"To challenge a king is to face the might of his people!" 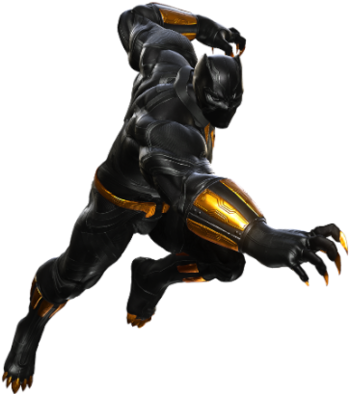 "Today, we fought as one, for the glory of Wakanda!"

The latest in a long line of rulers in the African nation of Wakanda, T'Challa follows in his father's footsteps as the warrior king known as the Black Panther, protecting Wakanda and the world from those who seek to rule it. When the worlds merged, his nation was joined with the desert city of Val Harbar. T'Challa has taken one of the city's top monster hunters as an assistant, but his will to defend his changed kingdom has not wavered.

"Target in sight. Ready to engage." 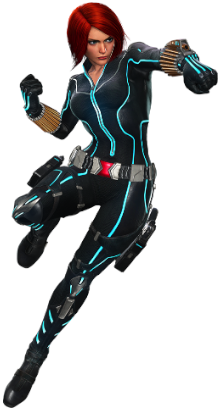 Natasha Romanova was a spy and assassin for the Soviet Union: brainwashed, trained since childhood, and genetically augmented to increase her physical abilities while slowing her aging. Once an enemy of Iron Man, she would later defect to the United States and become a member of the Avengers alongside her ally and lover Hawkeye. 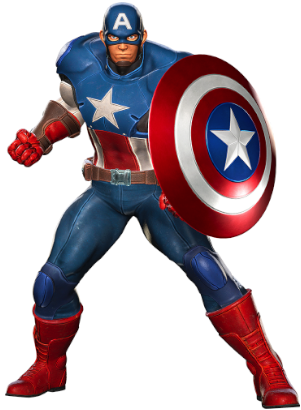 "For people, for justice, I will fight!"

The sole recipient of the Super Soldier Serum, Steve Rogers' deep love for his country and his unparalleled sense of justice make him one of the most respected heroes today. He has also been the long-time leader of the Avengers, a group dedicated to keeping the world safe from harm.

"Can we kick your butt quickly? I got to go feed my cat." 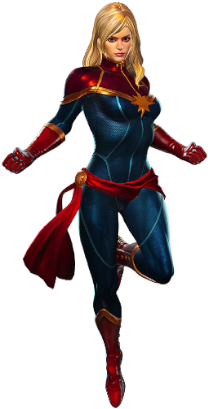 "The past is not important, only the future."

Air Force officer Carol Danvers was hit by a Kree Psyche-Magnetron explosion that granted her the alien's powers, transforming her into Ms. Marvel. However, an encounter with the then-mutant criminal Rogue robbed her of these powers and a space-faring mission with the X-Men granted her new energy-based powers. She later changed her name to Captain Marvel in honor of the original Captain Mar-Vell.

"One does not need the Eye of Agamotto to foresee this outcome." 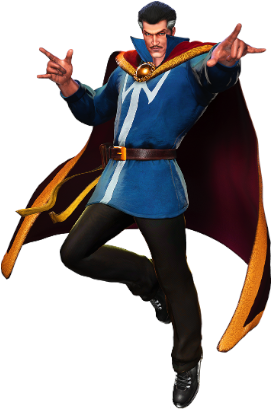 "The Master of the Mystic Arts bows to no one!"

Dr. Stephen Strange was a surgeon of peerless skill and talent until a car accident left the nerves in his hands damaged, rendering him unable to perform surgery. He desperately searched the world for a cure, and in his journeys, met and studied under the Ancient One of Tibet, in time becoming the Sorcerer Supreme. Having gained superior insight and knowledge through his studies, as well as obtaining valuable knowledge and consultation from other heroes, Strange acts as a consultant for all things related to the paranormal.

"We'll have them beg for their miserable lives." 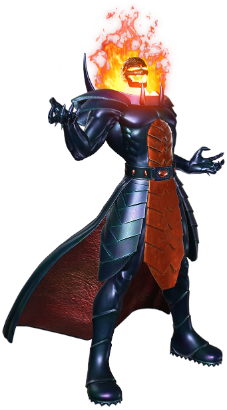 The nemesis of Doctor Strange, Dormammu is an energy being and one of the most wicked and powerful native of the "Dark Dimension". Wishing nothing less than to conquer all of life and the afterlife, he aims to rewrite the laws of reality so all would suffer for his glory.

"You hesitate, you die." 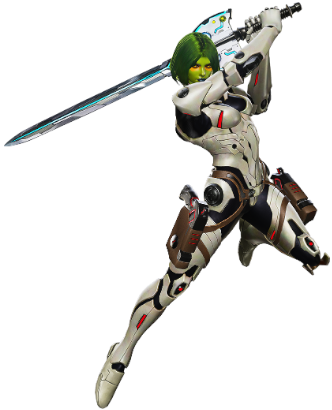 "Eliminating the target, that's my job."

One of Thanos' daughters, she's rejected her father's maniacal ways in favor of protecting the galaxy from his madness, first as a member of Adam Warlock's Infinity Watch and later as a part of Peter Quill's Guardians of the Galaxy. 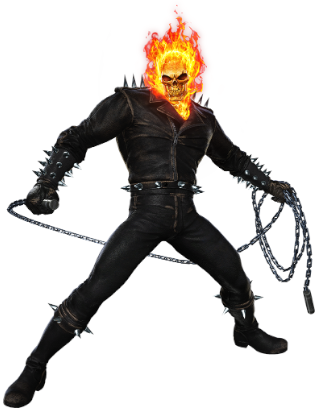 "You have challenged my hell-spawn power... and lost."

Johnny Blaze was a professional stuntman who made a deal with Mephisto to save his ailing father from cancer in exchange for his immortal soul. When his father died in a stunt gone wrong, Blaze realized he made a grave mistake and turned back on his deal. In revenge, Mephisto bound Blaze's soul to a demon's, transforming him into the Spirit of Vengeance, Ghost Rider. With his newfound control over hellfire, Blaze set about using his powers to protect the innocent and punish the wicked.

"I've got an arrow with your name on it." 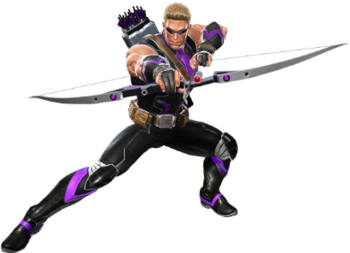 "Always on the mark."

Joining the circus after the death of his parents, Clint Barton learned the art of archery and became a very good trick shot. Under the alias Hawkeye, Barton accidentally fell under the charms of the then-Soviet spy Black Widow and faced down Iron Man. After realizing the error of his ways, Barton was accepted into the Avengers to make up for his past deeds and has remained a stalwart member since.

"Hulk's team is strongest there is!" 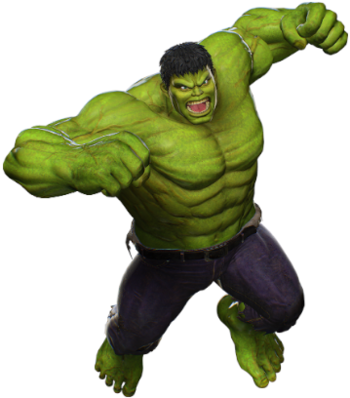 Debut: The Incredible Hulk #1 (May 1962)
Voiced by: Fred Tatasciore

Dr. Bruce Banner was a noted gamma-related scientist testing a special Gamma Bomb out in the desert when a young Rick Jones wandered out into the testing site. Banner saved Rick from the bomb, but was caught in the explosion. The gamma radiation transformed Banner, giving life to his repressed anger and helplessness as the rampaging monstrosity known as the Hulk. Though well-regarded as an ally, the Hulk's unpredictable nature makes it hard to figure out if he will be an ally or an obstacle.

"This is a great opportunity. I always wanted to test my suit out on you." 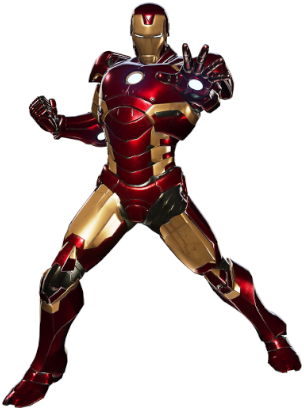 Once the foremost arms manufacturer and dealer in the world, Tony Stark realized the error of his ways when he was captured in a war-torn country by a terrorist group that used his weapons. Using his quick wits and engineering know-how, he constructed a suit of mechanical armor to help him escape. Ever since, he improved the battle suit to become Iron Man, and has dedicated himself to protecting the peace as a respected member of the Avengers. 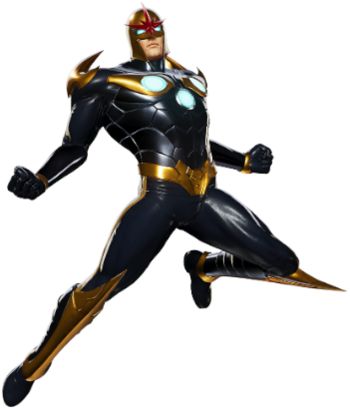 "Whoever called me cute just now, step forward so I can kill you!" 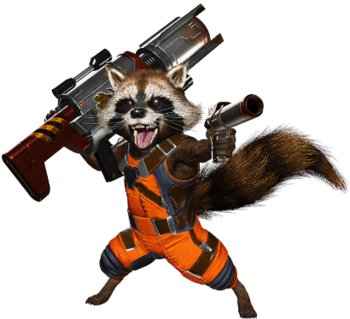 A denizen of the mysterious and crazy Halfworld, Rocket gained his first taste of really crazy adventures when the Hulk was accidentally teleported there. After many oddball adventures and encounters with various alien races, Rocket has cooled his heels with the ever-crazy Guardians of the Galaxy alongside his best friend, the plant-like Groot.

"You wanna take us on? My condolences." 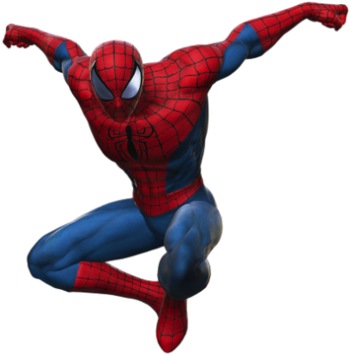 "All in a day's work for your friendly neighborhood Spider-Man!"

Bitten by a radioactive spider at a science experiment, Peter Parker initially used his Spider powers and bright costume to be a showman. However, when his beloved Uncle Ben is murdered by a crook he failed to catch, Peter learned that With Great Power Comes Great Responsibility, becoming the Amazing Spider-Man.

"There is no one above me." 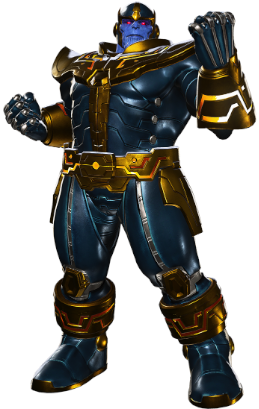 "I will take everything by my hand."

The Mad Titan, Thanos seeks many ways to eradicate the universe and win the love of Mistress Death herself. His path has also put him in sight of the Infinity Stones themselves.

"Thou wishest to test thy strength against mine? By all means!" 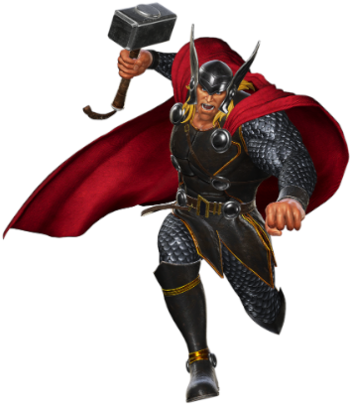 "A king cannot let himself be defeated."

The son of Odin himself, Thor was banished to Earth for his selfish ways and, as Dr. Donald Blake, became humbled and learned to cherish all. Welding the mighty enchanted hammer Mjolnir, Thor defends both Asgard and his adopted Midgard (Earth) as the mighty God of Thunder and an Avenger.

"I am the summit of perfection in this universe!"

An android developed by Dr. Hank Pym (better known as Ant-Man) when he began dabbling in robotics. He automatically rebelled against his creator and has not only been a thorn in the side of Pym's teammates the Avengers, but also given them various allies, including The Vision, Jocasta and Victor Mancha. 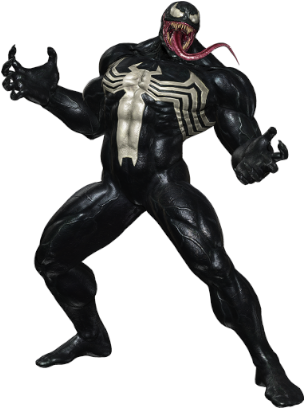 "You were not a challenge! Give us more worthy prey!"

Eddie Brock was once a reporter for the Daily Bugle before Spider-Man unwittingly debunked his exposé on the Sin Eater serial killer, leading to a series of events that ruined Eddie's life. Blaming his misfortune on the Wall-Crawler, Eddie stopped by a church to pray for forgiveness before committing suicide. There, he encountered a symbiotic alien life-form called a klyntar, which had once been bonded to Spider-Man, taking on the appearance of a black costume and enhancing his powers while also making him more aggressive. Discovering that the symbiote was trying to permanently bond with him, Spider-Man had forced it off of himself and tried to kill it, but had only succeeded in enraging it. The vengeful symbiote bonded to Eddie, granting him all of Spider-Man's powers and transforming him into the monstrous anti-hero Venom.

"I'm the Winter Soldier. Nothing but a ghost."

"I've learned to live with my guilt. That's what pushes me to be better."

James Buchanan Barnes, better known to his friends as "Bucky", was a young soldier who fought alongside Captain America as his sidekick until his death in 1945. What no one realized was that, like Captain America, Bucky's body was preserved in ice following his "demise". He would be found by the Soviets, who brainwashed him and revived him as the "Winter Soldier". Maintaining his youth via cryo-stasis when not on a mission, Bucky has been transformed into a deadly assassin, gifted with a prosthetic arm made with vibranium and a deadly, ice-cold demeanor.