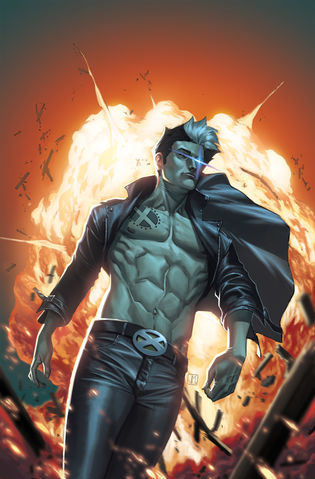 Nate Grey first appeared in X-Man #1 (March, 1995), created by Jeph Loeb and Steve Skroce. X-Man was originally planned as a four-issue miniseries that was part of the Age of Apocalypse crossover. It was later promoted to an ongoing series thanks to Popularity Power. Initially written by Jeph Loeb, it changed several writers before Terry Kavanagh came aboard; he wrote the book for most of its run. The series lasted for 75 issues (March, 1995- May, 2001).

Nate was created by his universe's version of Mister Sinister using DNA taken from Cyclops and Jean Grey (in the main universe Sinister had to manipulate Cyclops into marrying a clone of Jean Grey to achieve the same result) to create a being powerful enough to destroy his nemesis, Apocalypse. Nate was one of four beings that were accidentally transported from the Age of Apocalypse reality to the main Marvel Universe after it was destroyed due to a combination of changes to history and the explosion of a Cosmic Keystone. (The other survivors being Sugar Man, Holocaust and Dark Beast—all villains.)

The book followed Nate's exploits at finding his own place in this new world as well as dealing with various villains trying to manipulate him for his vast superpowers. In 2000, it was heavily Retooled and a year later cancelled because Joe Quesada thought that there were too many X-Books. Nate was killed off in the last issue and stayed "dead" until a point during Dark Reign where he under went a Unexplained Recovery and went up against Norman Osborn and his team of Dark X-Men before being captured. After Osborn's defeat, he was captured again by Sugar Man but rescued by the New Mutants and then joined the team.

As of Marvel NOW!, he was at a loose end, with a brief appearance in Fearless Defenders, a mention in All New X-Men, and a mention and an appearance in two issues of Cable's 2017 run being the only hints that the Marvel editorial staff even remembered that he exists. This, however, changed when he returned in 2018's Uncanny X-Men, which leads into an X-Event in January 2019 called Age of X-Man.