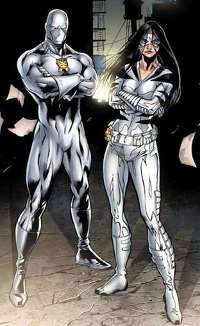 The White Tiger is a superheroic identity held by three related Puerto Rican superheroes in the mainstream Marvel Universe.

The original White Tiger was Hector Ayala, who happened across the three mystical amulets worn by the now-obscure 1970s super-team the Sons of the Tiger. The amulets were pieces of an ancient artifact from K'un-L'un. When Hector wore all three at once, it gave him superhuman strength, speed, and agility, as well as a working knowledge of K'un-L'un-style kung fu, which he used to defend his neighborhood.

The character first appeared in Deadly Hands of Kung Fu #19 (December, 1975), created by writer Bill Mantlo and artist George Pérez. He held his own series up to issue #32 (January, 1977). It included crossovers with other heroes of the time such as Jack of Hearts and Shang Chi. The series ended in a Cliffhanger with Hector and the Sons of the Tiger finding themselves mysteriously drawn to the same location. It was never resolved.

Hector was briefly Spider-Man's sidekick in the 1970s, particularly in the early issues of Spectacular. He first appeared there in issue #9 (August, 1977) and was a regular cast member to #32 (July, 1979). All these appearances were written by Bill Mantlo. He made a few other appearances at the time, guest-starring in the title of the Human Fly and briefly joining The Defenders.

Then Roger Stern took over writing Spectacular Spider-Man. Issues #49-52 (December, 1980-March, 1981) featured what was supposed to be the last storyline for the White Tiger. Hector returns home one day to find his parents and sister murdered. He goes on a hunt for the killer and finds himself facing Cape Buster Gideon Mace and his organization. The murders and the investigation were all part of Gideon's trap and the Tiger fell into it. He gets shot twelve times and struggles to survive in a hospital bed. Once conscious enough to know what he is doing, Hector disposes of the amulet and flees New York City for good, ending his career.

The White Tiger disappeared for decades, until Brian Michael Bendis brought him back for a Daredevil storyline in 2002. According to this story, Hector eventually retired from superheroics at his girlfriend's insistence. Years later, he put the costume and amulets back on, but wound up as a suspect in a murder trial after intervening in a pawnshop robbery gone bad. Despite his innocence, Hector was convicted, and guards around the courthouse shot him dead while he was trying to escape.

The amulets then passed to Angela del Toro, Hector's niece and one of the FBI agents charged with investigating Daredevil's secret identity. She was drawn to the life of a superhero after going into action alongside Daredevil, and was the star of her own six-issue limited series written by Tamora Pierce. Unfortunately, after that Angela was killed and subsequently resurrected as an agent of the ninja clan known as the Hand.

After the events of the "Shadowland" crossover, the amulets reappeared in the hands of Hector's younger sister Ava Ayala. In the mainstream Marvel continuity, she was a student at the Avengers Academy. She also appears as a S.H.I.E.L.D. agent in the Ultimate Spider-Man cartoon show.

After graduating from the Academy, Ava took a job working for Luke Cage as part of his Heroes for Hire. During their first outing, during the Infinity crossover, Ava used her amulets as a mystic link to an ancient spirit called the Tiger, which represented the "First Enemy" of humanity: the predator in the shadows that early humans quickly learned to fear. The Tiger used Ava as an avatar, but soon came to regret it. Ava engaged the Tiger in a contest of wills and won, pointing out that the Tiger was no longer as frightening to humanity as it once had been, and thus gaining greater access to its power. She served as a member of Cage's volunteer-led, street-level Avengers team before the 2015 Secret Wars crossover.

She then served as a member of Sunspot's "Avengers Idea Mechanics" field team. After an adventure where she successfully managed to purge Angela of the remnants of her Hand brainwashing, Ava opted to retire and destroyed the original White Tiger amulet.

Not to be confused with the novel The White Tiger.

Hector Ayala is the first Puerto Rican superhero in the history of comics, and Marvel's first superhero of Latino descent. Hector is the uncle of Angela del Toro and the brother of Ava Ayala. 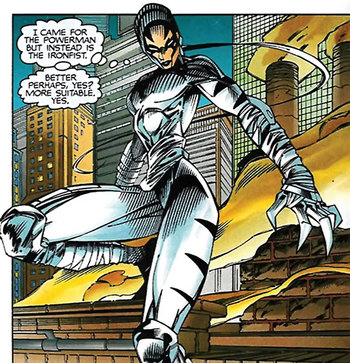 An actual white Bengal tigress evolved into a woman of East Indian descent.

The fourth character to use the name White Tiger. Angela del Toro is the niece of the original White Tiger Hector Ayala and the niece of Ava Ayala. The source of her powers is the Jade Tiger amulets she inherited from her uncle. 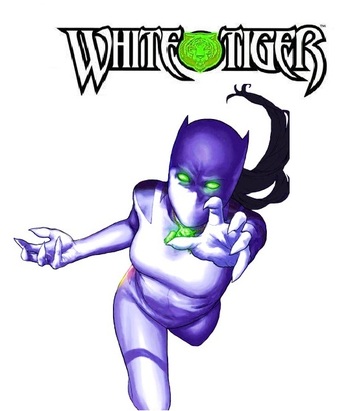 The fifth character to assume the White Tiger mantle, she is the younger sister of Hector Ayala as well as the aunt of Angela del Toro. By this point, the tragedies that have occured to her family mean Ava is much less enamoured of the super-hero life, and the mantle she's inherited.

The Tiger God
A primordial tiger-god, born from early mankind's fear of what lies in the dark, and the source of the White Tiger amulet's powers, forever seeking a host so it can roam free in the world once again.