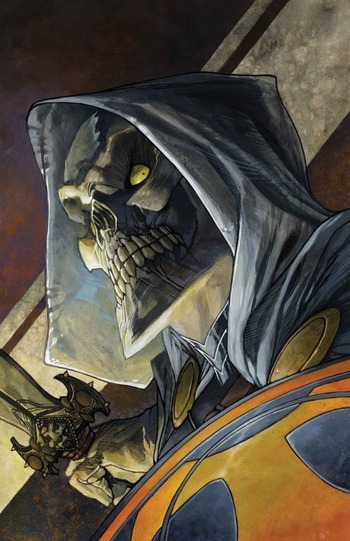 "Personally, I think we've done enough of the beating and torture and I'm ready to move straight to the beheading."

"That gig — the Villain Schools — I had to get out of it. Think about it. All my clients were guys who needed training. It was always, 'C'mon, Tasky, front me the training. I'll make good after my first job. I'm gonna be huge, man. You just gotta teach me that badass Punisher move I saw on Entertainment Tonight." And the heroes, swinging in to bust up the free enterprise I'm engaged in. And every time they do? I gotta find a new abandoned warehouse or a new abandoned drilling platform or, would it had never been so, a new circus to take over. Overhead? You don't know what overhead is until you've seen what a guy gets paid to scoop up elephant %?$#!"
— Taskmaster
Advertisement:

Taskmaster (Tony Masters) is a Marvel Comics character. He first appeared in "Avengers" vol. 1 #195 (May, 1980), created by David Michelinie and George Pérez.

A former S.H.I.E.L.D. agent, Anthony Masters has the unique ability to copy the movements, and, therefore, skills of those he witnesses, which he calls "photographic reflexes". Though he occasionally uses his abilities as a mercenary and assassin, he prefers to operate behind the scenes, operating as a consultant and training instructor for anyone who can afford to pay for his services.