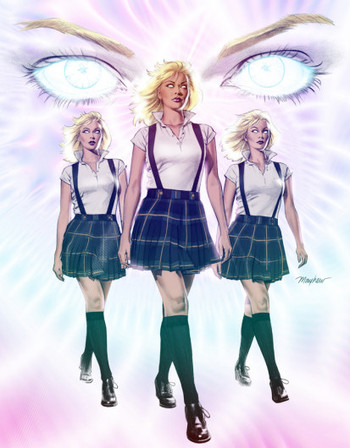 The Stepford Cuckoos, also known as the Three-in-One or Five-in-One, depending on how many are alive at the time, are a set of Marvel Comics characters created by Grant Morrison and Ethan Van Sciver, first appearing in New X-Men #118 (dated November 2001).

Introduced as a mutant quintet comprised of Celeste, Esme, Irma, Phoebe, and Sophie, as The Cuckoos are genetically-engineered clones of Emma Frost. Conceived as "Weapon XIV", they were an attempt to create a mass-killing weapon against mutantkind, specifically through telepathic assault.

As the genetic daughters of Emma Frost, they're a devastatingly powerful telepath hive mind, and have shown themselves to be worthy of hosting the Phoenix Force.

Outside of comics, the Cuckoos have appeared in other media. Most notably, they (specifically Esme, Sophie, and Phoebe) appear on FOX's X-Men drama The Gifted, portrayed there by Skyler Samuels. These versions of the characters are shown to be mutant extremists working with the Hellfire Club, eventually getting caught up with the efforts of the Mutant Underground.

The Stepford Cuckoos appear in:

The Stepford Cuckoos provide examples of: