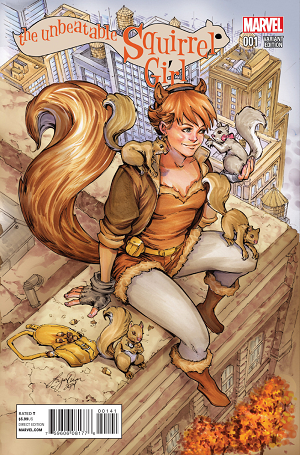 Advertisement:
"Maybe it's just me, but I'm not crazy about super hero stories where everything's all dark and moody. Personally, I like the ones where good guys fight giant apes on the moon and stuff. Remember those? I do. That was back when comic book worlds were places you wanted to escape to... not from."

Despite the silly name, Squirrel Girl is one of the most canonically powerful superheroes in the entire Marvel Universe. According to her official Marvel powergrid, all of Doreen's stats are through the roof, putting her at the same level as the Living Tribunal. Stats aside, her powers include enhanced strength, speed, reflexes, agility, and leaping ability "proportionate to that of a squirrel". She has also small, sharp claws rather than fingernails and retractable knuckle spikes—both principally used for climbing. She can speak with squirrels, who tend to do her bidding because of how well she treats them. Oh, and she has a semi-prehensile squirrel tail and her lips taste like hazelnuts.

Squirrel Girl has appearaed in the following works: