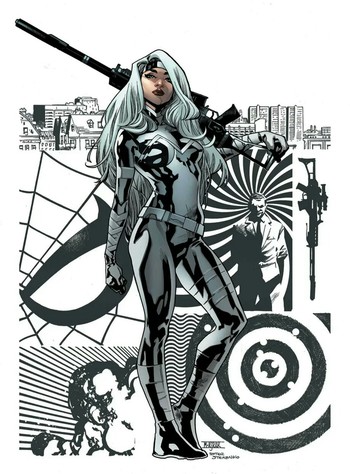 Silver Sable is a well-known female mercenary in Marvel Comics. Originally appearing in Spider-Man's series, she's been both an ally and a foe to the webslinger. She first appeared in Amazing Spider-Man #265 (June, 1985), created by Tom DeFalco, Ron Frenz, and Josef Rubinstein.

Joining the Wild Pack at the age of 17, Silver Sable served as second-in-command until the death of her father, Ernst Sablinova. Based in Symkaria, a tiny country sharing a border with Latveria, the Wild Pack began offering its services internationally under Silver Sable's leadership. Eventually gaining approval from the Symkaria government, the Wild Pack would become one of the country's largest economic contributors.

As the Wild Pack often takes on contracts to capture various supervillains, Sable and the Wild Pack have crossed paths with other heroes in the Marvel Universe a fair number of times, particularly Spider-Man. Though more stand-up heroes like Spider-Man and Captain America tend to dislike her callous demeanor and mercenary ways, she usually remains a trustworthy (if unpredictable) ally of justice, and more financially-minded characters like Paladin or Sandman have no problems working with her, or even for her.

Sable was apparently killed in the Ends of the Earth storyline in Amazing Spider-Man, sacrificing herself to help prevent Doctor Octopus from conquering the world, but she later reappeared alive.

Silver Sable has appeared in the following works: