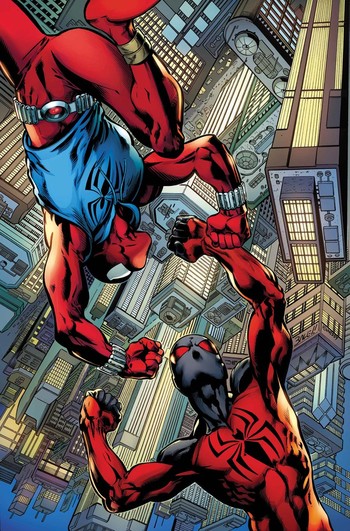 "All of the power. None of the responsibility."
Advertisement:

Scarlet Spider is an alias that has been used by multiple characters in the Marvel Universe, with the common trait of them being clones, the two most famous to bear the title being clones of the famous superhero Spider-Man specifically, and created during The Clone Saga.

The original character to handle the title was Ben Reilly, one of the clones of Peter Parker, who used it as a distinction from Peter. The character was one of the few things well-received in the otherwise infamous Clone Saga. Eventually, Ben took over as Spider-Man after a complicated story that made it unclear who of him or Peter was a clone. He was eventually Killed Off for Real by the Green Goblin, and Peter Parker re-assumed the Spider-Man identity and was established as the original Peter Parker and that Ben was the clone.

The next time Scarlet Spider was actually a team of three Super Soldier clones of a recently killed Avengers Initiative recruit Michael van Patrick, that wore variations of Spider-Man's then recent Iron Spider armor. Named Michael, Van and Patrick, they briefly aided Peter Parker in attempting to cover up his recent reveal of his identity during the events of Civil War. Afterwards, during the course of their adventures, they discovered their clone heritage but by the end of the series only one of the three was still alive and went public with his story to help bring the darker elements of the Initiative to justice.

Another of Peter's long-disappeared clones, Kaine, who was also part of The Clone Saga, came back during the Grim Hunt arc, where he made a Heroic Sacrifice for Peter Parker and was seemingly Killed Off for Real. Kaine returned in the Spider-Island arc, resurrected as a mutated minion of the Jackal. He was eventually cured — with enhanced powers identical to the ones Peter once possessed — by Spider-Man, and helped him defeat the arc's Big Bad. After that, he left Manhattan, taking Peter's "Big Time" stealth suit with him, and tried to leave for Mexico.

Kaine Parker is the star of the 2012 series written by Christopher Yost. When passing through Houston, Texas on the way to Mexico, after breaking up a human trafficking ring on his way out of town, Kaine finds himself linked to a young girl and a group of Houston residents and eventually decides to stay. Due to Madame Web hacking the suit's color modification into being stuck, local media and people dubbed Kaine the Scarlet Spider. Compared to Ben Reilly, Kaine's incarnation of the Scarlet Spider is darker and more violent due to his past and struggles with his heroic impulses, but Kaine constantly finds himself drawn into doing good. While his title ended at Issue #25, he appeared in the short-lived Marvel NOW! reboot of New Warriors, also written by Yost. A Spider-Verse tie-in mini-series, called Scarlet Spiders was released featuring Kaine Parker and Ultimate Jessica Drew alongside an alternate version of Ben Reilly that survived.

In the story Dead No More: The Clone Conspiracy it was revealed that Ben Reilly was again cloned by the Jackal in an attempt to improve his cloning technology. In the process, he was driven mad and became the Jackal himself and plotted to turn everyone in the world into a clone to cure disease and death... against everyone's wishes, and while manipulating many, many people. Peter Parker would stop him, but Ben wound up on the run as a result, Peter allowing him to leave but Kaine out to deliver justice onto his criminal clone brother.

The Ben Reilly: The Scarlet Spider series focused on Ben and his struggles as a result of his actions as the Jackal, while simultaneously featuring Kaine hunting his clone brother while also trying to make more of a life for himself. It too ended after 25 issues.

Both Ben and Kaine would feature in the Spider-Geddon crossover.

The Scarlet Spiders provide examples of: 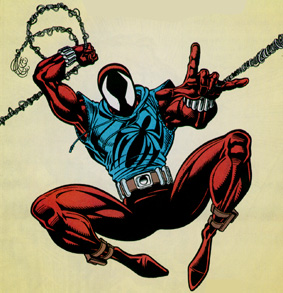 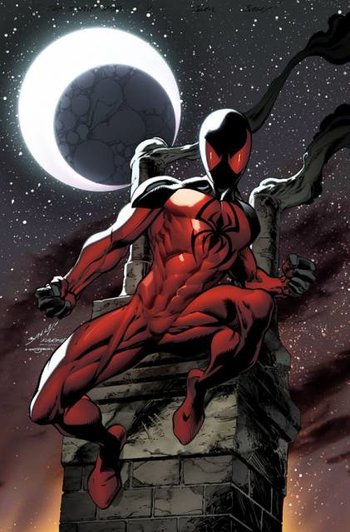 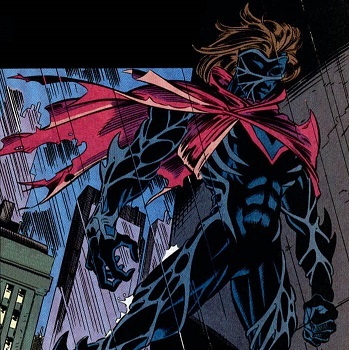