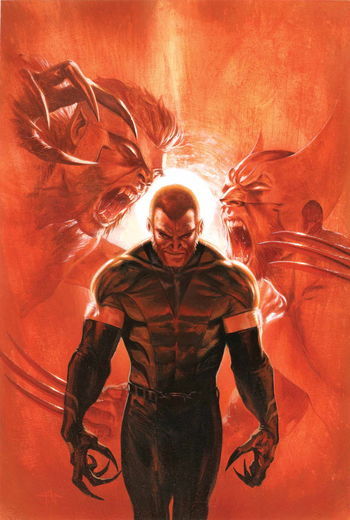 "Now it's my turn to see if I can find that spirit to overcome my past. The heart to push through the glaring eyes that only see the beast I was. You'll see Logan. I'll do it. I'll find it. Spirit of a Wolverine."
— Victor Creed, AXIS #9
Advertisement:

Victor Creed, also known as Sabretooth, is a Marvel Comics character. He first appeared in Iron Fist comics in 1977 where he's depicted as a Serial Killer. Later, he was transplanted into Wolverine and X-Men comics as a vicious mutant assassin who is responsible for numerous deaths both as a paid mercenary and for his personal pleasure. He is a sadistic, unrepentant, bestial mass–murderer with superpowers and is proud of that fact, believing both Humans and Mutants are Bastards and that he's just the only one honest enough to recognize it, and embrace the monster within. This plays directly into his relationship with Wolverine, his Arch-Enemy, Good Counterpart and Shadow Archetype with nearly identical powers, with whom he shares a long and complicated past Shrouded in Myth, with neither of them really sure how they first knew each other or why Victor feels such a grudge against him.

What is consistent, though, is that Creed is obsessed with Logan and will give him frequent Breaking Lectures about how he should turn to The Dark Side and become an animal like him, whilst simultaneously hell–bent on showing that he is Logan's Always Someone Better. Though tides changed over the years where Logan began beating him in their exchanges.

During the AXIS event, he's one of villains inverted to the side of heroes. And when the reinversion happened, he was close to Iron Man, who had devised a shielding which protected him from the reinversion, which also prevented Sabretooth from becoming evil again. Sabretooth decided to follow Wolverine's example and try to do good, but before that, he turned himself in to the authorities to pay for the crimes he had committed. He worked with different teams, such as Rogue's Avengers Unity Division, Magneto's X-Men, briefly teamed up with Iron Fist, and finally was "recruited" by Old Man Logan, serving his longest post-AXIS team–stint. When Logan and Warpath left the team, Victor took over as leader. They successfully accomplished many jobs under his leadership, even killing William Stryker for good. Through a series of tragic events, Creed was reverted to his old self to pick up where he left off in his evil.

He moved to the Island of Krakoa with other mutants, including Xavier, Magneto, and the X-Men, having made the island their own Sovereign Nation. But his bloodthirsty ways and murder of humans led to his exile beneath Krakoa in stasis where he will remain conscious but immobile forever… or maybe not.

Sabretooth has appeared in: