Quasar is a Marvel Comics superhero created by Don Glut, Roy Thomas and John Buscema. Making his debut in Captain America #217 (January, 1978), Wendell Elvis Vaughn wields the Quantum Bands: powerful wristbands that tap into the unlimited power of the Quantum Zone. Originally naming himself Marvel Boy after the Silver Age hero who owned a similar pair of wristbands, Quasar gradually carves out his own identity as one of Marvel's most powerful cosmic heroes.

Declared unfit for field work, for not having a "killer instinct", after graduating from S.H.I.E.L.D. Academy, Vaughn was offered a job at a Stark International research facility where his father, Dr. Gilbert Vaughn, was experimenting with the Quantum Bands, two alien wristbands of great power left behind after the death of Crusader, the original Marvel Boy's evil duplicate. After an attack by A.I.M. forces Vaughn to use the Bands in self defense, the second Marvel Boy is born. Now a charter member of the newly-created S.H.I.E.L.D. Super-Agents, Vaughn later changes his name to Quasar after his father speculates that the Quantum Bands get their power from actual quasars: Quasi-Stellar objects.

As Quasar, Vaughn learned the true origins of the Quantum Bands from the Cosmic Entity Eon. The Bands were to be used by the Eon's champion, the Protector of the Universe, a title once held by Captain Mar-Vell. The Protector's role was to keep Eon alive, as assassins would attempt to kill him to attain Cosmic Awareness. Accepting the title, Vaughn leaves Earth for a time until a rift develops between himself and Eon. Discovering that his father has been dead for some time, Quasar quits his job as Protector after learning that Eon had been impersonating Dr. Vaughn out of self-preservation. Eon believed that a Cosmic Assassin killed the doctor to weaken Vaughn's mental stability enough to make a move. The assassin, Maelstrom, reveals himself to Vaughn on Earth. Vaughn's powers could not touch Maelstrom, so the assassin cut off Quasar's forearms and took the Quantum Bands for himself. Dying, Vaughn encounters the spirits of Captain Mar-Vell and his father, who convince Quasar not to give up. Vaughn dies, stabbed through the heart by his own personal death avatar, Kid Reaper. Reappearing as an energy being in the Eonverse, Quasar kills Eon to prevent Maelstrom from acquiring the Cosmic Awareness, and in a cosmic battle for the fate of the universe, is able to trick Maelstrom, causing his death.

Quasar later joined the The Avengers after helping them in battle against Super-Nova.

Vaughn would later be resurrected as a quantum energy being for a brief period of time within the pages of Nova before he was restored to flesh and blood on a journey to another universe. After the events of The Thanos Imperative, he would go on to join a short-lived group of other cosmic heroes call 'Annihilators'.

Phyla-Vell later acquired the Quantum Bands at the end of Annihilation, and became the new Quasar in Annihilation: Conquest Prologue #1 (August, 2007).

Now in possession of the Quantum Bands, Phyla-Vell uses her new powers to help the people who survived the 'Annihilation Wave'. Later, Phyla hones her skill with the Quantum Bands during Annihilation: Conquest - Quasar series, eventually defeating the evil android Super-Adaptoid and taking up Quasar's mantle for the first time. After Conquest, Quasar joins the new Guardians of the Galaxy.

Phyla-Vell's time as Quasar is short lived, coming to an end after losing the Quantum Bands to the resurrected Maelstrom. Forced to make a deal to save Moondragon, her lover, Phyla agrees to become the new avatar of Oblivion, afterwords adopting the name Martyr; meanwhile, Wendell came back from the dead and reclaimed the Bands from Maelstrom, by cutting them off his hands in a very familiar manner. Phyla was later killed during the resurrection of Thanos.

While working at Pleasant Hill, a gated community holding super villains brainwashed by Kobik, S.H.I.E.L.D. Agent Avril Kincaid encountered a retired Wendell Vaughn. As part of a contingency plan for if Pleasant Hill ever lost control of Kobik, Vaughn gave the Quantum Bands to Kincaid. In the aftermath of the events that transpired at Pleasant Hill, Kincaid becomes the new Quasar with Vaughn acting as her mentor.

Kincaid was later seen trying to prevent an attack by the Chitauri, but was apparently killed in action. Her apparent death leads the United States government to give Captain America control of the military and law enforcement, as Steve Rogers also assumes control of Hydra. It is later revealed that Kincaid is in a comatose state.[5] When she awakens, she destroys the planetary shield that the Hydra Steve Rogers has been using to keep some of Earth's most powerful heroes off-planet. However, this act seemingly costs Avril her life, with Captain Marvel stating that Avril died after bringing down the shield.

After Avril's apparent demise, Wendell Vaughn re-assumes the Quasar mantle. However, after becoming trapped in a black hole, Vaughn catches a glimpse of Avril, who is still alive, but lost somewhere in space.

When Vaughn, Beta Ray Bill, and the Silver Surfer, among others, found themselves trapped a black hole, Vaughn used another set of Quantum Bands to assist the Surfer in escaping. In doing so, their combined powers, and the gravity of the black hole, revealed the presence of Kincaid, who had survived her sacrifice, but was trapped in the black void of outer space.

After months of trying to work it out, Wendell and Avril found that by striking the Bands against each other they could exchange places, similarly to Rick Jones and Mar-Vell years before. With this new possibility on the table, the Guardians of the Galaxy could now count on both Quasars, using whichever was better for the mission at hand.

Quasar has appeared in:

Bearers of the Quantum Bands 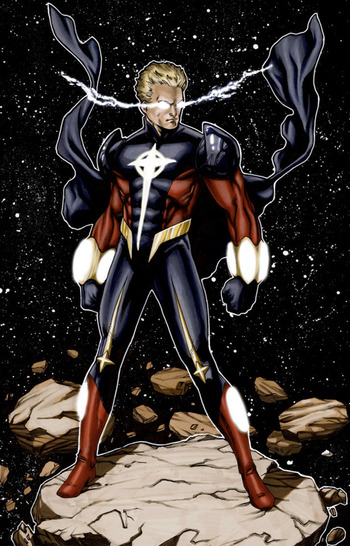 A former agent of SHIELD, Wendell Vaughn is a cosmic-powered superhero known as Quasar. Equipped with energy-manipulating Quantum Bands, Quasar was appointed Captain Marvel's successor as Protector of the Universe by Eon, and has been a valued member of the Avengers and ally to the Guardians of the Galaxy. In the past, he was in charge of Project PEGASUS, led the short-lived teams the Starmasters and the Annihilators, and acted as Avatar of Infinity.

A S.H.I.E.L.D. agent formerly stationed in Pleasant Hill who became the new Quasar.