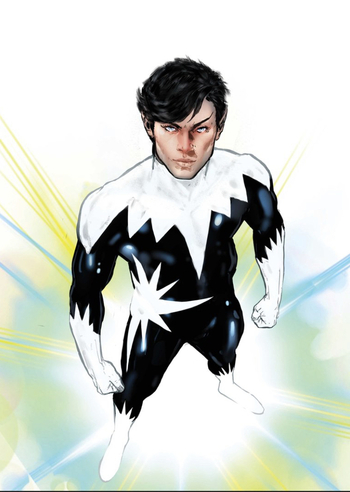 A French-Canadian mutant with the abilities of flight, super speed, and light manipulation, Northstar is notable for being the first (canonically) gay Marvel superhero, and one of the first ever. While his homosexuality was sometimes alluded to, then-editor-in-chief of Marvel Jim Shooter (as well as The Comics Code) prevented as much from being outright confirmed.

A mutant and the twin brother of Aurora. While his sister went to a religious school after their parents' death, Northstar was sent to live with his cousins the Martins. He eventually became an Olympic-level skier, though whether this was due to his powers or not was left ambiguous. He later, begrudgingly, joined Alpha Flight in order to meet his sister.

It wasn't until 1992 —thirteen years after his first appearance— that Scott Lobdell was allowed to let Northstar come out in the pages of Alpha Flight #106. He would later get married to boyfriend Kyle Jinadu in Astonishing X-Men #51, which was the first-ever portrayal of a same-sex marriage in mainstream American comics.

While he is most frequently associated with the X-Men nowadays, Northstar was initially introduced as a member of Alpha Flight —a superteam sponsored by the Canadian government— alongside twin sister Aurora, who more or less has the same abilities as him. Since then, Northstar has served as a reliable teacher at the Xavier School for Gifted Youngsters, and an on-off active X-Man. As of 2020, he's leading the new form of X-Factor.