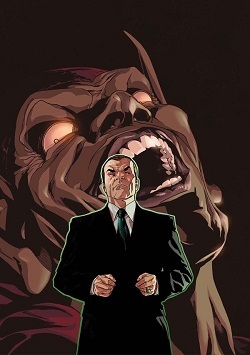 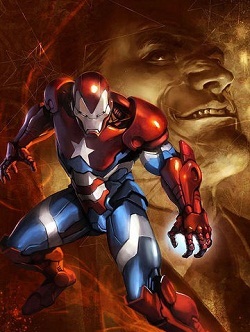 Not even in this identity, either.

"But you, Parker... How does it feel to once again, let a friend down? You seem to have quite a history of failing your friends and loved ones. Dear, sweet Gwendolyn, your deceased girlfriend who died so young. Your beloved aunt May, who asked for so little of you and received exactly that until she was taken from you. My son, Harry. You claimed to be his friend, his confidant, and when he needed you most, you failed him as you do everyone else who gets close to you."
— Peter Parker: Spider-Man #95
Advertisement:

The Arch-Enemy of Spider-Man, though between 2004-2015, he became more active in the Marvel Universe as a whole before returning to Spider-Man titles again from Superior Spider-Man onwards. He became increasingly prominent in Civil War, an importance which led to his biggest role to date: the Big Bad of the Marvel Crisis Crossover event Dark Reign.

Following his defeat, Osborn escapes from the hospital and resumes the identity of the Green Goblin, vowing to defeat the new Spider-Man. To this end he dubs himself the "Goblin King" and takes over New York's criminal underworld, enlisting the help of Menace, Monster (Carlie Cooper after being splashed with the Gobin Formula), and Hobgoblin VII (renamed the Goblin Knight). Ultimately defeated by the good old Spider-Man, he still manages to escape. However, his escape wasn't clean as he had lost his powers thanks to a special nanotech vaccine created by the Superior Spider-Man. His search to restore his powers ultimately lead him to the Carnage symbiote, where Norman easily got the symbiote to realize the joy of slowly murdering people and convinced it to join with him. Its first order of business was purging the vaccine from his being, with Norman plotting to fuse the symbiote with the Goblin Formula. He ultimately did so, and became the Red Goblin - launching a new campaign to torment Peter in Go Down Swinging, at the end of which Spider-Man managed to destroy the Carnage symbiote and induced severe mental backlash that scrambled Goblin's mind — now believing himself to be Cletus Kasady, and Spidey to be Norman. Acknowledging that the Red Goblin's reign of terror is over, Spider-Man had simply left the now brain-dead Norman Osborn to his own leisure... this of course didn't last given that he later joined the Power Elite. Eventually in Absolute Carnage, the still lobotomized Norman was recruited by a resurrected Cletus Kasady in his crusade to awaken the symbiote God of Evil Knull, granting Norman a copy of the Carnage symbiote to carry out his goals. Suffering defeat again, it would be revealed in Ruins of Ravencroft that Norman somehow returned to his original persona...

His comics appearances are mainly in the pages of Amazing Spider-Man, Peter Parker Spider-Man, Civil War, Dark Reign, New Avengers, and others. He starred in his own miniseries, Osborn: Evil Incarcerated, showing his time in jail after Dark Reign. Norman Osborn has appeared in other media, including the Spider-Man Trilogy (played by Willem Dafoe, who reprises the role in Spider-Man: No Way Home) and The Amazing Spider-Man 2 (played by Chris Cooper), Spider-Man: The Animated Series, The Spectacular Spider-Man, Ultimate Spider-Man and Marvel's Spider-Man. He was also a playable character in Marvel Ultimate Alliance 2 and a boss in Marvel: Avengers Alliance and Marvel Ultimate Alliance 3: The Black Order. He's also a supporting character in Spider-Man (PS4). When stage musical Spider-Man: Turn Off the Dark played in New York he was played by Patrick Page.