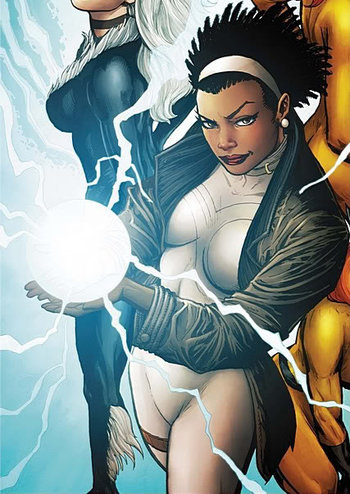 They said ... They said the Beyond Corporation never existed. They said none of it really happened. We came back changed —Me, Aaron, Elsa, all of us. Harder and stranger. But nobody cared. Oh, everybody humored me ... But nobody thought it was real. I spent a year remembering things that couldn't exist. Trying not to kill and killing anyway —And then they said it didn't happen— But they never let me forget, either. Oh, no. Change your look, change your life, you can never forget ... I bet it was funny. From the outside. I bet everybody had a real good laugh. Well. Auntie Monica's not ☠☠☠☠ laughing.
— Captain America and the Mighty Avengers #6 (2015)

Introduced as a lieutenant of the New Orleans Harbor Patrol, an accident involving an energy weapon exposed Monica to extradimensional energy, giving her a multitude of energy-related powers. She can convert herself into any form of energy on the electromagnetic spectrum, absorb and manipulate energy, and travel at the speed of light while flying in her energy form. Because of this, she's described as an "Alpha Level" superhuman by Sam Wilson, and is quietly one of the most powerful heroes in the entire Marvel Universe.

Shortly after gaining her powers, Monica adopted the vacant Captain Marvel name for herself, meaning she's the first woman —and a woman of color, at that!— to do so, even though Phyla-Vell (daughter of Mar-Vell) and Carol Danvers (formerly Ms. Marvel) have been more associated with that distinction.

While learning to master her powers, Monica sought help from The Avengers, who eventually accepted her into their ranks as a full member. It's worth noting that Monica is the first black woman to join the team, and only the third black Avenger overall, behind The Falcon and Black Panther. Not only was Monica a valued member of The Avengers, but she even led them for a spell, ultimately retiring from duty when she lost her powers during a mission.

Years later, Monica regained her powers and (hesitantly) conceded the Captain Marvel name to Genis-Vell (son of Mar-Vell), instead opting for a new alias: Photon. And then Genis decided he actually wanted to be called Photon too, so Monica agreed to give him the moniker, rebranding herself as Pulsar.

Monica didn't actually operate under the Pulsar name for very long — she gave it up sometime before appearing in Warren Ellis' Nextwave: Agents of H.A.T.E. Now simply using her birth name (while rocking dreads and a new badass longcoat), Monica utilized her experience as former leader of The Avengers to head up this new Ragtag Bunch of Misfits, which included Elsa Bloodstone, Boom Boom, and Machine Man.

It should be said that Nextwave's level of canonicity was up for debate for years, and it was only established in 2015 that its events actually did happen. As explained in Captain America & The Mighty Avengers, Monica and Co. were transported into an alternate universe and screwed with For the Evulz by the Beyond Corporation, and nobody believed them when they returned to Earth-616 and talked about it.

Nextwave ended after only twelve issues, but Monica continued to appear throughout the greater Marvel Universe following its cancelation. She was anti-Registration under Captain America's leadership during the Civil War, teamed up with Carol Danvers (the newly-minted Captain Marvel) while on a mission in the Gulf of Mexico, and even helped to take down Galactus. She also starred in the Sex and the City-esque limited series Marvel Divas, alongside Firestar, Black Cat, and Hellcat.

The Marvel NOW! initiative brought Monica onto a new iteration of the Mighty Avengers, where she served as Luke Cage's lancer. Monica continued to serve with the team until Earth-616 collided with Earth-1610, thusly ending the Marvel Universe. She'd planned to channel all her energy into destroying Earth-1610 — so as to avoid the destruction of her own home reality — but was captured by The Maker before she could try.

While Monica didn't appear in any major capacity during Secret Wars, she did return in the All-New, All-Different Marvel universe as a member of the new Ultimates, reuniting her with (fellow Mighty Avenger) Blue Marvel and frenemy Carol Danvers. As one could probably surmise from reading her history, Monica's definitely one of Marvel's more underrated characters who doesn't nearly get enough love.

Though Monica has only ever really appeared in comics and not much else, 2019's Captain Marvel features her mother Maria as a major supporting character, as portrayed by Lashana Lynch. This version of the character, a 90's contemporary of Carol Danvers' in the US Air Force, notably uses the callsign "Photon", which is also one of the many names Monica has used over the years. Monica herself appears in the film as a child, played by Akira Akbar. The adult version of Monica shows up in the Disney+ series WandaVision, portrayed by Teyonah Parris.