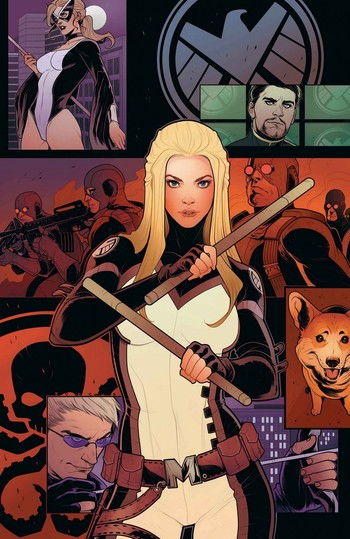 She may be a scientist, but she can kick your ass just as good as Cap and Tony can.
"Avengers Assemble! As in get your asses up and let's go!"
— Mockingbird
Advertisement:

Mockingbird. Avenger. Secret Agent. Badass. Biochemist. You name any type of female superhero, chances are she has been it once.

Barbara 'Bobbi' Morse was first introduced Astonishing Tales #6 (June, 1971), though it took a while for her to get her character down. At first she was hinted to have some kind of psychic powers, then it was never mentioned again. To make a long story short, Bobbi was introduced as a biochemist and fiancé of the missing Dr Paul Allan, only for it to turn out she was really undercover for S.H.I.E.L.D., and Allan was an agent of AIM. After spending time with Ka-Zar as a jungle lady and bouncing around a little, she settled as a S.H.I.E.L.D. agent and crime fighter.

She first used the codename 'Huntress' in Marvel Super Action #1 (January, 1976), but that was a one-shot. She next appeared as 'Mockingbird' in Marvel Team-Up #95 (July, 1980). She was reportedly given the nickname 'Mockingbird' for her penchant to insult, or 'mock', opponents while fighting.

After becoming a freelance agent, Bobbi met Clint Barton, AKA the then-former Avenger Hawkeye, who was working as a security agent for Cross Tech Enterprises. The company he worked for was secretly corrupt, and with Clint's help Bobbi took down Crossfire, the company's enforcer, and the two decided that, since they had natural chemistry, to skip the dating process and just get married. Bobbi joined Clint as a founding member of the West Coast Avengers, or WCA, and the two enjoyed a happy relationship.

Then, on a mission through time, Bobbi was hit with a love potion by the recently gone insane Phantom Rider, who believed Bobbi was destined to belong to him. After he had already consummated their 'relationship' with her, Bobbi came back to her senses and, traumatized by the ordeal, allowed Phantom Rider to die by falling from a cliff. She kept the truth to herself until Phantom Rider's spirit caught up with her and Clint in the present and the knowledge that Bobbi had killed someone put a great strain on their relationship. Unable to get past his hangups on killing, the two began to divorce...

...Until they worked past their problems and rebuilt their relationship...

However, as luck would have it, it turned out that Bobbi had been replaced by a Skrull imposter years ago and the Bobbi that died wasn't the real Bobbi, but a sleeper agent who thought she was the real deal. Bobbi spent the time on the Skrull homeworld, being tortured by a Hawkeye-disguised Skrull, until she killed them, infiltrated the Skrulls, and basically kicked a load of alien ass until she was freed and returned to Earth.

With her marriage to Clint over, the two decided to reunite their relationship, only for it to end when Clint and Bobbi realized that her lifestyle and his are too conflicting. During this time, she made her own spy agency, the World Counter-terrorism Agency (WCA), and joined the New Avengers, got some powers, and continued kicking a variety of ass. She later joined the Secret Avengers in its 2013 Marvel NOW! relaunch, though left when it was relaunched again.

Following a one-shot commemorating the 50th anniversary of SHIELD in 2015, it was announced she'll be getting her first ongoing series as a headliner, as part of the All-New, All-Different Marvel initiative. Written by Chelsea Cain and art by Kate Niemczyk, the book follows Bobbi as she deals with her newfound status as a super-soldier, and the medical issues that come with such a change. She'll also be a regular character in the new Agents of S.H.I.E.L.D. ongoing title.

Bobbi also got a cameo in one of the Micro-Episode prologues for The Avengers: Earth's Mightiest Heroes!, then later a full guest episode as Mockingbird. She returned in the second season as a supporting character during the Skrull Secret Invasion Storyline.

At one point, it was announced Bobbi would headline a live-action TV series — Jeph Loeb described the project as depicting a post-college Bobbi recruited by S.H.I.E.L.D. as she evolves into the character from the comics, ala Smallville— but it never moved past the development stage.

Bobbi ultimately did make her live-action debut in 2014, when she joined the Marvel Cinematic Universe during season two of Agents of S.H.I.E.L.D. — played there by Adrianne Palicki. Originally a recurring role, Palicki was upped to regular status for the back half of that second season. A Spinoff featuring Bobbi and Lance Hunter, her MCU love interest, was announced to be in the works for a 2015-2016 debut. Called Marvel's Most Wanted, Bobbi and Hunter would be forced to leave S.H.I.E.L.D. and team-up with Dominic Fortune after they're framed for some unknown crime that makes them public enemies. A Most Wanted pilot was shot but plans for the full series unfortunately fell through... after Bobbi and Hunter had been written out of Agents of S.H.I.E.L.D., ending Bobbi's MCU presence prematurely.

On the video game front, she was winnable as the first limited time Special Operations hero in Marvel: Avengers Alliance, and is now available if you can get enough SHIELD points. She's also featured in Marvel Future Fight, with both her 2000s outfit and her MCU outfit available.

The following tropes apply to Bobbi: