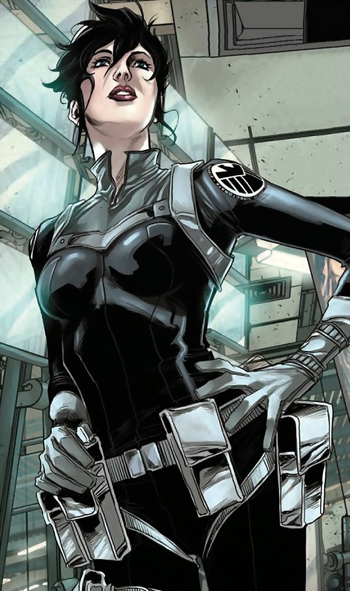 Maria Hill is a character who appears in comic books published by Marvel Comics that first appeared in New Avengers #4 (April 2005), and was created by Brian Michael Bendis and David Finch.

After the scandalous affair of the Secret War and its disastrous effect on New York City, S.H.I.E.L.D. director Nick Fury goes into hiding. S.H.I.E.L.D. agent Maria Hill, viewed by the leaders of several nations as being both an efficient agent and, more importantly in their eyes, not directly loyal to Fury or any of his core group, is appointed interim Executive Director, being expected to be loyal to United States interests before those of the United Nations, which S.H.I.E.L.D. is supposed to serve before any other country.

Hill quickly establishes new policies on super-powered heroes, as requested by the President of the United States and his peers in other national governments: to end S.H.I.E.L.D. support for the heroes. These policies are in full effect when Hill tries to prevent The Avengers from re-forming following the breakout at the Raft super-villain prison. However, Captain America's champion status allows him to form any team he wants for any mission he sees fit, while Spider-Woman's status as a S.H.I.E.L.D. agent gives her access to any files that the Avengers may require. With these two situations meaning that the Avengers could operate independent of Hill's authority while retaining access to the relevant information they need to complete their mission of tracking down the Raft escapees, Hill is convinced to leave the situation alone.

In the wake of events in the Savage Land, the Avengers suspect Hill of being complicit in various crimes, but lack the evidence to prove her wrongdoing, while Hill herself suspected the latest incarnation of the Avengers of harboring an illicit agenda in connection with, among other things, the "House of M" affair, to the point that she abducted Spider-Man and The Vision to question them about the situation even when dealing with the Collective. She eventually earns Iron Man's respect when she ignores the President's orders to nuke an island the Avengers were on at the time.

In the 2006–2007 miniseries Civil War, Captain America refuses to assist Commander Hill in preparations to arrest any superheroes who refuses to comply with the Superhuman Registration Act, seeing such activity as politically motivated, but Hill, arguing that Captain America must obey the will of the American people, attempts to arrest him, but he fights his way out and escapes. After the Act passes into law, Hill is one of its leading enforcers. She blackmails Wonder Man into actively supporting S.H.I.E.L.D.'s crusade to hunt down the superheroes opposed to the Registration Act. She sends Kree supersoldier Noh-Varr, already brainwashed, to capture the Runaways. She directs the Thunderbolts to capture Spider-Man after he goes rogue. After foiling an attack on Stark Tower, Hill admits to Tony Stark that she does not want her job as director of S.H.I.E.L.D. and thinks she should not have been offered it in the first place. She suggests that the only other person besides Nick Fury who should lead the organization is Stark himself. At the conclusion of the Civil War, Tony Stark is appointed the new director of S.H.I.E.L.D., with a displeased Hill his acting deputy director.

After being made Deputy Director, Maria Hill becomes a core member of Stark's S.H.I.E.L.D. cabinet and assists Stark in dealing with a sudden rise in various terrorist groups who have gained access to hyper-advanced biological weapons. Unlike the rest of the cabinet, Hill remains skeptical of a single conspiracy behind all these attacks. Subsequently, however, Hill becomes much more trusting in Stark's leadership, a trusted agent in her role as Deputy Director, and far less bound by conventional process, particularly after a confrontation with Dum Dum Dugan, in which he forces her to confront the fact that she was apparently willing to take actions that would allow innocent people to die while still sticking to "the book" because the alternative was to disobey orders. She eventually risks her career by locking down the United Nations under S.H.I.E.L.D. martial law so Stark can escape a tribunal going against him and track down the Mandarin.

During the 2008 Secret Invasion storyline, after the Helicarrier is disabled by Skrull invaders, Hill, who is left in charge in Stark's absence, confronts a number of extraterrestrial Skrulls, shapeshifters who can assume the appearance of anyone or anything, who are revealed to have replaced a number of S.H.I.E.L.D. agents. The Skrulls execute Hill, but this "Hill" is revealed to be a Life Model Decoy of Hill. Hill then activates the Helicarrier's self-destruct system, killing all the Skrull infiltrators on board, escaping via jet pack.

In the aftermath of the Skrull Invasion's failure, during the Dark Reign storyline, S.H.I.E.L.D is disbanded by the President, and Hill and Tony Stark lose their jobs, replaced by the newly appointed director Norman Osborn who then reforms the fallen S.H.I.E.L.D. into H.A.M.M.E.R. Hill tries to go about having a normal life, but Osborn dispatches H.A.M.M.E.R. to arrest her. She joins her former boss, Tony Stark, as a fugitive after he stole the Superhuman Registration Database, and he sends her on a mission to retrieve a hard drive and deliver the data to Captain America via Black Widow, all the while evading H.A.M.M.E.R. agents. They are eventually captured when H.A.M.M.E.R. intercepts an e-mail from Stark, but they are rescued by Pepper Potts, disguised as Madame Masque.