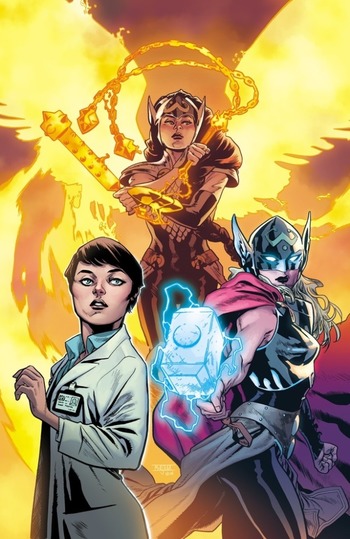 The Lives of Jane Foster note (From left to right: as herself, Valkyrie, and Thor)

Advertisement:
"I tend to the living as a doctor. I minister to the dead in the morgue. And I fight for them both — as the Valkyrie."
— Jane Foster, Jane Foster: Valkyrie #5

Jane has appeared often in other media, either in her civilian form or as Thor. Most notably, she was portrayed by Natalie Portman in the Marvel Cinematic Universe, appearing in Thor and its 2013 sequel Thor: The Dark World. She hasn't appeared in the MCU since the latter film, save a scene in Avengers: Endgame revisiting events from 2013, with Thor himself explaining they'd broken up between The Dark World and Thor: Ragnarok. Following Endgame, she is set to officially return in Thor Love And Thunder, where she is set to become the other Thor. In animation, she appeared in The Avengers: Earth's Mightiest Heroes!, voiced by Kari Wahlgren and as Thor, she featured in Avengers: Secret Wars, voiced there by Erica Lindbeck. She's also a playable character (usually as Thor) in many Marvel-based video games.