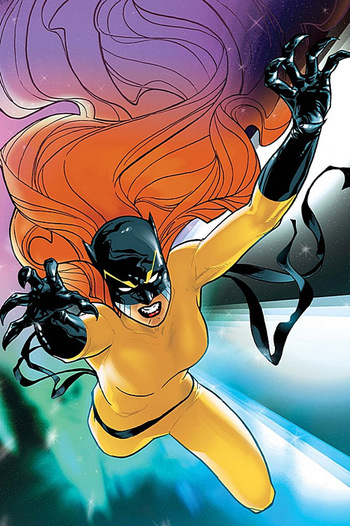 When Patsy comes into the possession of a superpowered suit formerly owned by Greer Grant (better known Tigra), she officially adopts the persona of Hellcat. In the following years, she becomes a stalwart member of both The Avengers as well as The Defenders, becomes close friends with She-Hulk, and even marries Daimon Hellstrom — the son of Satan himself. (Yes, really.)

Patsy (sometimes as Hellcat) has appeared in other media. She's most notably appeared in the Marvel Cinematic Universe as Trish Walker, portrayed by Rachael Taylor. This version is the secondary protagonist of Jessica Jones and is Jessica's best friend and adoptive sister. Trish borrows elements from both her mainstream and Ultimate incarnations, characterized as a former child star-turned-media personality. Outside of Jessica Jones, she later shows up in The Defenders, and a voiceover cameo in the first season of Luke Cage. It isn't until the end of Jessica Jones season 2 that Trish finally goes on her way to becoming Hellcat, when dosages of experimental drug gives her heightened (catlike) senses and improved strength.