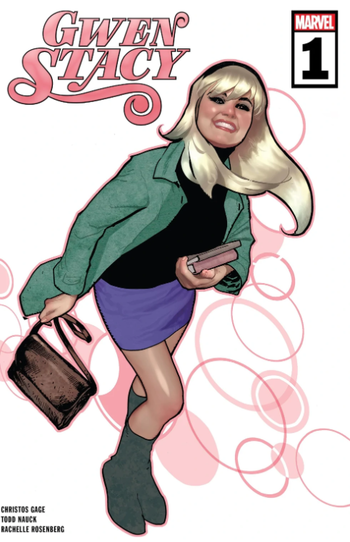 Gwen Stacy is a fictional Marvel Comics character created by Stan Lee and Steve Ditko. She is best known as one of Spider-Man's most prominent love interests, second only to Mary Jane Watson. First appearing in 1965 in Amazing Spider-Man #65, Gwen was introduced as one of Peter Parker's new college classmates along with Harry Osborn. A love square soon developed between the three of them and MJ, but over time, Peter and Harry exclusively dated Gwen and MJ respectively, which segues into the first of two things that Gwen is most famous for.

In Amazing Spider-Man #121, Gwen, who didn't know her boyfriend was Spider-Man, was kidnapped by his nemesis Green Goblin and taken to the Brooklyn Bridge. Spider-Man came to rescue her, and in the ensuing conflict Green Goblin knocked an unconscious Gwen off the bridge. Spidey desperately tried to snag her with his webs, and caught her before she hit the water... only for the whiplash to snap her spine, killing Gwen and leading to one of the most infamous panels in comic book history.

To this day, The Night Gwen Stacy Died remains one of the most shocking stories in all of comics, especially considering that at the time it was published (1973), the idea of permanently killing off a love interest was unheard of. Gwen's death shook the entire industry to its core, marking the definitive end to the innocence of The Silver Age of Comic Books and paving the way for darker, more experimental material.

It's worth noting that, astonishingly, Gwen has actually managed to remain dead since 1973, an astounding feat for a major comic book character. That's not to say she hasn't been around in any capacity. Just a few years after she died, a clone of Gwen, created by the Jackal (Gwen's Stalker with a Test Tube) and lacking any memory her death, appeared to shake things up. The clone was sent packing pretty quick, but this marked the first of several Gwen-clones to be created for lack of a true resurrection. The most notable of these was the one appearing in Dead No More: The Clone Conspiracy, which features a corporation headed by the Jackal that had figured out how to "resurrect" people by creating clones of them with all of their memories up to their deaths. Peter Parker was forced to confront a version of Gwen who remembered dying and also now knew he was Spider-Man. Neither of them got much time to angst, though, since the Gwen-clone and multiple others ended up dying at the end of the storyline.

Elsewhere, Gwen has popped up alive in multiple alternate universes, including the second thing she's most famous for: Spider-Gwen. First appearing in Edge of Spider-Verse #2, this character hails from Earth-65, and is a version of Gwen Stacy who was bitten by the radioactive spider instead of Peter Parker, her best friend who she later inadvertently causes the death of. The character gained instant popularity, spawning several ongoing series and becoming an instant mainstay in Spider-Man media outside the comics, making her television debut a mere two years after her creation, and her feature film debut just two years after that. The character would even start regularly fighting crime in Earth-616 (the main Marvel Universe), firmly establishing herself alongside Peter Parker and Miles Morales as the trifecta of Spider-Heroes.