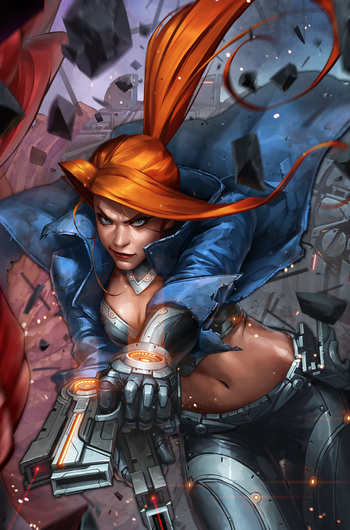 Oh yeah, you can already tell she's one of the badasses!

You. Spilled. My. Tea.
Advertisement:

Elsa is the daughter of Ulysses Bloodstone, an infamous monster hunter in the Marvel Universe, whose super strength and immortality were derived from the mystical Bloodgem embedded in his chest. Elsa's relationship with her father has been subject to continuity drift; while it was originally established that she never knew him prior to his death, later materials explicitly mention that he raised her to be a hunter like himself. Her nationality is also disputed; like Emma Frost, she's ostensibly from Boston, but more recent appearances suggest an English persona.

Nonetheless, Elsa's own path in life isn't dissimilar to her father's, becoming a prominent monster hunter in her adult years. At some point after Ulysses' death, Elsa came into the possession of a Bloodgem choker, effectively granting her the same powers as his —- but since her Bloodgem is worn externally, she's more susceptible to danger than he ever was.

Though Elsa first appeared in her own limited series, she's perhaps best known for costarring in Warren Ellis' Nextwave: Agents of H.A.T.E. alongside Monica Rambeau, the former Captain Marvel.

This series portrayed Elsa with a sharp change in personality from her initial characterization, not to mention completely changing her look. Originally a long-haired blonde prone to skimpy, Indiana Jones-esque clothing, the Elsa of Nextwave sports a red, tomboyish ponytail and badass longcoat. It's worth noting that Nextwave's level of canonicity has wavered back and forth since being published, but this new direction (and visual appearance) for the character has stuck with successive creators.

Elsa is one of the 142 superheroes who signed the Superhuman Registration Act, also becoming part of The Initiative in its wake. Outside of starring in a Legion of Monsters limited series opposite Morbius The Living Vampire some years later, Elsa fell a bit Out of Focus after the Civil War ended.

The Marvel NOW! initiative brought Elsa back into some consciousness, joining the likes of Valkyrie, Misty Knight, and Dani Moonstar in the Fearless Defenders, which only lasted for a total of twelve issues before low sales resulted in its cancelation.

Elsa also appeared in the pages of Avengers Arena, where her younger brother Cullen starred as a primary character. In the time Elsa spent away from visibility, she became an instructor at the Braddock Academy, where she enrolled Cullen as a student ... who'd just returned from a hell dimension where an eldritch abomination bonded with his soul. Because of this, she gave him a Bloodgem ring that he must wear at all times, or else he'll transform into the gigantic monster that possesses him.

During the AXIS story, Elsa joined an unlikely team of Avengers formed by Valeria Richards and an inverted Doctor Doom. Shortly after her stint there, Earth-616 collided with Earth-1610, thusly ending the Marvel Universe.

Now living on Battleworld without any memories of her previous life, Elsa guarded The Wall, separating Battleworld from the zombie-infested Deadlands. As part of the Secret Wars event, Elsa headlines a Marvel Zombies limited series, following her efforts to protect an orphan —revealed to be a younger version of herself— who wanders into aforementioned Deadlands.

After the Marvel Universe was restored, Elsa joined A-Force —the all-female team of Avengers— during the second Civil War, and showed up in the pages of Monsters Unleashed.