Characters / Marvel Comics: Daughters of the Dragon
aka: Misty Knight 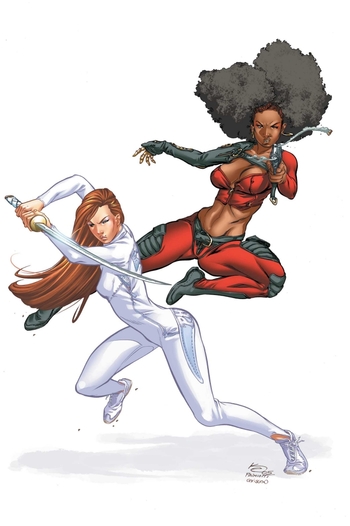 The Daughters of the Dragon is the name of a two woman team with Colleen Wing and Misty Knight because they are both expert martial artists.

After Misty Knight and Colleen Wing became friends, the two created a private investigator firmnamed Knightwing Restorations, Ltd. The two were dubbed "The Daughters of the Dragon" due to their abilities of martial arts.

Misty and Colleen both appear in the Marvel Cinematic Universe, portrayed there by Simone Missick and Jessica Henwick, respectively. Introduced separately (Misty in Luke Cage (2016) and Colleen in Iron Fist (2017)), the two finally meet in The Defenders (2017), and become friends during the events of that series. While the Daughters of the Dragon are not officially formed, Misty has been confirmed to be appearing in Iron Fist season two, suggesting further developments between them. 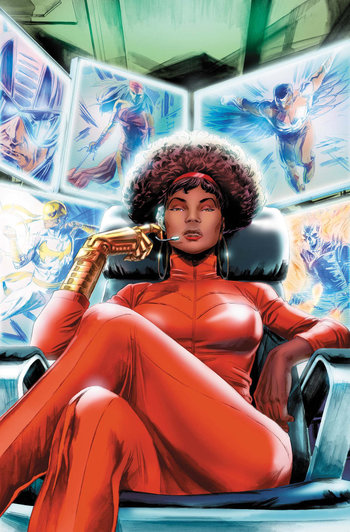 "Hello, hero. This is Control. Are you for hire tonight?"

Created in response to the blaxploitation craze of The '70s, Mercedes Kelly "Misty" Knight was an average police officer in the New York City Police Department until she was injured in the line of duty, losing her right arm while attempting to stop a bombing. Upon recovery (and resigning from the force in lieu of taking a desk job), she was given a bionic replacement arm by Tony Stark and became the roommate of Jean Grey during the latter's stint away from the X-Men.

Not taking her retirement lightly, Misty soon formed the Daughters of the Dragon private detective agency with her best friend Colleen Wing. During this time, she also made the acquaintance of Luke Cage and Iron Fist — the latter of which she'd begin an on-off relationship with over the next few decades.

After many years of relative obscurity, Misty saw a resurgence in popularity during the mid-oughts, thanks to her increased involvement with the street-level side of the Marvel Universe. She appeared in the second and third volumes of Heroes for Hire, co-starred in Immortal Iron Fist, and co-headlined a six-issue Daughters of The Dragon limited series with Colleen, among other things.

The Marvel NOW! and All-New, All-Different Marvel eras of the The New '10s continued Misty's visibility streak, having her join the Fearless Defenders alongside Dani Moonstar and Valkyrie. It was during this time that she also began a working (and little-less-than-professional) relationship with Sam Wilson, the all-new Captain America.

Outside of comics, Misty has appeared in various other forms of media. She's a playable character in the video games Marvel Future Fight and Marvel: Avengers Alliance, and appears in an episode of The Super Hero Squad Show. In 2016, she made her live-action debut in Luke Cage (2016), portrayed by Simone Missick. 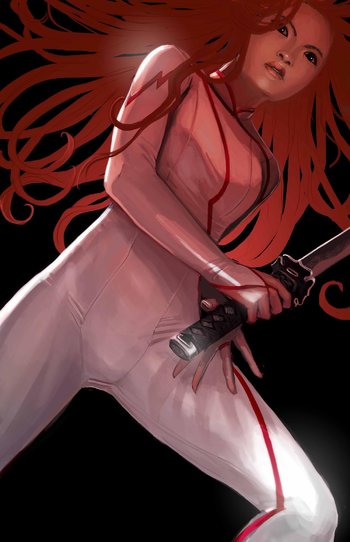 Colleen Wing is a character from Marvel Comics, created by Doug Moench and Larry Hama.

A well skilled ninja, Colleen Wing has frequently been the partner of Misty Knight. They worked together as the Daughters of the Dragon, a created a new team of Heroes for Hire during the Civil War. During Shadowland she left Misty and started her own group, the Daughters of the Shadow.

She is portrayed by Jessica Henwick in the Marvel Cinematic Universe, first appearing in Iron Fist and later The Defenders.