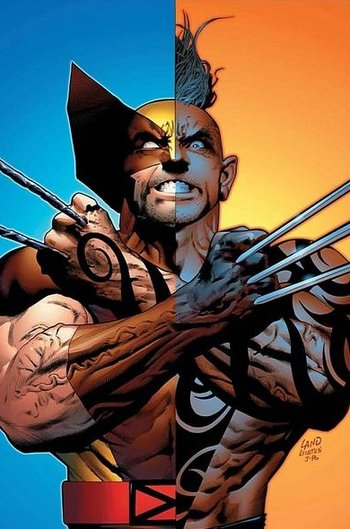 "I never knew my father. I was raised... to be someone different than him. And now I'm supposed to be him. I never asked for that, but when the opportunity found me... I was curious. I wanted to know what it was like. To have people look at me and see... my father."
Advertisement:

Daken featured in Rick Remender's Uncanny X-Force and Uncanny Avengers. He also was one of five characters focused on in The Logan Legacy, a seven-issue miniseries that explored the aftermath of the death of Wolverine, which starred in the weekly ongoing Wolverines.

With the rise of the mutant nation of Krakoa, Daken was one of many villainous mutants offered sanctuary on the island. Seeking to set his past behind him, Daken sought a better relationship with his father and eventually joined the newest iteration of X-Factor, putting his enhanced senses to use in investigating the deaths of mutants to enter them into the resurrection queue.