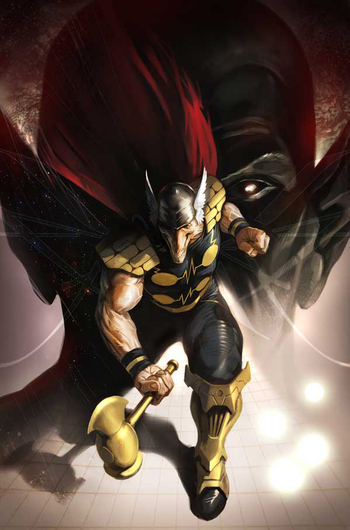 "Harm a friend and comrade of mine, and suffer the consequences! So swears Beta Ray Bill!"

"I am oath-brother to Thor, the God of Thunder! I carry Stormbreaker, a weapon of great power, blessed by Odin, the All-Father!"
— Beta Ray Bill

With the decimation of the Burning Galaxy at the hands of Surtur, the Korbinite race was on the brink of extinction. Once a mighty empire inhabiting several planets, the surviving Korbinites were reduced to a fleet of ten thousand starships. Realizing that they needed a champion to protect the fleet during their search for a new home, the Korbinites selected the strongest among them, Bill, after their original champion, Alpha Ray, proved to be dangerously uncontrollable. Having bested his fellow Korbinites in combat to prove his worthiness, Bill's soul is transferred into a "bio-machine" based on the most ferocious carnivore in the Burning Galaxy. Now called Beta Ray Billnote Fun fact: in Real Life, beta rays are electrons emitted through radioactive decay, the champion and his sentient ship, Skuttlebutt, successfully delay Surtur's remaining demons while the fleet makes its way to safety. With the fleet light-years away, Bill attempts to flee but the demons give chase, threatening to overtake the Korbinites within days. Taking Skuttlebutt ahead of the fleet to find sanctuary, Bill enters stasis while the ship replenishes its energy reserves by absorbing a star. This act is picked up by a S.H.I.E.L.D. deep-space satellite, prompting Director Nick Fury to take drastic measures.

Detecting the ship's path, which will carry it through the Milky Way galaxy, Nick Fury kidnaps Dr. Donald Blake and "asks" his alter ego, Thor, to investigate. Using his great speed, Thor intercepts Skuttlebutt en route to Earth. Detecting a similarity between Asgardian magic and that used by the demons pursing the Korbinites, Skuttlebutt attacks but is unable to defeat Thor before he pierces the ship's hull and makes his way inside. With no alternative, Skuttlebutt wakes Bill from stasis and the two champions start slugging it out. Losing possession of Mjölnir for more than 60 seconds during the fight, Thor is transformed into his mortal identity of Dr. Donald Blake and is knocked unconscious by Bill. Picking up Dr. Blake's cane, which is really Mjölnir in disguise, Bill is recognized as worthy and gains Thor's powers and a similar costume after striking the cane against the wall. Heavily damaged by Thor, Skuttlebutt crash lands on Earth, where S.H.I.E.L.D. agents lie in wait. Using his new powers to defeat the agents with ease, Bill realizes that a weapon like Mjölnir could save his people from certain death. Before he can leave, however, Bill is unexpectedly whisked away to Asgard.

Finding himself in a strange place, Bill quickly takes down the gathered Asgardians before coming face-to-face with Odin. Angered, Bill throws the hammer at Odin only to watch it float harmlessly into the All-Father's hand. Locked in a cage of pure force, Bill and Odin speak about the implications of Thor's defeat aboard Skuttlebutt. Teleporting the helpless Dr. Blake to Asgard, where he is mystically transformed into Thor, Odin releases Bill and the three men depart for the mountains to discuss their situation. Never before encountering a non-Asgardian who can wield Mjölnir, Odin acknowledges Bill's claim to the hammer and arranges a battle to the death between the two worthies. The prize: Mjölnir. Battling for hours in the fiery realm of Skartheim, Bill and Thor demolish the countryside with their blows before collapsing from sheer exhaustion. As their bodies rest above a lava flow, Bill revives first, his bio-machine body rejuvenated by the intense heat. Recognizing Thor as a worthy opponent, Bill prevents Thor from falling into the lava flow, reaffirming his own worthiness in the process. Recognizing Bill as the winner, Odin teleports the two broken, exhausted warriors home to Asgard. Days pass while Odin's healers work their magic, during which the All-Father speaks with Bill about his victory over Thor. Citing the hammer's mystical bond with Thor, Bill is hesitant to take Mjölnir for his own despite his great need, so Odin strikes a deal with the Eitri of Nidavellir to forge another hammer of equal power: Stormbreaker.

Now fully-healed, Bill leaves Asgard along with Thor and Lady Sif, hoping to track down the Korbinite fleet before it is too late. The great speed of Toothgnasher and Toothgrinder allows the heroes to catch the fleet with ease, but the demon attack has already begun. In order to defeat the demons, the source of their power must be destroyed. Lady Sif volunteers to stay behind to defend the fleet while Bill and Thor travel to the heart of the Burning Galaxy. Traveling faster than the eye could follow, Bill and Thor arrive in a twisted, demonic perversion of the former Korbinite galaxy. Encountering a barrier around the galaxy's center protected by intense heat, Bill slips through while Thor lies in wait. Discovering a portal projecting massive amounts of energy, Bill and Thor strike simultaneously, destroying the portal with the combined might of their hammers.

Back with the fleet, an exhausted Sif cuts down hundreds of demons, but their numbers only grow until the unexpected arrival of Skuttlebutt turns the tide. Working together, Sif and Skuttlebutt drive the demons back, but time is running out. Desperate, Skuttlebutt readies her Self-Destruct Mechanism, which can wipe out all life within a light-year. Unwilling to abandon her fellow warrior, Sif watches as the demons suddenly fade away.