The main cast of Slayers. Any help in sorting these out would be greatly appreciated.

To the secondary character page
To the main page 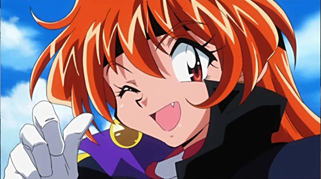 Voiced by: Megumi Hayashibara (Japanese), Lisa Ortiz (English; series), Cynthia Martinez (English; movies), Jhaidy Barboza (Latin American Spanish), Marta Sáinz (European Spanish)
"You made two mistakes: you killed a lot of people to achieve your goals; and you picked a fight with ME."

Our beloved Anti-Hero, Lina is a young Black Magician Girl from the land of Zephilia. She is known throughout the world as the "Queen of Destruction", "Dragon Spooker" (because she can apparently frighten dragons to the point that they side step her "out of sheer revulsion" - which actually does happen in the pilot) and "Enemy of All Living Things" due to her short temper and skill with Dragon Slaves. Lina usually pursues power and riches for herself, but gets dragged into saving the world along the way. 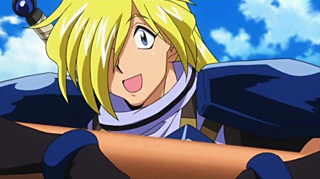 An archetypal example of the Idiot Hero, Gourry is Lina's jellyfish-brained traveling companion. A descendant of the legendary Swordsman of Light, he wields the ancestral weapon. Gourry may have poor memory, but he is an excellent swordsman, and a match against even the powerful demons of the Slayers world. Gourry met Lina by accident, after a somewhat confusing first meeting, and decided to just hang around with her afterwards because he had no place else to go. Lina would never admit it, but she enjoys having him along. 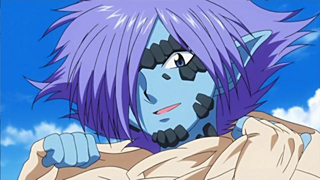 From a young age, Zelgadis was apprenticed to his grandfather Rezo, eagerly assisting the Red Priest in pursuit of his many goals with a young man's zeal to aid a relative he idolized. Zel asked Rezo for power, in order to help seek out the Philosopher's Stone, and Rezo gave him power, alright: he transformed Zelgadis into a chimera, sorcerously fusing him with a stone golem and a low-level monster called a brau demon to become a mystically powerful, hyper-strong stone-skinned monster. After following him for several years as a loyal servant, Zel ran into Lina, performed a Heel–Face Turn and has been trying to restore his human body ever since. He has the least interest in Lina's little group (to the point he eventually wandered away and was never seen again in the original novels), and usually tends to accidentally cross paths with them whilst searching for cures, often needing to be bribed into tagging along by appealing to his desire to be rendered human again. 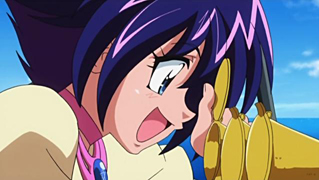 A young princess (younger by a few years in the anime than the novels, actually) who initially mistakes Lina as a champion of justice! and begins traveling with her out of a desire to do good. Lina finds her annoying but puts up with her because having a member of the Saillune (Seyruun in the English version) royal family around is handy when the restaurant bill comes due. Amelia, for her part, admires Lina's strength of character, courage, and free lifestyle, and seems to almost regard her as a self-adopted big sister.

Starting in Slayers NEXT 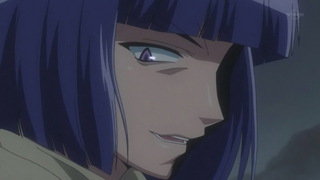 Created over a thousand years ago during the Dark Lord's Resurrection War (or "War of the Monsters' Fall" if you go with the anime translation), Xellos is the loyal servant of the Greater Beast Zelas Metallium. He is twice as powerful as any of the other Priests or Generals due to the fact that he was created without a General counterpart, and one of the most powerful demons in the world overall. He loves deception and his true motivation is often impossible to determine, though he's usually following some mysterious plan on behalf of his master. Note that he gave himself the title of 'Trickster Priest'; that should give you ample warning as to what kind of person he is. 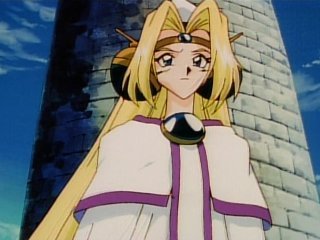 A high-strung member of the Golden Dragon race, she replaces Sylphiel in TRY, acting as a guide for the party in the Golden Dragons' quest to stop Dark Star Dugradigdu. As a member of a race siding with Ciefeed, the god of the Slayers World, she comes to blows with Xellos frequently, often for comedic relief. 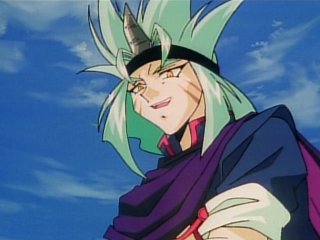 The main antagonist of TRY. Originally an Ancient Dragon named Val, Valgaav witnessed and survived a holocaust against his own kind from the Golden Dragons. This left him a bitter and hopeless man, but his life changed when he met the Mazoku Lord Gaav; finding him suitable for his goals, Gaav gave Val a portion of his power, making him a being with dragon and Monster abilities. His anger comes to a head after Gaav's death. 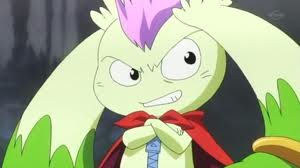 Prince of Taforashia, currently searching for a cure to the Durum sickness that basically wiped out his father's kingdom. 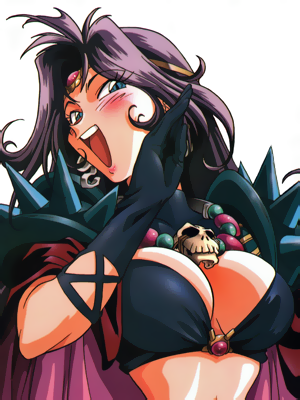 A flaky, sometimes obnoxious, drunkard, scantily clad sorceress, Naga was Lina Inverse's first travelling partner, with whom Lina gladly parted ways before she eventually met up with Gourry Gabriev. After her Missing Mom was murdered by an assassin, Naga became a vagabound wandering the world and learning Black Magic. She soon declared herself Lina's rival and began following her around.