Team Colors : Pink and White
Formation : 4-4-1-1note with one attacking and one defensive midfielder, and two "wingers" instead of a flat set of 4 midfielders, a "false nine", and a "target man"

Usually shortened as Kijikita, Kijiyama North High School is a former all-boys school which has turned co-ed three years before the start of the series, and is one of the best sporting high schools for boys in Japan. They regularly qualify for the national tournaments in baseball, kendo, and football every year. Unfortunately, there are only a few sports clubs for girls in Kijikita, and the already existing ones often struggle in tournaments even if they get enough members to participate.

Despite the above situation, a girls' football club has recently been created by Reika Hakurai, the most popular freshman girl in school, to catch the attention of Kijikita's super rookie Kunimitsu Hasuga, whom she has a crush on. As such, the team mostly consists of Reika's Girl Posse - a ragtag bunch of exactly eleven high school freshmen. Reika later recruits Kunimitsu as their coach in order for them to participate in Tournament Play. She then later recruits English teacher Chako Kawami and Konori Shindou, Mai's classmate, as assistant coaches, despite both of them knowing next to nothing about football at all.

Inspired by Kunimitsu's love of Italian football and pressed for time to quickly build a winning team, Kijikita uses a 4-4-1-1 variant of the 4-4-2 formation popularized in Italy during The '80s and The '90s, with Mitsu and Yoko as the attacking and defensive midfielders, respectively, and Kiiro and Chidori as the "wingers" instead of a flat set of 4 midfielders as usual with 4-4-2, Reika as a "false nine"note a deep-lying center forward who can easily switch between forward and midfield positions, and Mai as the "target man"note a center forward assigned so close to the goal that the team's main objective would be to get the ball to her as quickly as possible. This reduces the amount of strategy needed for a ragtag team to stand a chance against more organized clubs, as this formation allows them to switch between offense and defense in quick succession. 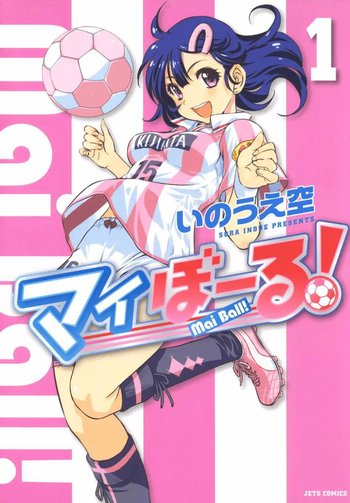 The main female protagonist in the series, Mai lives with her sister, mother, and father. Her family owns and manages a bath house, and is in the same class as her best friend Konori. She is a childhood friend of Kunimitsu and has helped him train for football for many years. This has also benefited her, as she subconsciously improved her own skills despite never having competed in an official football match prior to joining the Kijikita Girls FC.

She has a case of the nerves so bad that at first it can only be calmed by Kunimitsu kissing him, which he calls "conjuring a charm". She can be quite intense while playing football, but she often daydreams and can be very perverted under this state. As Mai slowly gains confidence in herself, she has risen to become one of the pillars of strength for Kijikita. 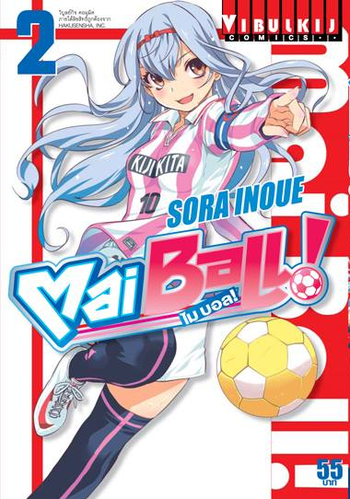 The other main female protagonist of the story and the founder and team captain of the Kijikita Girls FC. Reika is the perfect high school girl: beautiful, popular, athletic, has good grades, and is from an upper class family. Her primary motivation for entering Kijikita is to get close to Kunimitsu whom she has a crush on.

She first applied to become the manager of the boys FC, but was rejected by their coach. She instead created the girls' football team so Kunimitsu can see her play. Despite playing the sport for only two months she rose up to become the pillar of strength for Kijikita and a rising star capable of going toe-to-toe against the best players in the region with much more football experience than her. 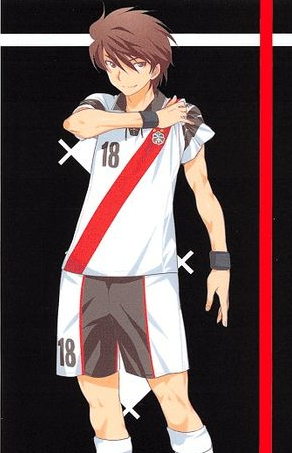 The main male protagonist of the series, Kunimitsu is a two-time MVP in the under-15 national tournaments, the super rookie of the powerhouse Kijiyama North Boys FC, and head coach of the girls club. He and Mai are childhood friends and next-door neighbors, training with each other in the local park for many years to improve at football.

Generally calm, quiet, and not overly reactive or emotional following new developments, he keeps cool and puts faith in his players. However, unlike many Harem Genre protagonists, he does not hesitate to call out his girls whenever they get too rowdy or perform badly.

His love for Italian football and the need to quickly build a winning team out of a ragtag bunch of players inspired him to implement a 4-4-1-1 variant of the 4-4-2 formation popularized in Italy in The '80s and The '90s for the Kijikita Girls FC.

An English teacher in Kijikita who serves as one of the coaches of its girls football team. Despite this, her role seems to be more of a manager than a coach, as she often leaves the strategy to Kunimitsu and would rather care for the team's needs outside the pitch.

Mai's best friend, she and Mai hang out together both at and outside school, often eating lunch together. Mai always relies on her to help her through exam season. After seeing her well-presented lesson notes, Reika woos Konori into joining her team to be another coach. Despite knowing nothing about football at all, she is often the best at viewing the team calmly and objectively.

Aside from being an excellent student, she is generally very calm and has a good understanding of what the other girls in the team are thinking. She seems to have a strange side whenever she meets Midori Inukai.

Previously played for Kijisan Middle School. During this time, she played against Mitsu's middle school, where Mitsu began to admire Kiiro's ability after Kijisan easily won. A long time friend of Mai, her family runs a kimono business, the Inukai-ya. Has a younger sister named Midori.

Reika's cousin and the Token Mini-Moe of the team. Chidori has played football since she was four years old and lived in the Netherlands between seventh and ninth grade, where she also worked on her footballing skills. She is initially anti-social, however, she begins to talk more to her teammates the more she plays with them. Normally quiet and reserved, she can be talkative and bubbly around her friends.

Chidori occassionally goes into "stealth mode", a coping mechanism she had when having difficulties fitting in while in the Netherlands, as she thought it was easier for her to just disappear. This increases her football abilities at the cost of making her more sinister and unable to talk to her friends.

Played football for Hamami Middle School and went up against Mitsu at this level. Although Mitsu has always considered her to be an idiot, she admires her passing technique. Given her past experience in the position, Kunimitsu picks her as the team's defensive midfielder despite her stamina problems. She is an only child. She has a very happy-go-lucky attitude to life, however can get serious when in a severe enough situation.

One of the most talented players in Kijikita who openly boasts about her abilities. She has played football for a long time, including during middle school where she faced Kiiro and Yoko. She hates defending, which annoys her teammates greatly. Lives with her younger brother.

A Kijikita freshman who plays goalkeeper for the girls' football team. She was designated as the goalkeeper because she is the only candidate to not give up during Reika's trial. She always sings Ball, I Love You in the karaoke and knows it by heart. Naturally, it's the only song she gets a score of 100% on every single time. 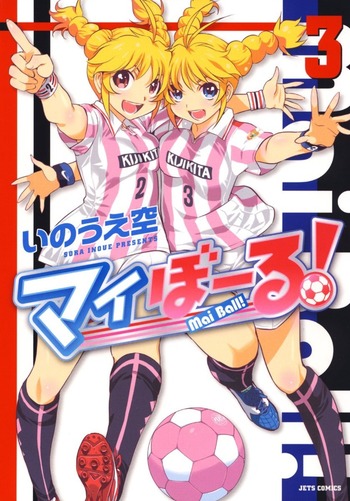 Twins who play full backs for the Kijikita Girls FC. They love to compete against each other. Like Rinka, they have only one song they sing in the karaoke that they get the same score each time.

The team nurse who also plays right center back. Her "muscle-reading" ability makes use of her knowledge of the human anatomy to read and track her opponents' movements.

Although Saki has never played football before, she has previously played basketball, so she is naturally sporty and has a good leap. Kunimitsu picks her as the team's left centre back given her height, although she also trains as a keeper to cover for Rinka if ever she becomes unavailable.