A country situated in the Northern lands that is part of the Seven Seas Alliance and is currently ruled by Chief Rametoto. During ancient times it was notorious for its pirates and sea raiders. The Imuchakk tribe has a confederation of five clans; each with their own laws, who function as a country and maintain autonomy and non-aggression pacts with each other. The National Chief is the head of state, who coordinates with the five chiefs that rule their respective clans and the Patriarchs who are heads of the villages. 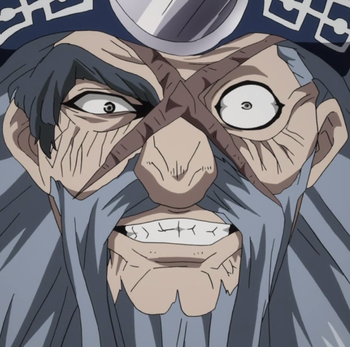 The National Chief of Imuchakk. At some point in his life, Rametoto conquered the 30th Dungeon and obtained his Djinn, Forneus. 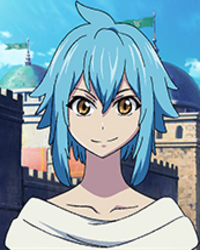 The daughter of one of the Patriarchs and the younger sister of Hinahoho. 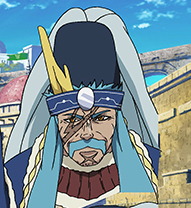 Hinahoho and Pipirika's father and the chief of their village.

The woman who Hinahoho has always loved, she is the daughter of Rametoto.

Voiced by: Ayumi Tsunematsu (Japanese), Wendee Lee (English)
Imisisika
He is the ambassador of Imuchakk who appears briefly along with Sinbad, Parsine and Narmes. His name was only revealed in the Magi Official Guidebook.

Sasan is a small and landlocked country surrounded by mountains on all sides and part of the Seven Seas Alliance. It is also a religious country ruled by the "Knight King", Darius Leoxses. The country produced a vast natural resources of iron, gold, silver and other metals from the surrounding mountains. Given its difficult terrain, the country itself can only be reach by foot. Having a religiously devoted culture, the country is often called the "Land of Purity".

Darius Leoxses
Darius is the "Knight-King" of Sasan. He is the owner of the Djinn Alloces. He is the father of Mystras and Spartos.
Voiced by: Kenyuu Horiuchi (Japanese), Jalen K. Cassell (English)
Mystras Leoxses
Mystras Leoxses is the oldest son of Darius Leoxses. He is a candidate for the next Knight-King of Sasan. In Advntures of Sinbad, he, instead of Spartos, was one of Sin's travelling companions.
Voiced by: Wataru Hatano (Japanese), Robbie Daymond (English)

Artemyra is a small matriarchal country and part of the Seven Seas Alliance. It's located in the middle of the Unexplored Region or in southeastern area of the continent. Populated mostly by warrior women, they have a special bond with animals (particularly, giant birds) and reside in the sky, which is why it is called the "City of the Sky". The common appearance of the women of Artemyra is blonde hair and pink eyes.

Mira Dianus Artemina
Mira is the Queen of Artemyra and the owner of the Djinn Cerberus. She is also Pisti's mother.
Voiced by: Yumi Touma (Japanese), Michelle Ruff (English)
Parsine Pratemia
Parsine is the ambassadress of Artemyra, she appears briefly along with Sinbad, Imisisika and Narmes. She gets mad when someone talks about her age. Her name was only revealed in the Magi Official Guidebook.
Voiced by: Minami Tsuda

The Heliohapt Kingdom is a small country situated in the north of the Dark Continent, ruled by King Armakan Amun-Ra. The natives from Heliohapt have dark skin, white hair and green eyes, the women don't feel embarrassed about exposing their chests, only their navels. It is the homeland of Sharrkan and Sphintus Carmen.

Armakan Amun-Ra
King of Heliohapt and the owner of the Djinn Vassago. He is Sharrkan's older brother.
Voiced by: Hidenobu Kiuchi
Narmes Titi

Narmes is the ambassador of Heliohapt, he appears briefly along with Sinbad, Imisisika and Parsine. His name was only revealed in the Magi Official Guidebook.

The Kina Kingdom is an infamous, small island located further east of the Kou Empire. Since ancient times, Kina paid tributes to the three great countries of the Far East: Kou, Gou and Kai. It stopped any diplomatic relations with other countries once the King of Kina took over. As the Kina Kingdom is very small, it was able to erase itself from the surface of the sea with the special power they obtained.

Takeruhiko is the King of the Kina Kingdom.