The Kou Empire (煌帝国 Kō Teikoku) is a large military nation, considered one of the most powerful in the current era because of the number of Dungeon Capturers and armies that it controls. The empire is also described as very aggressive, using any reason to attack another nation.

open/close all folders
General
The ruling family of the Kou Empire. Thus far there have been only two Emperors: Hakutoku, who was murdered in a revolt and was later succeeded by his younger brother Koutoku. Gyokuen, who was married to Hakutoku, ended up marrying her brother-in-law after becoming a widow. She becomes the Third Emperor after taking power from her stepson and the true heir, Ren Kouen, and eventually is killed by her own son, Hakuryuu, who becomes the Fourth Emperor. After he abdicated the throne Kougyoku becomes the fifth Emperor..
Ren Kouen 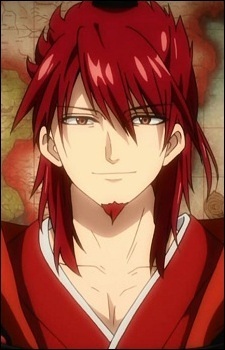 First Imperial Prince of the Kou Empire, and exalted Supreme General of the Western Subjugation Army. He is the owner of three metal vessels, the Djinns Agares, Astaroth and Phenex, and is thus far the only person other than Sinbad to have conquered more than one dungeon. He is one of Judar's King Vessels. 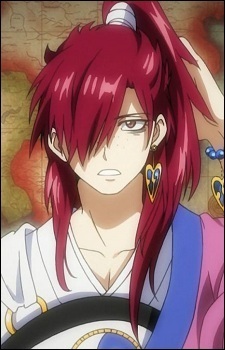 Second Imperial Prince of the Kou Empire, his older brother Kouen's personal advisor. He is a General of the Kou Empire's Western Subjugation Army. Koumei is the owner of the Djinn Dantalion and one of Judar's King Vessels. 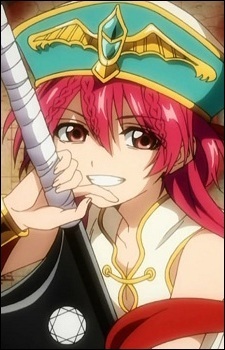 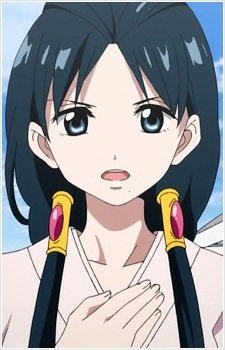 First Imperial Princess of the Kou Empire. She is a Dungeon Conqueror, having obtained the Djinn Paimon, and the general of the Northern Station Corps. Hakuei is a kind and wise King Candidate and one of Judar's King Vessels. 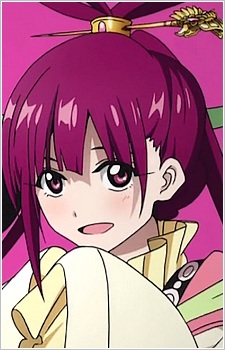 Eighth Imperial Princess of the Kou Empire. As the youngest she doesn't hold much political power, and though she would rather live her life as a warrior, she will more likely get into an arranged marriage to benefit the Empire. She is the owner of the Djinn Vinea and one of Judar's King Vessels. She later becomes the fifth Empress of the Kou Empire. 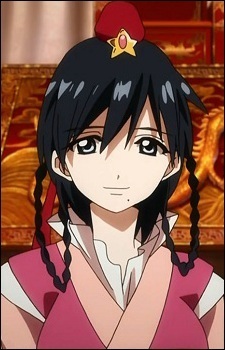 The mother of Hakuryuu and Hakuei, and stepmother of Kouen, Kouha, Koumei and Kougyoku. She was married to Hakutoku, but after he and their eldest sons were killed, she ended up marrying his younger brother Koutoku. After Koutoku passed away she usurped the throne, making her the current ruler of the Kou Empire. She acts as the leader of Al-Thamen.

Voiced by: Miki Ito (Japanese), Erica Lindbeck (English)
Ren Hakutoku
Hakutoku was Kou's First Emperor and the first husband of Gyokuen, father of Hakuyuu, Hakuren, Hakuei and Hakuryuu. He and his two oldest sons, Hakuyuu and Hakuren, were killed during a revolt, ten years before the start of the story, orchestrated by remnants of Kou's defeated enemies.

Ren Koutoku
The younger brother of Hakutoku, who after his death inherited his position as the next Emperor and married his widow, Gyokuen. He had several children with different women.
Ren Hakuyuu and Ren Hakuren 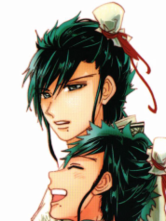 Hakutoku and Gyokuen's oldest children, Hakuyuu was the former Crown Prince and Hakuren worked as his advisor. They were killed along their father during a revolt, ten years before the start of the story, orchestrated by remnants of Kou's defeated enemies. The truth is that the revolt was originated by Al-Thamen, meaning that they were killed by their own mother.

Seiryuu is the Right General of the Kou Empire. He is first introduced as part of Kouen's army.

Kokuhyou is the Left General of the Kou Empire. He is first introduced as part of Kouen's army.

Seishuu is one of Kouen's Household Members of his Djinn Astaroth. He is very tall and his hair is made of snakes. He and Seishun, Hakuei's attendant, are brothers.
Voiced by: Hiromu Miyazaki

Gaku is part of Kouen's Household Members of his Djinn Phenex. Gaku has the appearance of a huge and robust man. He has a pig nose, a round face, and a bushy moustache.
Voiced by: Takehiro Hasu

Kokuton is part of Kouen's Household Members of his Djinn Agares. Kokuton has a bull-like appearance; lion-like hair, a tail and his entire body is covered in fur.
Voiced by: Sota Arai

Shou is part of Kouen's Household Members. Shou has a dragon-like appearance, and has a tail, scales all over his body and sharp teeth.
Voiced by: Shintarou Oohata
Chuu'un

Chuu'un is the assistant of Koumei Ren and a member of his household.
Kouha's Retainers

Three witches who are completely loyal to Prince Kouha. Along with Meihou, they are his principal aides.
Voiced by: Aki Nagao (Junjun), Yui Shoji (Reirei), Sakiko Kawai (Jinjin) (Japanese)

He is a soldier of the Kou Empire's Western Subjugation Army under Kouha Ren. His ancestors were supporters of a failed revolt, they were exiled for it and lived all this time in the wilderness. At some point Kouha came and invited him and the rest of his clan to join his army.
Ri Seishun 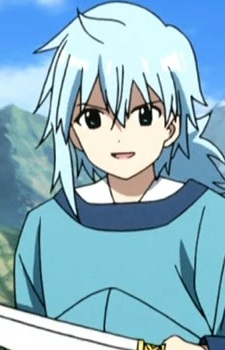 Ren Hakuei's attendant and one of her household vessel users. Hakuei considers him as one of her "old friends" and they have a close relationship. He and Seishuu, a member of Kouen's Household, are brothers. 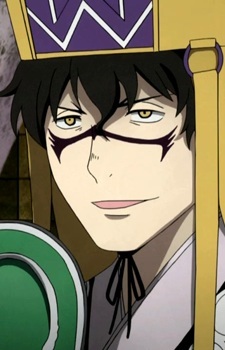 Ren Kougyoku's attendant and also part of her household.