The relatives, spouses, and children of the main cast of Mad Men. Beware of spoilers.

Don and Betty's sons. Much more in the background than Sally. 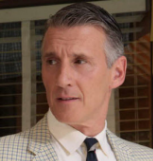 An acquaintance of Roger Sterling's, Henry is a Republican political operative in New York State first for Governor Nelson Rockefeller, then for New York Mayor John Lindsay,note Both Rockefeller and Lindsay were noted liberal Republicans, and Francis is no different whom Betty meets at a party. After her marriage to Don starts to founder, she begins an affair with him and eventually divorces Don to marry him. He himself is already divorced, with a daughter. He is eventually elected to the New York State Senate from a safe GOP seat in Westchester County.

Roger Sterling's first wife, who he divorces and leaves for Jane, a secretary at SCDP.

Roger and Mona Sterling's only daughter. She is married and has one child. She later leaves her husband and son to live in a Hippie commune and changes her name to "Marigold". 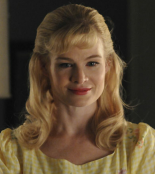 The wife of the real Don Draper, who lives in California. Through flashbacks, we find out that she tracked "Don" down after he came back from the war and demanded an explanation, but was very forgiving when she got one. She and this Don never had a romantic relationship; instead she was, as they both said at different times, the only person who knew all about him. She dies of cancer in season four.

Pete Campbell's wife, from a Nouveau Riche family. They had a rocky start, but have grown into one of the most stable and loving couples on the show for a brief period of time.

Megan's French-Canadian parents, whose marriage is decaying from the inside out.

Joan's fiancé and then husband, a doctor. In the first episode in which he is featured (he is seen before briefly), he rapes her on the floor of Don's office, which she keeps a secret and hasn't mentioned since. He fails to get his residency when they planned, then joins the Army instead. In Season Five, he and Joan have a huge fight and he files for divorce.