Mother of Ranka Lee and Brera Stern. Assistant to Mao Nome as she studied the Vajra.

Appears only in the Macross FB7 crossover movie. Is actually the Protodeviln Gavil who has somehow gone to the Frontier fleet. He's dropping old VHS tapes containing recorded footage from the Protodeviln War, leaving them in the hands of Ozma and the rest of the SMS crew.

At first, Ozma thinks that this may be a warning of an impending Protodeviln invasion, but it turns out that Gavil simply wants the truth behind the war and the fate of the 7th Fleet to be known. 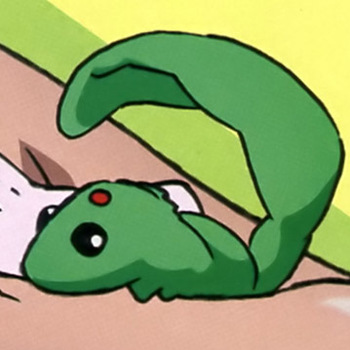 A small green animal that Ranka adopts early in the series and keeps as a pet. Mostly just there to be cute, but there's more to the little guy than is immediately apparent...