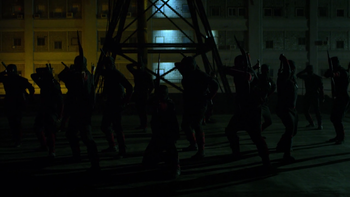 "Free from the fear of death, these pieces of shit step up, kill their master, take over, and paint the shores of the Far East with the blood of anybody who stands in their way. They grow in size, power, wealth, spread across Asia, and finally give themselves a name. Yami no te. It means, 'The Hand'."
— Stick

A mysterious organization based in Asia; initially believed to be Yakuza, they are eventually revealed to be something much worse. In Daredevil Season 1, through their agent Nobu Yoshioka, the Hand are helping Wilson Fisk secure control over the New York underworld in exchange for control of a specific block in Hell's Kitchen, as part of something they call "the Rising".