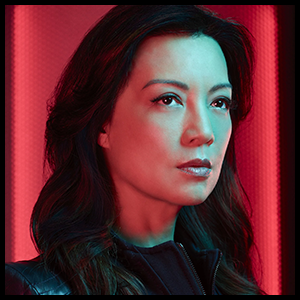 "People believe what they need to believe to justify their actions."
Advertisement:

"May used to be different. She wasn't always quiet, she was just... she was warm. Fearless in a different way. Getting in trouble, pulling pranks, thought rules were meant to be broken. Sound familiar? But when she walked out of that building, it was like that part of her was gone. I tried to comfort her, but she wouldn't tell me what went down in there."
— Phil Coulson

A highly experienced agent of S.H.I.E.L.D. who is an Ace Pilot and weapons expert. She is a member of Agent Coulson's team that is assembled to investigate strange events around the world and easily one of the strongest characters in the series. With Coulson now Director of S.H.I.E.L.D., May functions as his Number Two in the fight against HYDRA.

An android duplicate of Agent Melinda May, created to infiltrate the team and assist in stealing the Darkhold.

The version of Melinda May created in the Framework.

A variant of Melinda May from a destroyed Earth.