This page is for characters introduced in the Lupin III: The Italian Adventure. Tropes for the franchise' main characters can be found the character page for the entire franchise. 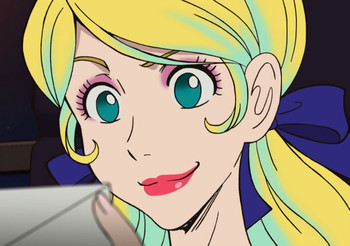 Heir of the Rossellini family of San Marino. Model, athlete, actress, thrill seeker, and CEO of the Italy's largest hotel chain. Lupin gets married to her as a way to steal the Royal Crown of Liberty from San Marino. However, Rebecca has a secret - she's a master thief herself and is using Lupin as a distraction so that she herself can steal the crown. On top of that, she's still married to Lupin although the latter claims to now want a divorce.

An agent of MI6 that Lupin and Jigen run into during the course of the series. Aside from being a secret agent, Nyx also has super hearing that allows him to home in on his targets.

A clone of Leonardo da Vinci created by MI6. Has all the memories of historical counterpart.

Rebecca's faithful butler who follows her everywhere she goes, even assisting her in her heists.

A scientist and the deceased former boyfriend of Rebecca.