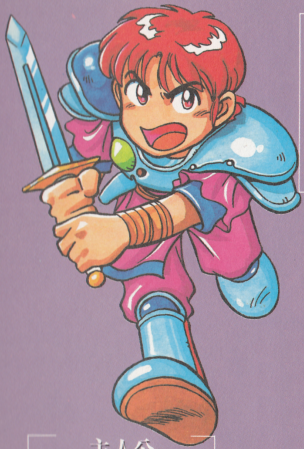 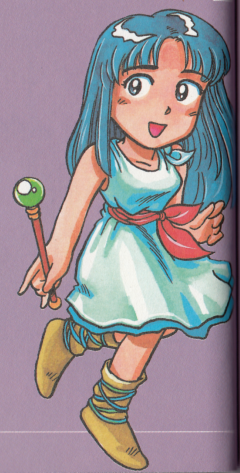 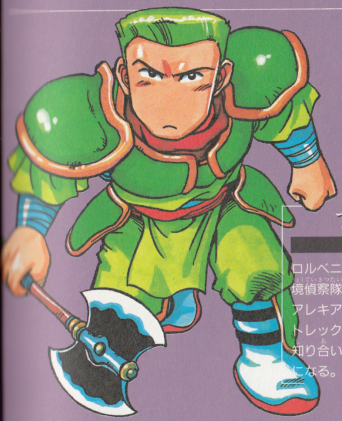 Voiced by: Yuuichi Nakamura (Japanese, DS Game)
"Leave it to me!"

The main character of the second game, he goes on an adventure that becomes part of the original game's history. He's one of the four heroes who battled on Doom Island.

Voiced by: Aki Toyosaki (Japanese, DS Game)
"My name... Tia, like tear. Because of this, I was always teased and I was always crying."

Maxim's childhood friend from Elcid. She runs a weapon shop, but decides to accompany Maxim on his adventure. She doesn't like Maxim's dangerous lifestyle. She's one of the characters who doesn't go to Doom Island in the original.

Voiced by: Kenta Miyake (Japanese, DS Game)
"Hey Maxim! Are you ready to have a little match?"

A warrior from Tanbel (or Parcelyte, depending on the game), he's engaged and has a sister, but finds himself fighting monsters more than spending time with his loved ones. That's when he meets Maxim and joins him on the quest. He's one of the four heroes who battled on Doom Island. The man lived for all the years between Rise of the Sinistrals and Fortress of Doom.

The commander of the Parcelyte army with magic capabilities. When Maxim's party shows up, she's ordered to team up with Maxim. Over time, she grows to love Maxim, and the two wed. She's one of the four heroes who battled on Doom Island.

Voiced by: Daisuke Namikawa (Japanese, DS Game)
"Have no fear, Dekar is here!"

A very strong warrior from the Bound Kingdom, though he lacks intelligence. He meets Maxim and the others and eventually joins them on their quest to defeat Gades. He is one of the characters who doesn't go to Doom Island.

Voiced by: Kenichi Ogata (Japanese, DS Game)
"I get it! So that's how it works!"

A scientist from Treadool. He meets Maxim and friends and discovers how strong they are. He travels with the party for a short time, even providing a ship for them, but he eventually leaves to work in a laboratory with other scientists. While he does not go to Doom Island or battle directly for the rest of the game, he continues to make upgrades to your ship. In Curse of the Sinistrals, he's around for much more of the game, but never playable.

Voiced by: Susumu Chiba (Japanese, DS Game)
"The worst thing you can do is lie to yourself."

An elf from the village of Eserikto. He first appears on the Mountain of No Return to find Milka, one of his elf friends. He meets Maxim's party on the process and decides to join them in order to track down the Sinistral of Chaos, Amon. He is one of the four heroes who goes to Doom Island to do battle with the Sinistrals. In the original game, he is still alive and well, albeit blind from the Battle of Doom Island.

The various monsters that you find throughout the game that are willing to fight for you.

A noble pirate that has more to him than meets the eye. Possesses Red Spiritual Force.

A gambler with a habit of cheating to win. Possesses Yellow Spiritual Force.

A descendant of the Shaia family. Possesses Yellow Spiritual Force.

Sinistrals
Four evil gods who wreck havoc on the world and act the series' main antagonists.

Gades is the Sinistral of Destruction, and he is always the first one to make himself known to the world at large.

Erim is the Sinistral of Death. Her survival is key to keeping the other Sinistrals from being permanently destroyed. She also happens to take on disguises as different mysterious women, such as Lufia, Iris, and Seena. She seems just as much an evil Sinistral as the others until the third game, where she herself is finally fed up with the cycle, so she tries to get herself and the other three destroyed for good.

The monster god of Eternal Flame which appeared in Lufia: The Legend Returns as the game's final boss. It becomes the most powerful of the Sinistrals, making its appearance in by absorbing Seena into it. The party race to beat it up right after the other four Sinistrals are defeated, before it can proceed to destroy the world.

"Us or humans? Which of us are really transient on earth?"

Arek is a being above even Daos. He asks Erim if humans or Sinistrals are superior, and alerts the Sinistrals to the resurgence of the Dual Blade that can defeat Daos and the others. Though he doesn't seem very evil.

Other Villains
Antagonists that aren't the Sinistrals, but may still be associated with them, though not always.

A follower of the Sinistrals. Serves as a minion to Gades. Kidnaps Hilda shortly after Guy joins the party.

A follower of "The Nameless" (the Sinistrals). Fights Maxim's party numerous times.

The military commander of the rebuilt Gratze Kingdom from Lufia: The Ruins of Lore. Plans to use the power of the ancient Beast to bring destruction upon the world, or so it would seem. However, there's more to him than meets the eye.

Maxim and Selan's baby. He's held captive by Idura, and is put to housemaid's care after his rescue.

A mysterious girl who aids Maxim in his quest once in awhile. No one knows her real intention. In the remake, she joins the team for most of the time as an NPC, and acts like a regular good sided character.

A couple of lowlife thieves who sneak into Parcelyte to steal the king's crown, and later the Ruby Angel. In the remake, they tried to steal Rochy's Ruby Apple.

Guy's girlfriend. Runs a shop in the remake, where you can also trade soul shards for reward items.

Guy's sister Maxim and Tia first met in a shrine to Tanbel.

A mystic beast who grants one wish to anyone who collects and hands him 8 Dragon Eggs, which are scattered around the world. Possesses Red Spiritual Force as a playable character.