Looking for Group is a fantasy Webcomic by Ryan Sohmer and Lar DeSouza, the creative team behind Least I Could Do and Blind Ferret Entertainment animation studio. It borrows from classic D&D conventions and World of Warcraft to tell an original story. 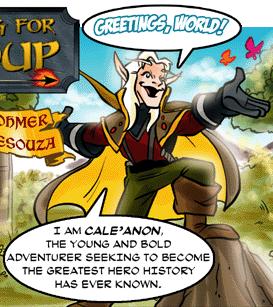 Cale is an elven hunter and the central figure of the group. Cale is seen as noble and virtuous to the point of naivete, while in the LFG universe elves are Always Chaotic Evil. After an seemingly accidental meeting with the less morally upstanding Richard, and additional company, he has since found his beliefs in the moral code challenged. Cale has proven an excellent fighter, skilled with both his twin swords and archery. As the series has progressed Cale has begun to gain more depth and grow used to Richard's gruesome sense of humor. He is fiercely loyal, breaking laws and risking death to protect his friends and allies. 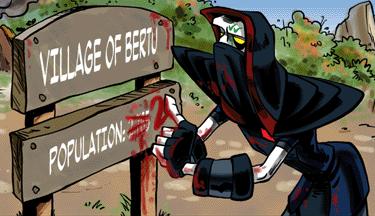 An average day for Richard.

An undead warlock who willfully sows destruction without any provocation whatsoever, Richard is Cale's foil and serves as the strip's comic relief. He is depicted as manipulative, both physically and magically powerful, exceedingly evil, and childish. He's very sensitive about his less-than-threatening name and reacts aggressively to Cale's nickname for him — "Dick." His companions often react mildly to his frequently psychopathic activities. 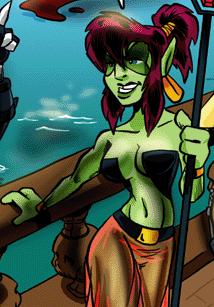 Benny is a priestess that Richard and Cale met while seeking a healer. Her exact race is unknown to most. It was earlier stated by her ex-husband Rojave that she has Mixed Ancestry. Benny is a talented priestess; she is able to resurrect others after death (as long as the death is recent enough), heal both minor and serious wounds, and create powerful magical shields in combat. She is also a highly skilled warrior trained by the Bloodrage Clan. She usually takes a pragmatic cynical view of the world. 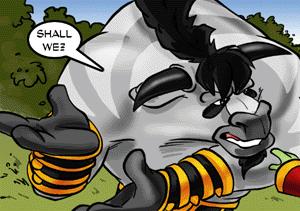 Krunch is the elder son of the Bloodrage clan's chief. His younger brother, Ray'd Bool, is the Bloodrage's battle leader and current chief. Although he possesses great strength and battle prowess, Krunch has admitted to being the scholar of the two brothers. Krunch has taken a fairly neutral side in the "good/evil" debate that is, essentially, Cale and Richard's relationship. While Cale believes strongly in good, and Richard equally strongly in evil, Krunch believes that people do what they must to survive and everything is, in essence, relative. Due to his secular nature, and the fact that he is generally able to give logical reasoning to his beliefs, Cale often looks to him for truth and advice. 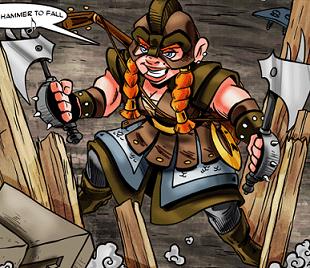 Pella of Clan Breem is a dwarven fighter from old Kethenecia, as well as the youngest child and only daughter of the Commander of the Kethenecian Royal Guard. After the death of her brothers in the war against the Vullii, Pella was given the choice of which path to follow: the axe (a warrior) or the lute (a bard). After a moment of consideration, Pella decided she liked the feel of both. When Cale and friends were sent to bring Kethenecia to the present, Pella was assigned to guide them to the city catacombs under the orders of the Archmage. She aided the heroes in holding off the Vullii and releasing the city from its temporal anchor, later deciding to travel with the Group to the present. Pella has since stayed with the party ostensibly as she "has nowhere else to go." An exceptional fighter as well as an enthusiastic singer, Pella is known to sing love songs to her enemies while dismembering and/or killing them.

A baby reptilian king, adopted and named by Richard.

The Archmage of Kethenecia is an old man, and a seer. Of questionable morals, he intended the city of Kethenecia to survive the millennia by shifting it into the future when the final attack of an alliance of many races was at Kethenecia's gates. The Archmage gave Cale the task to go down to the catacombs and "loosen the anchor." Unfortunately, as Cale found out, the "anchor" was in the form of a small child, and the Archmage's order translated into killing the boy. It was later revealed, after Cale had 'killed' the boy and left, that the young boy was actually the Archmage himself in a magical disguise.

The Archmage later traveled forward to the present date, witnessing what he sees as a new age for Kethenecia. It is eventually revealed that Richard's bunny is actually the Archmage in disguise, and that Richard has known for a long time who his bunny really is.

Leader of the trolls. First introduced as the second-in-command of Stoll, the troll warlord besieging the gnome city of Mechastone, he assumed command of Stoll's forces after the latter's death early in the comic. Some time later, he joined forces with the other tribes of the North to oppose the Legaran advance.

A big, fat and incredibly stupid troll, Tim is unusual among his fellows in both intelligence and body size. Very fond of Cale (whom he has named "Chicken" for some reason), he seems to mainly serve as a dogsbody for his smaller and much smarter brother Styx. Despite being a troll, he's actually very good-natured.

Knights of the Way

The monk who trained Cale while preparing him for his destiny as The Chosen One.

A Drow monk who was one of Cale's colleagues at the monastery.

A monk who was one of Cale's colleagues at the monastery.

A monk who was one of Cale's colleagues at the monastery. Their master forced him to make out with Shora in order to end their relationship.

A resident of the criminal underworld from the danger cast.

A powerful mage that specializes in experimenting on animals.

A group of deceptively cute golems that were originally meant as a safeguard against The Archmage going insane.

A Lizardman who wanted to kill Charles and take his place as king, as well as making sure Charles doesn't reach his 14th name day.