Here's a list of the allies and enemies found within the Tower of Barbs. 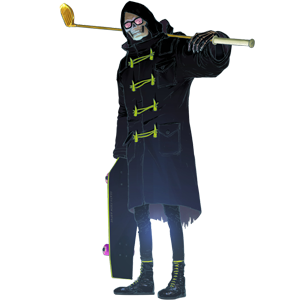 "Senpai! I was waiting for you!"

An 80s retro arcade within the Shibuya District of Tokyo, complete with the classic blue and pink neon look. May or may not be the real setting of the game. 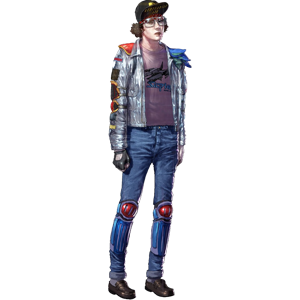 "My win streak's gonna be written about in sonnets and poetry for like a long time."

A fighting game fanatic and the spokesman for the DEATH DRIVE 128 game console. 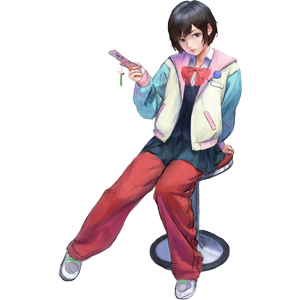 "Who keeps sticking gum under the counter? Oh that's mine, hmhm."

The clerk for the Hater Arcade. Doesn't exactly want to be there, but a job's a job.

A weird jukebox machine associated with the Let It Die game.

The Tower of Barbs Waiting Room

The first basement floor is the lowest section of the Tower, hosting innumerable Waiting Rooms to house all the people who want to climb the Tower.

Momoko Yamada, now known as the "Mushroom Magistrate", a former backpacker and foremost expert on mushrooms. Runs the Mushroom Club within the Tower of Barbs. 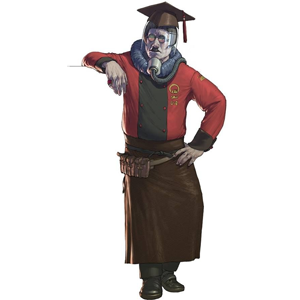 "Welcome. Our express service is all you need to climb the tower."

A mysterious man who runs the Chokufunsha shop. He mainly serves as an equipment engineer, researching and upgrading new equipment from blueprints found in the Tower. 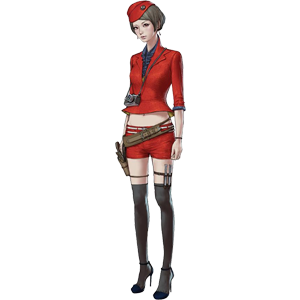 "Another new arrival... looks like things are about to get busy around here." 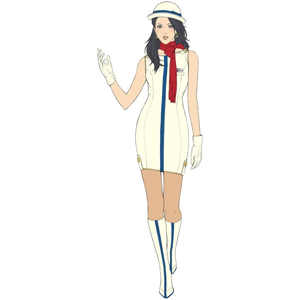 "I am not well versed when it comes to escalators."

Another DH employee. She works as the DH Express elevator operator, which said elevator can only be accessed by people with DHE memberships. 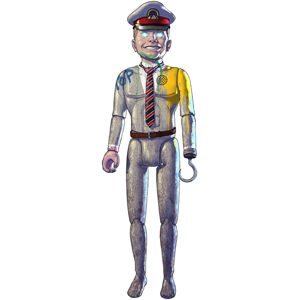 "Here we go! Thank you for using the Tokyo Death Metro."

An electronic mannequin within the Waiting Room that runs the Tokyo Death Metro, allowing players to raid each other's Waiting Rooms.

Yotsuyama Enterprises' official spokesperson and company mascot, the good Captain leaves players game hints and updates them on potential events and rewards via e-mails sent to the Underworld Rolodex.

The Tower of Barbs Proper

A massive tower settled on a 3.7 square mile island in the remains of South Tokyo. Said to hold a world-altering treasure at the top, but is filled with all sorts of nasty shit. It stands an estimated 1,686 feet (514 meters) tall, although rumor has it that the Tower is still getting taller.

Fighters
Player-controlled characters who operate within the tower as avatars of the players.
Screamers
Feral Fighters who inhabit the Tower. Their gears and level changes each time you load their area.
Haters
Fighters who had been killed within the tower, and subsequently revived by the Dons to hunt down and kill other Fighters.
Hunters
Fighters sent into the Tower by players on Expeditions. They are virtually identical to Haters and can even take their place in a level, but they are not controlled by the Dons and are thus very much alive as they attempt to assassinate you and gather resources.
Beasts
The Tower of Barbs plays host to a varied selection of wildlife descended from the unfortunate animals that were lifted up and trapped within its confines during the Earth Rage. Unprotected from the deadly spores prevalent in the structure, each species is afflicted with its own unique parasitic fungus that fully takes over their bodies when they die, making them handy assets for nutritional and combat purposes. However, some are easier to subdue than others.
Tubers
Cybernetic beings created by the Yostuyama Group's science division, named such for the tube-shaped power cells they have located on their bodies. They were made by its chief scientist, Professor Terada, who wanted to get some use out of the corpses left behind in the wake of the Earth Rage tectonic disaster.
Jackals 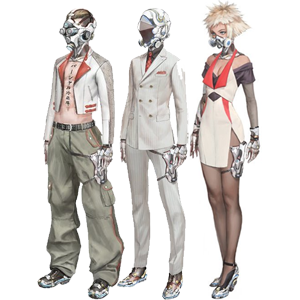 Scavengers employed by the Dons to collect bodies to transmogrify into Haters and equipment to sell on the black market.
Voiced by: Verne Troyer (Jackal X), Mark Rolston (Jackal Y) and Traci Lords (Jackal Z)
The Three Shocks Terror
A trio of Supersoldier experiments created by the Yostuyama Group's Professor Terada, who believed that he could easily create better artificial lifeforms by combining multiple subjects together with some weapons thrown in for good measure. While more intelligent and powerful than the company's Tubers, Terada didn't put too much stock in completing any of them, resulting in each of the three inheriting a glaring sensory shortcoming that the player can exploit in battle. They act as recurring mid-bosses throughout the various tiers of the Tower of Barbs, gaining stronger tactics and new attacks at each higher encounter.
U- 10
Bar none, the deadliest and most sophisticated cybernetic warrior living in the tower. U-10 forgoes the flashy grotesqueries and gimmicks of the Terrors and Tubers in favor of efficient, widespread lethality.
Forcemen
Four monstrosities that arrive during special events in rotation, their equipment surpasses the Jackals and their difficulty can be set from normal to Nightmare to get their material.

The first of the Forcemen, White Steel lurks within the run down tunnels belonging to D.O.D Arms. He can be found on 4F Reginaka, 5F Omeno-Inari, or 8F Ko-Oni in his normal, hard and nightmare forms respectively.

The second of the Forcemen, and the only female member. Red Napalm waits in the War Ensemble's city ruins, taking on all comers. She can be found on 12F Fuga-Dokoro, 14F Fune-Hashi or 17 Kyuzaka during her Tectonic Terror events.

The fourth and final Forceman, Pale Wind haunts three floors in the M.I.L.K district. He can be challenged on 32F Shirokin, 35F Dainoba, and 38F Takanowa.
Kommando Kawasaki
Kommodore Suzuki's brother. A 51-year old former blackmarket dealer who has set up a mobile department store in the Tower of Barbs, selling all manner of premium goods while raising his infant son. His shop can be found in the dead-end side rooms of the Tower. Upon chancing upon it, its location won't change unless the game is turned off whereupon it will move somewhere else.
Voiced by: Steven Bauer
Max Sharp 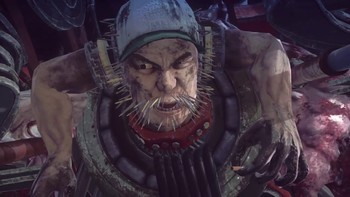 The first Don of Barbs, you have to kill him to reach the surface since his head is the stamp. A workshop seller/gang leader who cut his own arms at a young age and stitched them on his head (just roll with it) so he could engineer better. He resides on the tenth level aboard the Barbs metro. His story is told in Tales of Barbs. His Screamers are armed with diverse weaponized hardware.
Voiced by: Blaine Cartright
Colonel Jackson 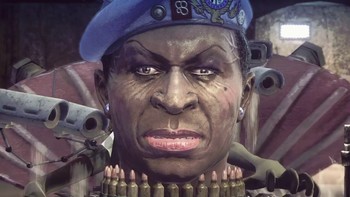 Second Don, known as the happy bomber in his military days due to his passion of taking selfies near the explosions of the bombs he created. His area is a ruined city fielded with landmines, where the Screamers are armed with military gear and machetes.
Voiced by: Billy Dee Williams
Mr. Crowley 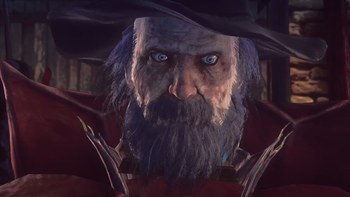 The Third Don and head of the Candle Wolf faction. Once a promising Swedish wunderkind and an up-and-coming leader in the field of energy research, Crowley vanished from his hometown without a trace only to reappear some time later with a wizened appearance and a homemade plasma weapon that he used to kill 200 people. Now he presides over an inexplicably vibrant and colorful part of the Tower filled with gaudily dressed and armed Screamers who he considers to be his servants.
Voiced by: Jason Acuna
Taro Gunkanyama 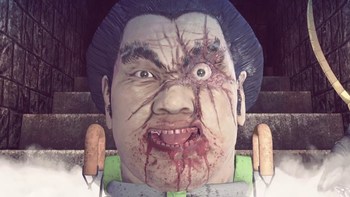 The Fourth and Final Don of the Tower of Barbs who lives right under the structure's summit and presides over its final stretch which consists of the demolished rooftops of Tokyo skyscrapers. A former Sumo Wrester and a major sports fanatic, he's decked out his minions of MILK with deadly, high-quality hybrid athletic equipment.
Voiced by: Yuki Matsuzaki