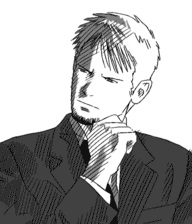 Kyle as he appears in Last Window

Fired from Red Crown and facing eviction in two weeks due to Cape West Apartments' sale, the ex-detective's fortunes look particularly dim when a mysterious order sheet arrives requesting him to search for the "Scarlet Star", which disappeared in the building 25 years ago. Lives in room 202.

The young mute woman whom Kyle met in Hotel Dusk, Mila has now returned to normal life and is currently attending art school out of state.

Finally tired of Kyle's attitude, Ed fires him from Red Crown at the beginning of the game, but still keeps contact from time to time.

Ed's secretary and a friend of Kyle's.

The owner of the Cape West apartments and Kyle's landlady. She thinks highly of herself and is always dressed to impress. She has her own highly opulent living quarters in the apartments. Less likely to toss you out of the apartments than Dunning would the hotel, but it's still not a good idea to make her mad.

A woman who lives by herself at Cape West after her husband and brother died in a car accident. Lives in room 206.

A mysterious man who shows up at Cape West after Kyle begins investigating. Seems to know Marie and Kyle, though Kyle doesn't know him.

A down-on-his-luck musician who lives at Cape West. Since nobody buys his albums, he's always short of cash and tends to bug people to let him borrow money.

Kyle's mother, who lives on her own in New Jersey.

The owner of Lucky's Cafe at Cape West, a kind man in his fifties who takes pride in his work.

Sidney's daughter who helps him out at the cafe.

One of Kyle's neighbors at Cape West, an energetic and kind woman who tends to complain when her neighbors get too noisy. Lives in room 203.

An aspiring student filmmaker who lives at Cape West. Lives in room 305.

A somewhat grumpy old man who spends his days wandering the halls of Cape West. Lives in room 302.

Will White (Will McGrath)

A gentlemanly salesman whose behavior is the opposite of Kyle's. Lives in room 306.

Kyle's father. A master thief who decided to give up his life of crime for his family, he was killed during his final job when Kyle was nine.

Michael's late wife, who was found dead in the hotel thirteen years ago.

An ex-cop who is being elected for mayor.