Charles Xavier is a professor of genetics and also one of the most prominent mutants in the world. At a young age, he was friends with Magneto, only for their ideologies to clash and them to become enemies. After losing the use of his legs, Charles founded the X-Men and converted the Xavier Mansion into a school and sanctuary for all mutants.

Scott Summers is one of Charles Xavier's first mutant students, and the leader of the X-Men in the field. Scott is an accomplished combatant, and also the love interest of Jean Grey.

Jean Grey was one of the original students at the Xavier Institute, and one of the original members of the X-Men. She is best known as an Omega-level mutant and telepath who may or may not have gone insane and turned into the Dark Phoenix, as well as the love interest of Scott Summers.

Robert "Bobby" Drake, aka Iceman, is one of the original students of the Xavier Institute and an original member of the X-Men. He's known for being something of a class clown, but also for potentially being one of the most powerful mutants in history. His powers are mostly ice-based.

Henry McCoy is one of the original members of the X-Men, and one of the oldest teachers at the institute. Originally, Beast looked more human, but he gradually mutated from human-looking to animal-like as he began to grow fur and more prominent claws. As well as being a teacher, Beast is a world-renowned biochemist.

Originally a street thief in Cairo, Ororo Munroe was recruited by Charles Xavier into the X-Men after he saved her from the Shadow King. Since then, she has joined as a teacher but has since taken the reins of command from Cyclops when necessary.

Wolverine is one of the better-known members of the X-Men. Initially a soldier and mutant, Wolverine was involuntarily taken in by Weapon X and experimented on repeatedly, with the process costing him some of his memories but granting him adamantium bones and claws, which made him the killing machine they desired. Eventually, he escaped and joined Department H before Charles Xavier recruited him into the X-Men.

Piotr Rasputin is a Russian member of the X-Men that left his homeland to join the X-Men. He has the power to turn his skin into solid metal, as well as super strength.

A former thief, Remy LeBeau joined the X-Men after eventually turning away from his life of crime. He has the power of exploiting kinetic energy, and has advanced physical abilities.

A former supervillain, Emma Frost eventually joined the X-Men as one of its teachers.

The playboy son of a billionaire that hated mutants, Warren Worthington III joined the X-Men as Angel. After his original set of wings were lost, he gained a set of metallic wings by making a Deal with the Devil with Apocalypse, although he eventually was freed from the tyrant's servitude and returned as Archangel. Along with the ability of flight, Archangel has the ability to fire metallic blades from his wings.

The sweetheart and later wife of Reed Richards, Susan Storm worked with Reed on his scientific project, joining him on his mission into space. The resulting exposure to cosmic rays gave her the ability to generate forcefields and turn invisible. She is the sister of Johnny Storm, aka the Human Torch.

The leader of the Fantastic Four, Reed Richards is the husband of Susan Richards. He led an expedition into space along with his team, consisting of himself, Sue, Johnny Storm and Benjamin Grimm. The resulting cosmic radiation mutated them into something not quite human, giving Reed the power to stretch his body into unnatural shapes. With his powers, he decided to become a superhero.

The younger brother of Susan Richards, Johnny Storm joined his sister, future brother-in-law and Ben Grimm on their adventure to outer space. The subsequent exposure to cosmic rays left him with the power of flight, as well as the ability to turn himself into a man Wreathed in Flames, as well as shoot fire. He has a very fiery friendship with Ben Grimm.

The college friend of Reed Richards and one of his best friends, Ben Grimm was also an accomplished pilot and college graduate before he joined Reed's ill-fated expedition. The resulting exposure to cosmic rays left him with a very durable body and superhuman strength, but also with a hideous appearance that he was stuck in forever. He has a very rocky friendship with Johnny Storm.

The Robot Buddy of the Fantastic Four. 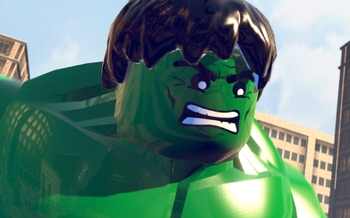 Voiced in both forms by: Fred Tatasciore

Doctor Bruce Banner was turned into The Incredible Hulk after being exposed to gamma radiation in a freak accident. Initially, Banner found himself unable to fight his anger, causing him to transform into the beast and go on rampages, bringing him into conflict with other superheroes and the military, who believed him to be property. After life on the run from the military, Hulk has decided to go legit as a superhero and joined the Avengers. Since then, he has gained the ability to shift back and forth between Hulk and Bruce Banner at will. 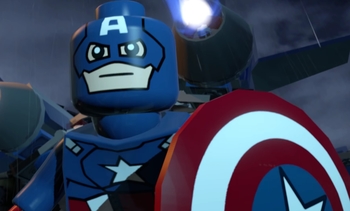 Steven Rogers was formerly a sickly man that Jumped at the Call to fight for America in the Second World War, although he was rejected as unfit for duty. He was enrolled in a Super Soldier programme and raised to levels of peak endurance via a Super Serum that was since lost for good, since the scientist that devised it was assassinated. Captain America was then frozen in ice for several years, re-emerging in modern times as a superhero.

Thor Odinson is the prince of Asgard and son of Odin, the Allfather. Initially banished from Asgard to learn humility, Thor has since become a guardian of both Earth and Asgard, making him a member of the Avengers. Among the rogues gallery of the Avengers is his stepbrother Loki.

Tony Stark is the head of Stark Industries, as well as the superhero Iron Man, who fights crime in a suit of Powered Armor. His initial reasons for doing so were in order to stop his heart from giving out after he was injured in a war by shrapnel, although which war is unclear for this incarnation. He's supposedly one of the richest men in the world, and certainly one of the most arrogant, but he's a good man at the end of the day.

Spider-Man, a.k.a. Peter Parker, is a former high-school student that was bitten by a radioactive or genetically-modified spider on a high school field trip. This gave him enhanced strength and agility, as well as the ability to perceive danger and detect incoming threats. Shortly afterwards, his uncle and father figure, Benjamin Parker, was killed by a robber that Peter could have stopped had he bothered to. This taught Peter the lesson that with great power comes great responsibility, causing him to fashion a pair of web-shooters and become a superhero, eventually joining the Avengers.

The director of SHIELD, Nick Fury is responsible for keeping the world's superheroes and supervillains in check. 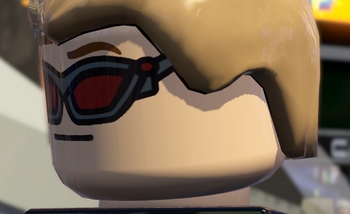 A SHIELD agent that specialises in archery, Clint Barton aka Hawkeye is a powerful fighter and works alongside Natasha Romanov. 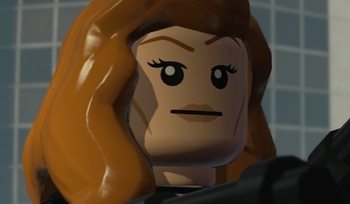 A former assassin, Natasha Romanoff AKA the Black Widow eventually had a Heel–Face Turn and joined SHIELD as one of its top agents. She is frequently paired with Clint Barton for missions.

A SHIELD agent that ranks relatively high up, Coulson is one of the few normal individuals in the Marvel Universe.

Initially a being known as Norrin Radd, Radd became the Silver Surfer after Galactus threatened to destroy his world, but offered to spare it if Rad became his herald. Now, as Galactus' servant, Silver Surfer initially searches for new worlds for his master to devour. However, he later stumbles across Earth and after an initial pursuit from Iron Man, he has a rapid change of heart.

The keeper of the Bifrost, and one of the most powerful Asgardians, Heimdall is loyal to Asgard and Odin.

The co-creator of Marvel Comics, responsible for a large amount of the original Marvel heroes known and loved today. He appears throughout the game, often in perilous situations that the heroes have to bust him out of.

Known as the "Merc with a Mouth", Deadpool is a mercenary with a healing factor and a rather unstable state of mind. He narrates most of the bonus mission briefings.

The AI that helps Tony Stark in his affairs and heroics.

Guardians in General
The Guardians of the Galaxy. This group of heroes does not show up until after the main campaign is finished.
Star-Lord 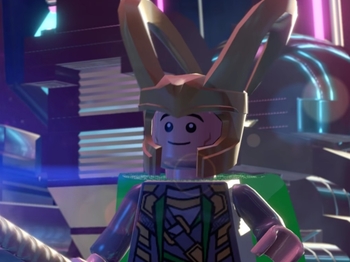 The Brotherhood in General
Mystique

Venom is the combined entity resulting from the merging of a symbiotic alien called a klyntar and a human host (although Eddie Brock is the most famous host, his current host is not known). "Exploratory, Laboratory" reveals that Oscorp has been holding him hostage, at which point he is released by Green Goblin as a distraction.

The mechanical servants of Doctor Doom, programmed to do his bidding.

Wilson Fisk is the head of a crime syndicate, who poses as a legitimate businessman. He's known as an Arch-Enemy to Daredevil, and Spider-Man on occasion.

An assassin and Kingpin's right-hand man, alongside Elektra.

A Skrull with the combined powers of the Fantastic Four