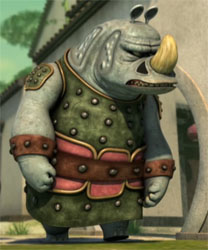 "My revenge will be like a poison river of molten iron that drips and burns like iron that has been melted and now drips... and burns."

One of the former guards of Chorh-Gom prison, who lost his job after it was shut down after Tai Lung's defeat, which caused him to lose his house, his family, two goat friends, and a pair of slippers. Po met him during the Dragon Warrior Day celebration, and attempted to get his life back on track by getting him a job, a place to stay, and by teaching him kung-fu in order to quell his rage. Unfortunately, once he learned Po's true identity, he attempted to kill him only to be defeated and ends up with his horn broken off. Ironically, his actions caused Chorh-Gom to be reopened... with himself as its first new inmate. 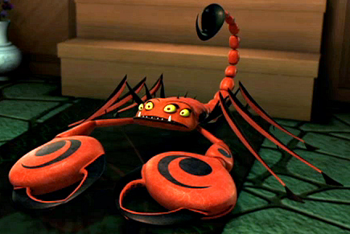 "This is going to sting a little bit — just kidding. It burns like fire!"

A former healer who was banished after discovering hypnotic elixir and attempting to take over the Valley of Peace with it after she accidentally injected herself with it. 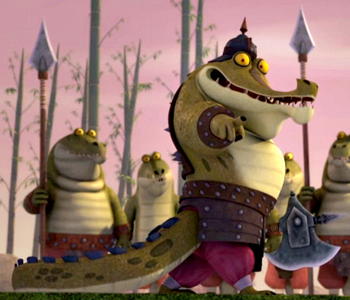 "Looks like we're gonna do this the hard way!"

Fung is the leader of a group of Crocodile Bandits. He most often relies on weapons to fight his opponents, but has been show to know some Kung Fu techniques, mostly in cases of defense. Fung appears regularly, sometimes leading his bandits, and other times serving as a lackey to another villainnote Such as Tong Fo or Evil!Po. 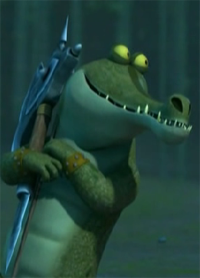 A member of Fung's bandit gang, who would like to remind you that it's "Gah-ri", not "Gary."

Fung's formerly little cousin who grew into a titanic powerhouse far more dangerous than any of the other crocodile bandits. Huge, resistant to all blows and really, really strong, Li-Dong is consistently a powerful threat to the Jade Palace. 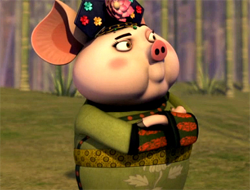 "You think I don't know nobody likes me? You saw them pretend to, but... it's just because I'm a princess."

The daughter of the emperor, who was sent on a mission of peace to the kingdom of Qidan. Though she proved to be an insufferable brat at first, Po eventually got through to her and the two became friends. Eventually, it was revealed that she was to be offered to the Qi Dan as a servant to the Qidan's king, Temutai, in exchange for peace, but Po challenged him and successfully earned Mei Li's freedom. 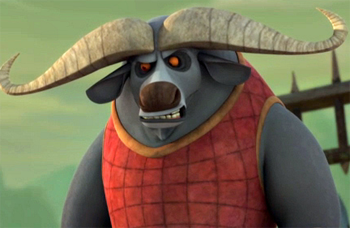 The king of the Qidan Clan, a group of warrior water buffalo, whose people once waged war with Mei Li's kingdom, until an agreement was made to bring peace. Said agreement was that the emperor must turn over a princess to be his royal servant, in exchange for the Qidan not attacking. Mei Li was set to become his new servant, until Po defeated him in battle, earning her freedom.

Temutai appears regularly, usually as antagonist. One time he came to the Valley of Peace as part of a peace celebration, where he's amiable with Po and the others (though, with some hiccups along the way). 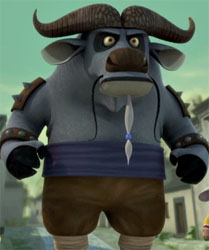 Temutai's nephew, who he brought to the Peace Ceremony in order to participate in the children's kung-fu matches. He ended up losing to Peng. Has a sister, who is apparently much better at kung fu than he is. 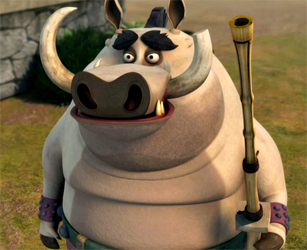 "Well, I have news for you! Kung Fu is outdated and useless! With machinery comes power!"

A warthog who studied kung-fu under Master Oogway alongside Shifu. Unlike Shifu, Taotie was a poor student; no matter how hard he trained, he couldn't keep up with Shifu. Together, the two of them created the Jade Palace's training hall. However, Taotie was still unable to improve his kung-fu, so he turned to machines to make up for his weaknesses, only for him to be cast out after unveiling his invention after they told him it sullied the purity of king-fu. Years later, he would manipulate Po, who had accidentally wrecked the training room, into helping him sneak into the Jade Palace so he could create a new machine and take his revenge.

Taotie appears regularly, usually attempting to gain vengeance on Shifu and assert the dominance of machines over kung-fu. 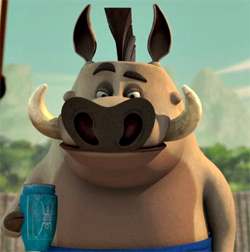 Taotie's apathetic, slacker son, who effectively serves as his henchman. He doesn't seem to care much for his dad's work, despite Taotie saying he's "learning the family business." Bian Zao appears regularly with his father. 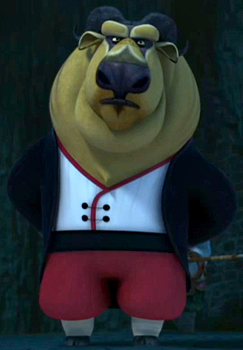 Jong is a takin who rules over a land that does not abide trespassers. Fung tricked Po into helping him kidnap his son for ransom, and in response, Jong had Po arrested. Even when Fung returned his son and confessed, Jong was still going to hold them captive for their crime. 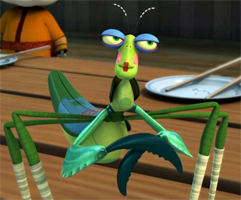 Mantis's ex-fiance, who only took him back after he (falsely) claimed to be the Dragon Warrior. They were set to be married (again), when Mantis admitted the truth, and realized that Hao didn't deserve him. 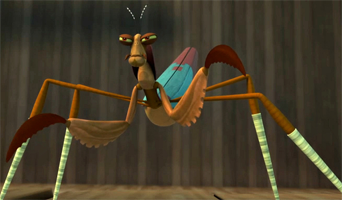 Hao's ex-boyfriend, who she dumped two hours before getting back together with Mantis. Dosu attempted to fight Mantis and get her back, only for Hao to continue to show disinterest in him. 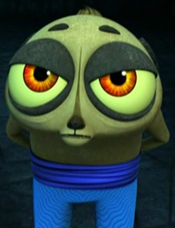 "What a beautiful day... to be destroying the valley of peace!"

A loris incarcerated in Chorh-Gom Prison, who once attempted to destroy the Valley of Peace with the devastating Sacred War Hammer of Lei Lang, but switched it with a fake before being captured. In order to learn the location of the real hammer, Po went into the prison disguised as a criminal, only for Tong Fo use him to help him escape. Tong Fo was eventually stopped and recaptured. 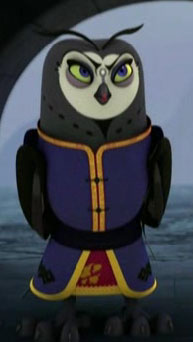 An owl who was once the most powerful member of the previous Furious Five, who consisted of Shifu, Elephant, Rooster, Snow Leopard, and herself. As Fenghuang grew stronger, she fell to evil, and attempted to wrest control over the Jade Palace from Oogway. Oogway defeated her and attempted to imprison her in an owl-shaped cage, only for her to flee. Years later, she encountered Po and learned Oogway had passed and returned to gain her vengeance on Shifu. She attempted to turn Po to her side, only for him to trick her and seal her in the owl-shaped cage. She was later taken to Chorh-Gom prison which she escaped from multiple times. A chance encounter with Po led to her gaining complete control of time and subsequently being banished to oblivion for disrupting the time stream. 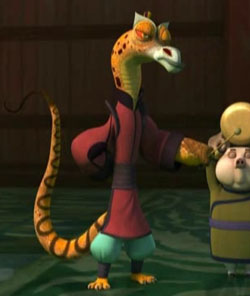 A monitor lizard and one of the xiaolin masters of the Sacred Onyx Council. He first appears to evaluate Shifu's qualifications as a master, and after Junjie manipulates Po, he removes Shifu and places Junjie in charge. Fortunately, he later arrived and overheard Junjie's machinations, and once the sinister fox was defeated, he re-installed Shifu as the master of the Jade Palace. 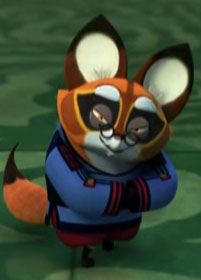 One of the two xiaolin masters of the Sacred Onyx Council. He became resentful and jealous of Shifu after Oogway chose Shifu to be master of the Jade Palace instead of him. After arriving to evaluate Shifu's qualifications as Master, he manipulates Po into getting Shifu dishonored and removed from his position as master of the Jade Palace. Once in charge, he throws out Po and the Furious Five, putting his five leopard underlings in their position. However, Po became wise to his schemes, and eventually, he was defeated and thrown into Chorh-Gom prison with his five servants. His next appearance, presumably after escaping, shows him impersonating the ghost of Oogway in order to sow discord within the Jade Palace. 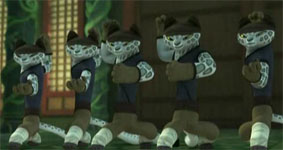 A quintet of five snow leopards that serve Junjie. After Junjie takes over as Master of the Jade Palace, they replace Tigress and the others as the new Furious Five. However, they are ultimately defeated by the originals when they come to save Po and Shifu, and are later incarcerated with him in Chorh-Gom prison. 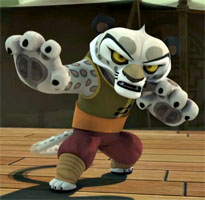 A young snow leopard on a journey. After visiting the Valley of Peace during the Peace Jubilee, his kung-fu talents were discovered after he won a match against Temutai's nephew. He was immediately invited into the Jade Palace, quickly becoming popular and earning Po's jealousy. In an effort to drive him away, Po lied to Peng, only for him to become angry and attempt to defeat Temutai in order to prove himself. Po later revealed the truth and apologized, leading to Peng giving up and apologizing himself. In the end, he returned to his journey. He also reveals that he is the nephew of Tai Lung. 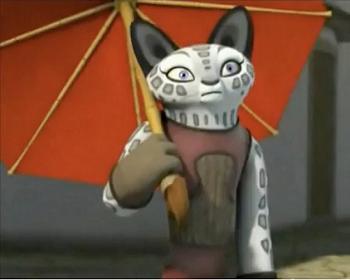 A member of the "Ladies of the Shade", a dancing troupe of snow leopards which is in actuality a group of clever thieves. When their leader, Su, decides to trick Po into inviting them into the Jade Palace so that she can steal the Dragon Chalice, she chooses Song to worm her way into the Dragon Warrior's good graces to accomplish this task. However, things don't go quite as Su had planned... even though they do get away with the chalice, when Po goes to recover it Song ends up changing sides and helping him escape. After Su is captured and sent to prison, Song takes over the Ladies of the Shade and will be helping them all reform.

A strict elephant who upholds several laws in the Valley of Peace. 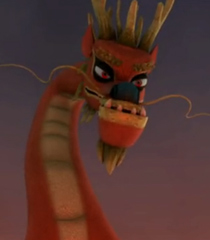 An ancient demon resembling a dragon who wreaked havoc on all of China until he was defeated and trapped in the guise of a pig.

A once noble and brave cobra who defended the land from evil-doers. He later turned renegade when he and his clan were betrayed and persecuted by others out of paranoia and hatred.

A goldfish as well as a strict Kung Fu Master who temporarily tutored Tigress in the episode "A Tigress Tale".

A kind, yet crafty fox who used to date Shifu years ago. However, when Shifu learned she used her kung fu skills to steal, he broke up with her.

Shifu's estranged father and a skilled thief. Years ago, he took his son to the Jade Palace and told him to wait for him there while he went out. However, he never returned and Shifu was taken in by Oogway. Centuries later, he returned in search of his son and money.

An old master who spends every moment in a box sadan chair pondering kung fu, he is a wise and eccentric figure who is capable of performing feats that seem to be magic such as flight and freezing time.

A renegade samurai clam from Japan who sought to take over the nation. He comes to China in order to build an army with stolen gold in the episode "The Way of the Prawn".

A samurai prawn from Japan's Ishida clan, who comes to China to hunt down Kira.

A wealthy gazelle whom the Jade Palace asks to help end a famine.

The leader of the Lao Shu, a huge gang of rats that pillage and plunder food and wealth.

Centuries ago, this Siamese cat was part of a peaceful group of mystics who wished to share their magic with all of China in order to promote peace. However, the common people of the time feared their powers, and when Pang Bing and her colleagues appealed to the Emperor of the time for protection, he had them imprisoned. Pang Bing alone managed to escape while the rest of her group apparently perished, and swore revenge on all of China. She spent centuries perfecting dark magical arts that apparently enabled her to live far longer than should have been possible, all in preparation for her eventual conquest of China. She appears in the series finale, Emperors Rule.