This is for the various characters that show up in the non-canon King's Quest games and fan fiction (FanWorks.Kings Quest).

open/close all folders
The Royal Family
The rulers of Daventry, and the main protagonists for (most of) the games. 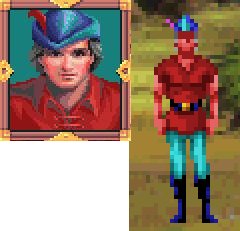 The patriarch of the family. Originally started out as Sir Graham, the son of one of Daventry's knights, but a Succession Crisis caused King Edward to offer him the crown after he proved his loyalty and cleverness in a quest. As a result, while Graham is wise and just in terms of actual ruling. Protagonist of KQ1 (fan remake), KQ2, The Silver Lining. Depending on the fan games he may act similarly to or even be voiced by the same actor from the original canon games, see King's Quest. 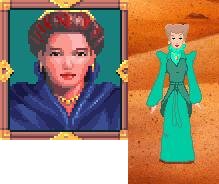 A maiden who was imprisoned in a tower by an evil witch and eventually rescued by Graham. As a result of her noble background, she tends to be more poised and cultured than her husband, and helps him run the castle and navigate around royal customs. Somewhat more sedate and homebody than the rest of the family, though when Rosella is lost at one point she proves to be a competent adventurer regardless while searching for her. Shares the role of protagonist in one fan game Breast Intentions.

The female half of the Royal Twins. Tends to take after her father in personality and and her mother in looks (at least according to the fan stories). While she generally is well-meaning and accepts her role as potential queen, she does have her moments of being rebellious and a bit bratty (The Silver Lining makes reference to this alot).

The male half of the Royal Twins. Tends to take after his father in looks and his mother in personality (at least according to the fan material). Outwardly calm and well-mannered, but with a core of craftiness, passion, and self-doubt. Also, give him a Spell Book to work from, and he's a dangerously competent sorcerer. Protagonist of KQ3 VGA and KQ3 Redux.

A fairy prince who's the son of King Oberon and Queen Titania, but was kidnapped and raised for a long time by the evil witch Lolotte. It was when Rosella came to defeat Lolotte that he met her, and was subsequently rescued and returned to his family. He later met up with Rosella again in KQ7 where the two (eventually) marry.

Features in KQ4 and KQ7. 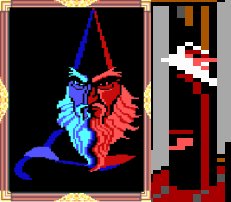 An old Evil Sorceror who's the Sorcerous Overlord of Llewdor, and lives in a mansion overlooking the country. His nastier habits besides terrorizing Llewdor's citizens involve enslaving young boys to do his chores until they come of age and he disposes of them, and dispatching his adversaries via turning them into housecats. Brother of Mordack, an equally Evil Sorceror. He shows up in . 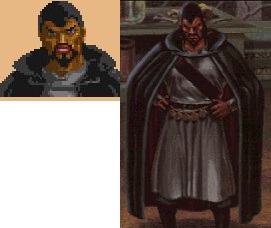 Brother of Manannan and main antagonist of KQ5. He steals Castle Daventry and shrinks the Royal Family, threatening to feed them to Cat!Manannan if they don't restore him to normal. He has his own Island Base and plenty of strange-looking Mooks.