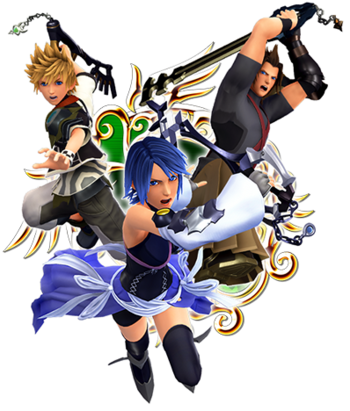 Terra, Aqua, and Ventus were three best friends training to be Keyblade Masters under Master Eraqus. Ten years before Sora, Riku, and Kairi began their journey, a threat known as the Unversed threatened the world. The three set out to defeat the Unversed and find answers, setting in motion events that would define the battles of the entire Kingdom Hearts series.

open/close all folders
All Three

"What I do, I do for friendship."
Click here 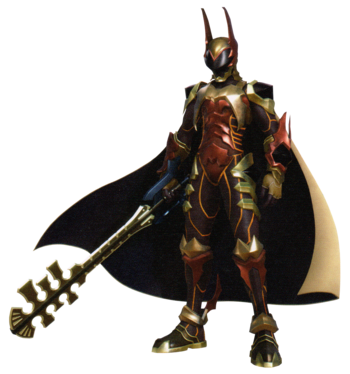 to see The Lingering Will

An aspiring Keyblade Master training under Eraqus, he has outstanding power and skill, but lacks discipline and allows darkness into his heart out of fear of failure. Denied the rank of Master by Eraqus, he eventually becomes an apprentice to Xehanort and resolves to learn to embrace and channel darkness rather than reject it.

As a result of Master Xehanort's machinations, Terra's body is transformed into a new Xehanort under Master Xehanort's control, containing both of their hearts. However, Terra's hatred for Xehanort was strong enough to reanimate his discarded Keyblade Armor as the Lingering Will. The Lingering Will defeated Xehanort and then went to rest in the Keyblade Graveyard. Sora encountered it during the events of Kingdom Hearts II, where it battled him and acknowledged his worth as a Keyblade Master.

A rookie Keyblade wielder who trains alongside Terra and Aqua at the Land of Departure. He runs away from home to find Terra after receiving a warning of things to come. Despite not being as skilled as the other two, he's still a capable combatant and is eager to explore new worlds and make friends. He has some connection to Master Xehanort and his new apprentice Vanitas, which he cannot remember.

The events of Birth By Sleep damage Ven's heart to the point he loses it, causing him to fall into a coma. Aqua places his body to rest in Castle Oblivion to hide him while he recovered. Somewhere in the castle's halls, Ven is still waiting to find his heart again and wake up. The last cutscene of the game reveals that his heart made its way to Sora and rests inside him, still to this day.