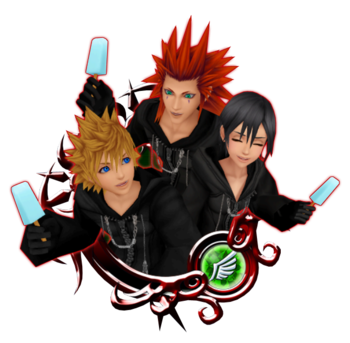 The best of friends, Axel, Roxas, and Xion were Organization XIII's number VIII, XIII, and XIV respectively. Roxas and Xion, who are amnesiac and curious about the world, would rather hang around Twilight Town and eat sea-salt ice cream than worry about the Organization's plans; Axel, though knowing about said plans, nonetheless treats the two as his friends, rather than as the Organization's tools. Things start to fall apart when Xion and Roxas begin to attempt to learn more about their pasts, while Axel tries to balance lies and the truth to keep them together. 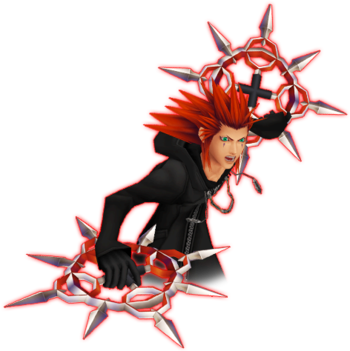 "My show now, Keyblade master! Who am I? Oh, my name's Axel. Got it memorized?"

"What's your problem!? You both... think you can do whatever you want. Well, I'm sick of it. Go on, you just keep running! But I'll always be there to bring you back!"
Org XIII's 8th member and the only one to survive Chain of Memories. Days reveals his Other's name to have been Lea, and then Birth by Sleep reveals that he was best friends with Isa, Saïx's Other. He appears regularly in Kingdom Hearts II, striving to bring Roxas out of the fake Twilight Town, and later pulling a Heel–Face Turn and helping Sora on his quest. However, he ends up pulling a Heroic Sacrifice to save Sora at the end of the game. In Dream Drop Distance, Axel is revived as Lea, his original self and helps Riku and Sora throughout the story. Towards the end of the game, it is revealed that Lea has gained the ability to wield his own Keyblade. For tropes specific to Lea, see Lea's folder on this page.
Lea 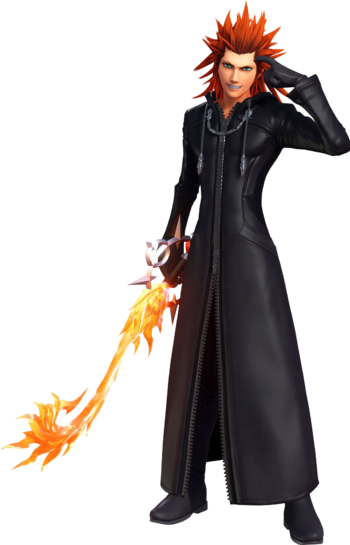 "You kidding? Do you know how popular I am? I got loads of people rootin' for me!"
Click here to see Young Lea: 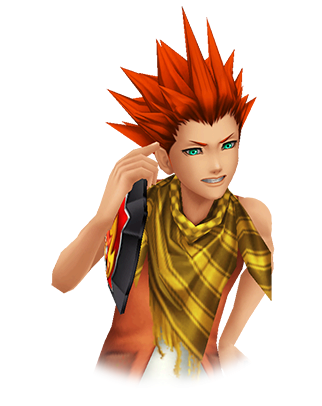 Click here to see Lea in his Twilight Town attire: 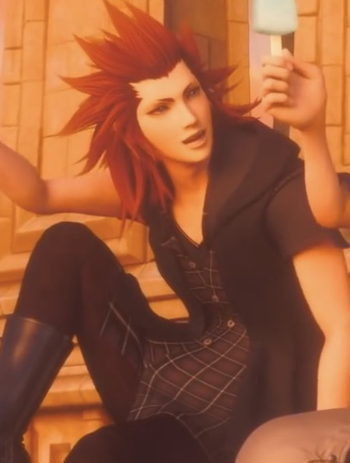 "Axel? Please. The name's Lea. Got it memorized?"
Lea is the complete being of Axel. Birth by Sleep reveals that Lea was best friends with Isa, Saïx's Other. In Dream Drop Distance, Axel is back as Lea, his true self. Towards the end, it is revealed that Lea has gained the ability to wield his own Keyblade, and will thus undergo training alongside Kairi.
Xion 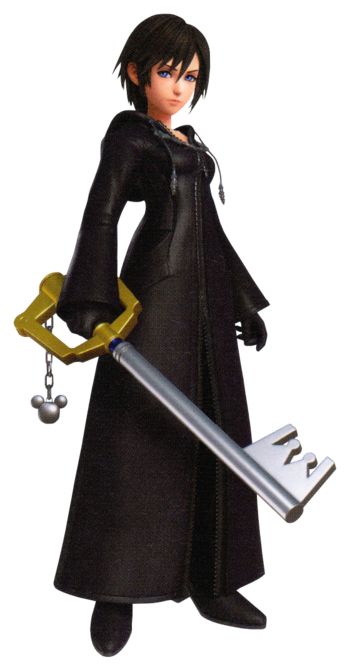 "Who am I? What am I... here for?"
Click here to see Xion in her Twilight Town attire: 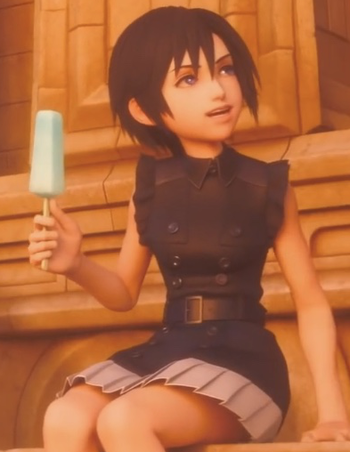 "Good-bye, Roxas. See you again. I'm glad...I got to meet you. Oh...and of course, Axel, too. You're both my best friends. Never forget. That's the truth."
Number XIV of the Organization, introduced in 358/2 Days. A Keyblade wielder unable to remember her past like Roxas, she joins up shortly after him and they quickly become friends. It's later revealed that she's not a true member of Organization XIII or even a Nobody; she's a replica of Sora created from his escaped memories, and acts like a cage for the memories and a "backup" if Roxas or Sora were proved to be worthless to the Organization. Ultimately, Xion learns her existence threatens Roxas's and prevents Sora from waking up, and she decides to trick Roxas into killing her as a way of ruining Xemnas's plans.