This is a listing of Ansem the Wise and his four apprentices that appear in the Kingdom Hearts series. 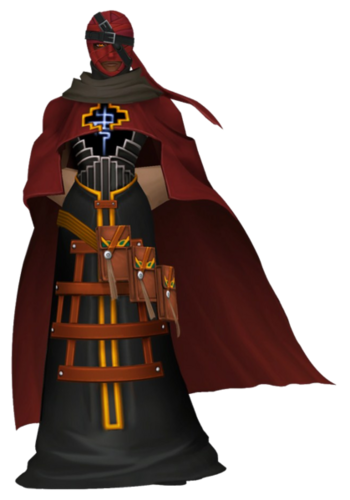 "It appears we've come to a standstill. This has gone on long enough. Riku... I think you know what needs to be done."
Click here

to see Ansem as he is now.

"I'm afraid that any world you try to create... Any world of yours... would be an empire of ignorance. That is why you and your creation are destined to fall!"

Once the kindly ruler of Radiant Garden, Ansem the Wise was cast into the Realm of Darkness by Terra-Xehanort when he turned Ansem's followers against him and took over the land. Adopting the alias DiZ ("Darkness in Zero"), Ansem eventually returned to the Realm of Light and plotted vengeance against Xemnas and Organization XIII, and intended to use Sora and those allied with him to do it.

"Radiant Garden shall not fall under the likes of you."

Dilan is the complete being of Xaldin. Dilan was one of Ansem's six apprentices who betrayed him by researching the Heartless.

"Well, let's say I have a feeling we are destined to cross paths again."

Even is the complete being of Vexen. He is one of the six apprentices of Ansem the Wise who betrayed him by researching the Heartless and destroying Radiant Garden.

"The castle is presently closed."

Aeleus is the complete being of Lexaeus. He was one of Ansem's treacherous apprentices.

Ienzo is the complete being of Zexion. Ienzo was an orphan adopted by Ansem the Wise, and the youngest of his apprentices.