Characters / King of the Hill - The Hills family (and Other Relatives) 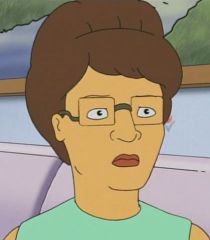 Two-time Substitute Teacher of the Year.
Voiced by: Kathy Najimy
"I am Peggy Hill, a citizen of the Republic of Texas. I work hard, I sweat hard and I love hard and I gotta smell good and look pretty while doing it. So, I comb my hair, I re-apply lipstick thirty times a day, I do your dishes, I wash clothes and I clean the house. Not because I have to, but because of a mutual, unspoken agreement that I have never brought up, because I am too much of a lady."

Peggy is Hank's wife, to whom he is Happily Married. Impulsive and somewhat ditzy, she sometimes causes trouble for the family with hare-brained ideas. She and Hank stay loyal to each other no matter what though. 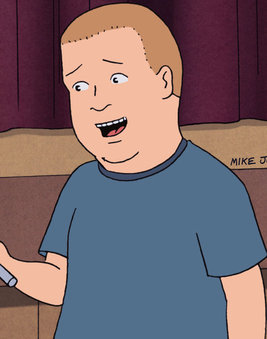 Hank: "That boy ain't right."
Voiced by: Pamela Adlon (English), Fujiko Takimoto (Japanese)
"To tell you the truth, Dad, that sounds boring. It's okay if you're into boring, but I'm not."

Bobby is Peggy and Hank's 13-year-old son, who wants to break into the entertainment business. Since he's kind of effeminate and has some strange interests (by his family's standards), Hank fears for the boy's future. He'll be all right, though. 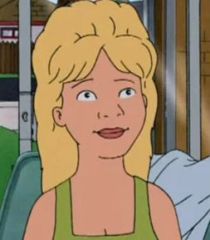 Voiced by: Brittany Murphy
"Class was cancelled today and the library was closed. I love college!"

Luanne is Peggy's niece, the daughter of her brother Hoyt. The Hills take her in early in the show's run, partially to get her away from her horrible mother Leanne. She shows a fair bit of skill in car repair during the early episodes and an ability to think for herself in a crisis at times, but is generally depicted as not being the sharpest knife in the drawer. She marries Elroy "Lucky" Kleinschmidt in "Lucky's Wedding Suit" and has a baby daughter by him named Gracie in "Monkey See, Lucky Do." 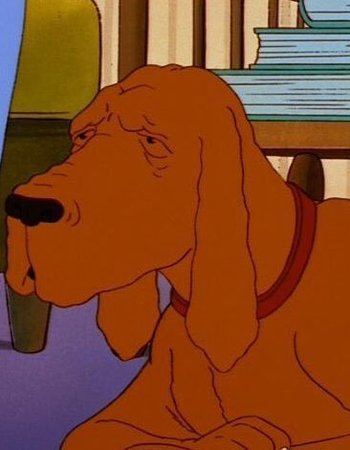 Hank's and the Hills' old female dog. It is no exaggeration to think Hank likes her more than Bobby or Luanne.
Other Hills
Advertisement:
Cotton Hill 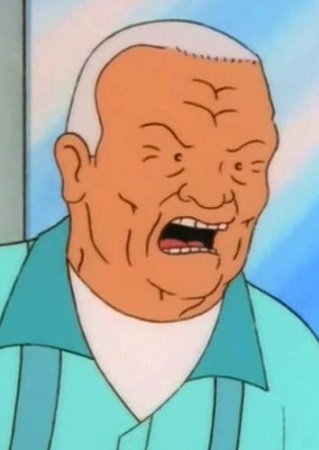 "I got my shins blown off in Japan. Don't tell me about your problems."
Voiced by: Toby Huss
"I killed fitty men!"

Hank's father, a crotchety old man who doesn't seem to approve of anything Hank does. This war vet can never stop talking about how he killed "fitty" (50) men while in service. When it comes to impulsiveness, he's even got Peggy beat. Heaven help Hank. His last appearance in the series sees him die from a horrible accident (or as he puts it, Tojo finally got him). 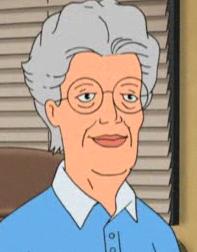 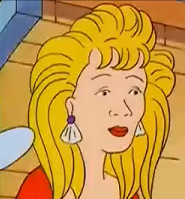 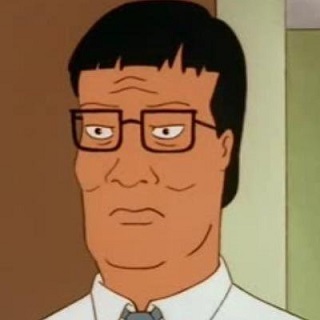 Cotton's Japanese son from a fling with Michiko, and Hank's older half-brother. Appearing in the Returning Japanese two-parter. 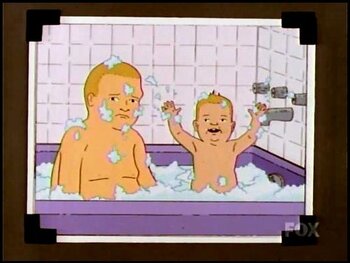 Cotton's infant son with Didi, which makes him Hank and Junichiro's much younger half-brother and 13-year-old Bobby's infant paternal uncle. 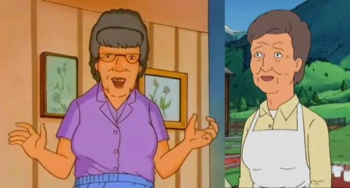 Voiced by: Mimi Rogers ("Square Peg"), Joanna Gleason ("A Rover Runs Through It") 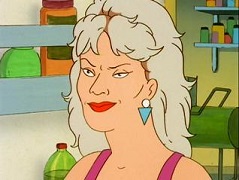 Luanne's alcoholic, ex-con mother. Was sent to jail for stabbing her husband Hoyt (Luanne's father and Peggy's brother) with a fork. 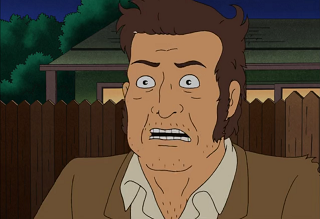 Luanne's biological father (even though earlier episodes revealed that Hoyt was a wussier, male version of Peggy), Peggy Hill's older brother, and Leanne Platter's ex-husband. He was once thought to have escaped to an oil rig to get away from his abusive wife (and wouldn't come back until he got her death certificate in a fax), but a later episode revealed that this was a cover story; Hoyt was in jail and, if he screws up again, he'll be there for life. 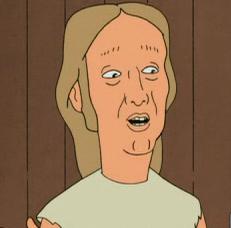 Slipped on pee-pee at the CostCo.
Voiced by: Tom Petty

A 35-year-old hillbilly introduced later in the series whose personal income consists primarily of nothing but personal injury suit victories. Becomes involved with Luanne, then later marries and has a child with her.