This index is for the main characters of Kill la Kill. Unmarked spoilers ahead.

General
Ryuko Matoi
The main character on a quest to discover who killed her father and avenge him.

"Fear is freedom! Subjugation is liberation! Contradiction is truth! Those are the facts of this world, and you will all surrender to them, you pigs in human clothing!"

The Student Council President of Honnouji Academy, and Ryuko's arch rival. Her goal: total world domination through the superpower-endowing Goku Uniforms. Her sword, Bakuzan, is enough to withstand even the awe-inspiring might of Ryuko's Kamui, Senketsu. Not one to let herself get outdone by anyone, however, she ends up donning her own Kamui, Junketsu,note "Purity" to counter Ryuko's. 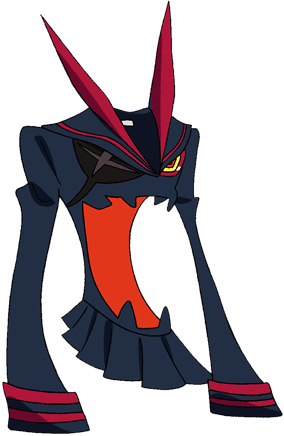 After suffering a crushing defeat by the Student Council, Ryuko finds this living Sailor Fuku beneath her house. Named Senketsunote "Fresh Blood" by Ryuko, he is a garment known as a Kamuinote "God Robe" that grants its wearer phenomenal abilities in exchange for their blood. He was made by Ryuko's father Isshin, though he doesn't remember much more than that.

"...And everybody knows that if you win at friendship, you win at life!"

A second-year No-Star student at Honnouji Academy who becomes Ryuko's best, and only, friend as soon as the two meet. She is a complete and utter airhead whose odd and overly-energetic antics never cease to baffle everyone around her. Nevertheless, she has a good heart and provides Ryuko with invaluable moral support.

As the Fight Club President 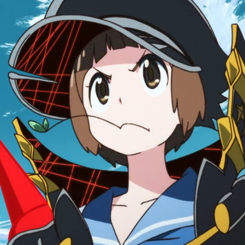 During episode 7, Mako, along with Ryuko, starts a Fight Club in order to abuse Satsuki's policies, but the Mankanshokus end up becoming ridiculously rich, with Mako forgetting her initial objective in the process and becoming engrossed in earning money for her family. Satsuki later gives Mako a powerful two-star Goku uniform in order to fight against Ryuko so she can maintain her family's new-found wealth.