The main heroine. Kanami is a Minoseki Academy student and Mai's best friend. After saving Hiyori from Yukari Origami's elite guard, she unexpectedly becomes involved in her mission against the Origami family.

A stoic and dedicated fighter who carries a grudge towards the Origami family for her mother's death. Her attempt to assassinate Yukari Origami sets the events of the series in motion.
Mai Yanase

A Toji from Renpu Girls School who is prized by its president. She is sent to apprehend Kanami and Hiyori and begins to question her own personal value.
Kaoru Mashiko

A lethargic and unmotivated Toji from Osafune Girls Academy. She stands out from other Toji for owning a tamed Aradama named Nene.
Ellen Kohagura

Another Osafune Girls Academy Toji. Excitable and fun-loving, she is nonetheless a skilled fighter who is often partnered with Kaoru.

The lead protagonist of the Tomoshibi storyline. A Minoseki student with a bright and positive personality, and a habit of saying "Where there's a will, there's a way" While her swordsmanship shines, her concentration tends to suffer.
Chie Setouchi

An Osafune Toji who gently and rigorously supports the members of the Investigation Squad as a self-appointed older sister. Five months after the End-Of-The-World Disaster, Chie has started attending college, but she still leads as the squad's deputy captain.
Kofuki Shichinosato

Kiyoka is a kind but timid Heijou student. Despite having immense swordfighting potential thanks to her family's history in kendo, she feared fighting the Aradama until she joined the Investigation Squad. 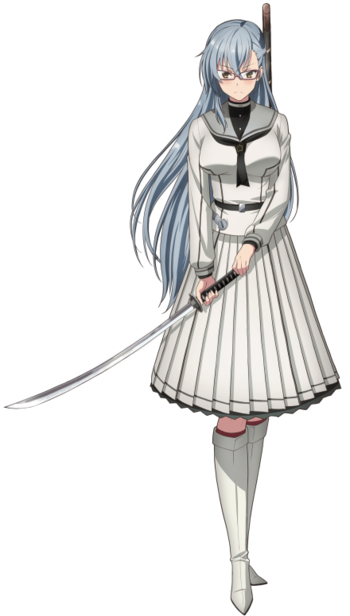 An Ayanokouji student who's gift for situation analysis and combat tactics easily made her the leader of the Investigation Squad. She's also a sword geek who can't help but run her mouth when her favorite topic comes up.
Yui Yamashiro 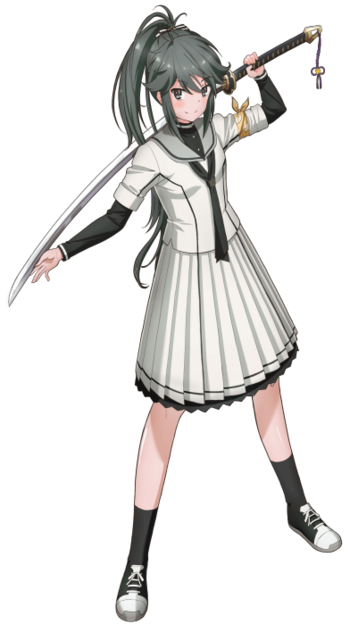 A later addition to the Investigation Squad, Yui is good at communication and can easily get along with anyone she meets. She is, however, a pervert who can't keep her hands off other girls.
Hirona Nitta

An Osafune student who is temporarily assigned to the Squad during the OVA to fill in the numbers. She believes in living efficiently, and putting in the energy only when it really matters. People thus get put off by her slow reactions and responses.

The chief of the National Police Agency Special Sword Administration Bureau, hero of the Great Sagami Bay Disaster, and the strongest Toji. Hiyori attempts to assassinate her at the beginning of the series, believing she is secretly a powerful Aradama manipulating the organisation behind the scene. 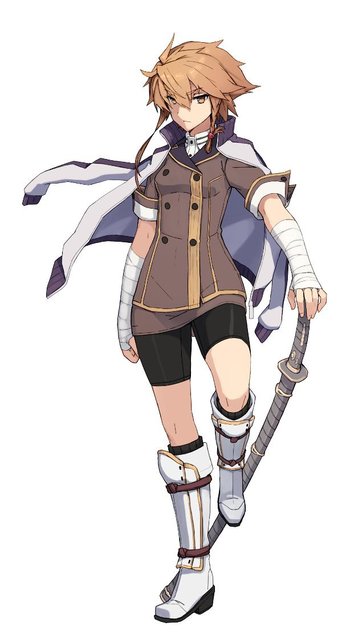 The second member of Yukari's Elite Guard. While playful and ladylike, she is nonetheless a talented fighter.
Yomi Satsuki

The third member of Yukari's Elite Guard. A disconcerting and seemingly emotionless woman whose performance does not seem to befit her prestigious position.
Yume Tsubakuro

The fourth member of Yukari's Elite Guard. Her sweet appearance quickly gives way to a bloodthirsty warrior always in search of a memorable fight. 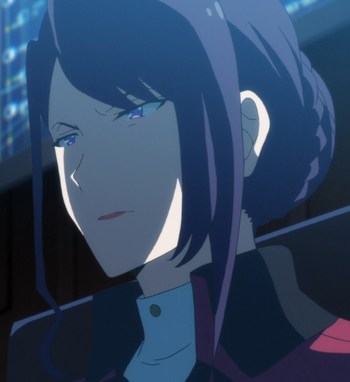 The unpleasant and irritable president of Renpu Girls School, one of the Five Schools that train Toji.
Minato Fujiwara 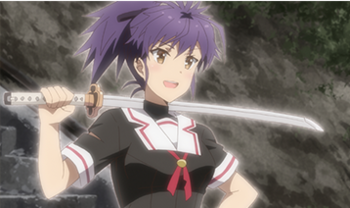 A teenager that Kanami keeps meeting in her dreams. She agrees to mentor her, providing both training and an open ear to Kanami's worries.
Kagari Jujō 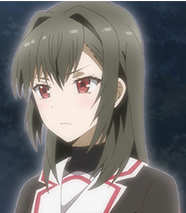 Hiyori's mother and a Toji who took part in the Great Sagami Bay Disaster 20 years ago. Her death spurs her daughter to avenge her.
Ayumu Uchizato 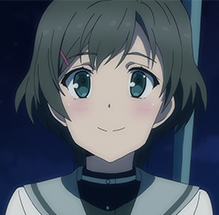 A Toji from Ayanokouji Martial Arts School introduced in the anime's second half.

In General
The monsters that the Toji have been fighting for over 400 years. Twenty years ago, the largest Aradama yet emerged, and came to be known as "Princess Tagitsu".
Princess Tagitsu 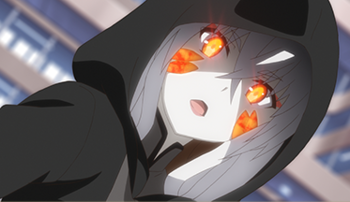 The great Aradama formed from the Great Sagami Bay Disaster 20 years ago, and ultimate Big Bad of the series. It spent the interim before the series fused with Yukari Origami, before being exorcised by Hiyori. Afterwards, it split into three separate existences, one of which retained its original identity and goals: to destroy humanity.
Princess Takiri 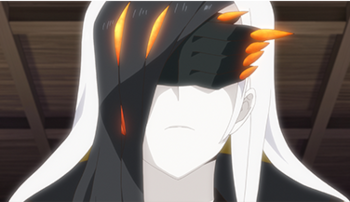 A fragment that broke off from the original Princess Tagitsu. Eventually she sought protection from the Japanese Ministry of Defense. When Princess Tagitsu reappears, she rebuffs all requests for aid with a simple ultimatum: Accept her unconditional rule as god-queen, or be destroyed by the other Princess.
Princess Ichikishima 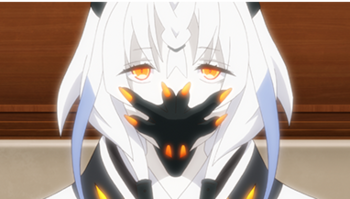 The third of the fragments of the original Princess Tagitsu. Inheriting the Aradama's loneliness, she ran to the Sword Administration for protection, believing she stands no chance against the other Princesses.
Humanoid Beast #02- 063 ("Kohime")

A new humanoid Aradama that appears five months after the End-Of-The-Year Disaster, she becomes the center of the Tomoshibi OVA. Unnamed in the beginning, Mihono names her Kohime. Unlike most Aradama, she seems helpless and defenseless, though there are signs she is capable of more. 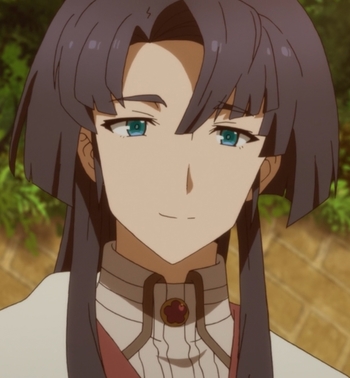 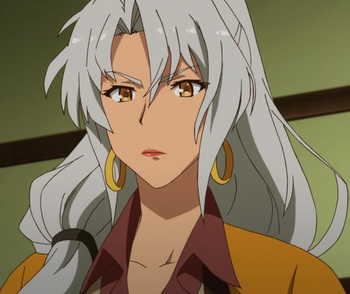 The president of Osafune Girls Academy, one of the Five Schools that trains Toji.
Richard Friedman 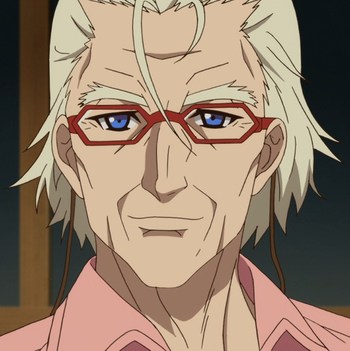 Ellen Kohagura's grandfather. He is an engineer from America who's famous for developing the Powered Armor used by the Toji to fight the Aradama.
Rui Onda 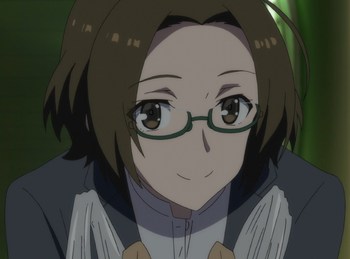 A former Toji who now secretly works for Mokusa.