Characters of the anime series Karas. 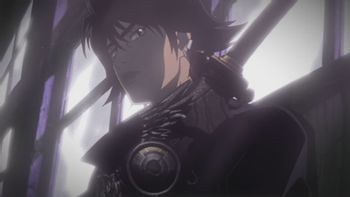 The recently-appointed Karas of Shinjuku, tasked with preserving the balance between the worlds of humanity and the youkai by the Will Of The City... and also with taking down his renegade predecessor, Eko. A quiet, kindly young man who has acquired the nickname of 'Doctor Karas' due to the medical help and counselling he offers to sick youkai when he's off-duty.

The series's main villain, the original Karas of Shinjuku. Grew disillusioned with the city's human population over the centuries, thanks to their perceived corruption and abandonment of the old ways at the expense of the youkai. Eventually decided to go completely rogue, imprisoning his Yurine and launching an assault on the city with his hand-picked band of mechanical monstrosities to reclaim it in the name of the youkai, even if he had to enslave every human in Shinjuku to do it.

A Karas from another town who popped over to see what was going on in Shinjuku. Prohibited from interfering with another city's business, but eventually cajoles her Yurine into letting her help Otoha out.

A renegade Mikura who fled Shinjuku some time ago, Nue

has returned to the city to settle old scores. Masquerading as a laid-back, homeless drifter who lives on the Shinjuku public transport system, he hunts down his former comrades whilst struggling against the bloodlust that threatens to consume him.

enlisted and upgraded by Eko to help him take over Shinjuku. Now masquerades as a professional wrestler, and feeds by snatching victims from public bathrooms.

is a calm, dapper gentleman in his human form, and a gigantic, wheeled abomination in his Mikura form. He feeds from motorists in Shinjuku's road tunnels, distracting them with his alternate form of a phantasmic red car before ambushing them from behind.

is a quiet, beautiful woman half the time, and a giant, loathsome mechanical spider for the other half. She is loyal, efficient, and frequently assigned by Eko to the missions he deems most crucial to his cause.

Perhaps the strangest of the Mikura, Kamaitachi

is a whirling, bladed berserker with a grating, mechanical voice and no apparent human form. Given his high visibility, he rarely ventures outside Eko's headquarters except on the few occasions when the centuries-old Karas doesn't care about being subtle and just wants something dead quickly.

takes the form of a hulking, gear-toothed bull/spider hybrid. His human form is decidedly more notable, though.