The antagonists of the series Karakuridouji Ultimo. A group of doji who embody a trait of evil, and their masters. Their meeting place is The Evil Doji master K's apartment.

open/close all folders
K and Vice

The master and doji of pure evil and leaders of The Evil Doji Branch. 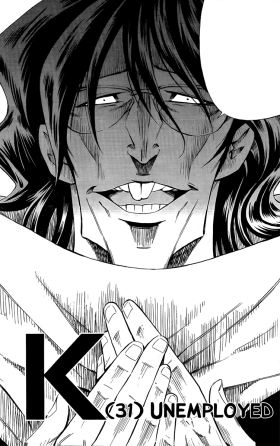 "With Vice in my power I would never have to work again!"

A 32-year-old unemployed man who wishes to be called "The Vice Master", in his past life he was the Emperor. Note that all badass tropes associated with him will be subverted because really, would you consider this guy to be cool? 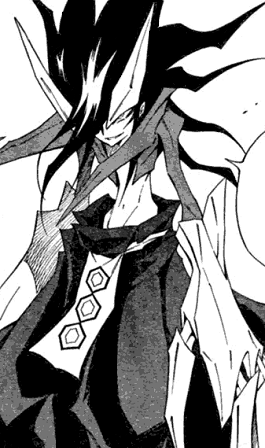 "Good doji...I COULD KILL ALL OF YOU A HUNDRED TIMES OVER!!"

Just as Ultimo is the greatest of the Good doji, Vice is the ultimate form of Evil. You can pretty much guess what his nature and personality are from that fact. His master in the present is K. It is currently unknown if, in the past, he even had a master.

His Karakuri Henge themes are turtles and demons.

Voiced by Takashi Ohara in the V comic.

The doji and masters of Envy and members of The Seven Deadly Sins. Iruma was the former master, replaced by Rune very early in the series. 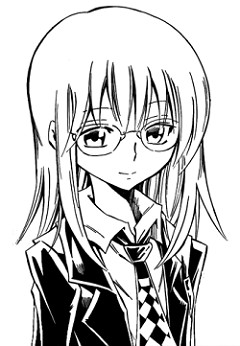 "When you learn the truth, you will be mine!"

Yamato's best friend since the fifth grade. He had a rather insecure, yet empathetic personality before he met Jealous. Afterward he seems to display much more confidence, but also cruelty. His family is apparently rich, as he has a huge mansion (in Tokyo, no less). In his past life he was a princess who married Yamato, before Ultimo slaughtered her because of her status as a noble. His undying love for Yamato that has carried onto the present lets Jealousy convince him to become his master.

Voiced by Hitomi Nabatame in the V comic.

"I can see...your past and future...and the darkness, the swirling envy in your heart." 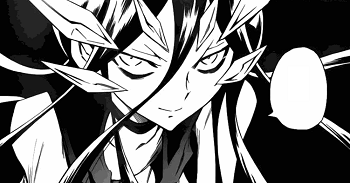 An Evil doji that embodies envy of the Seven Deadly Sins. He is the second doji Ultimo and Yamato (not to mention the reader) are introduced to, both in the past and in the present. He has a very sarcastic, angry personality behind an often stoic expression. His master was Iruma Tomomitsu, until he stabs him in the back. His new master is now Rune Kodaira, though he's been wanting Yamato for his master.

His Karakuri Henge theme is spiders.

"I am deeply dissapointed that you common folk, you drones, do not recognize me."

The former master of Jealousy. He's a corrupt, immoral politician. It's interesting to note, however, that he came from a poor background (at least in the past).

The master and doji of lust, and members of The Seven Deadly Sins. 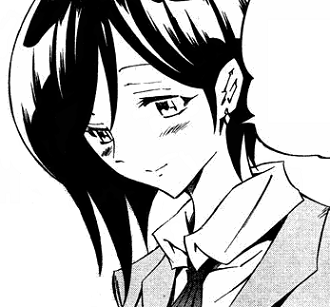 A 27-year-old elementary school teacher. Almost like Vice and K's relationship, she's prone to blushing and submitting to her doji. Unlike a lot of the other evil doji masters, she really does love and care for her doji. Despite her age, she's never had a boyfriend, (so she's most likley a virgin as well)and worries about it constantly. It's because of this that Desir picked her for a master. 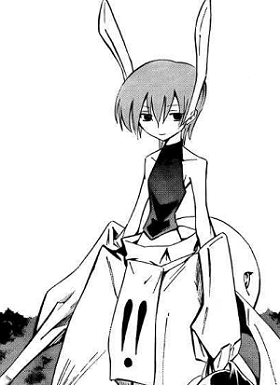 The embodiment of Lust. While he has a kind face, he seems to have a very violent personality. He seems to be very close with his master.

His Karakuri Henge theme is bunnies.

The doji and master of sloth, and members of The Seven Deadly Sins.

"Didn't I tell you? Make a wrong move and you die." 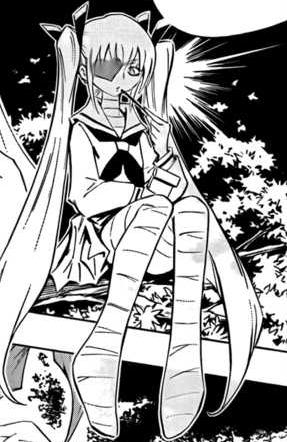 A 15-year-old goth girl. Even though she's the master of the Sloth doji, she seems to be able to take action very quickly. 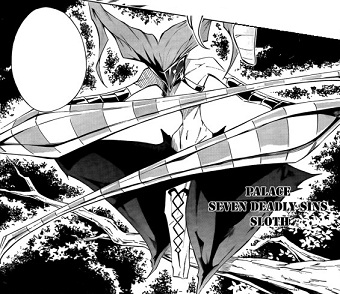 The embodiment of Sloth. So far, he's the doji the fandom knows the least about, which only increases his popularity.

His Karakuri Henge theme is snakes.

The doji and master of wrath, and members of the Seven Deadly Sins.

"I'm sorry, but I can't allow you to interfere. We will be your opponents." 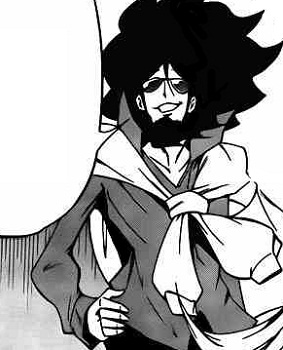 A 39-year-old music producer. Ironically, he has a rather calm and laid back personality. 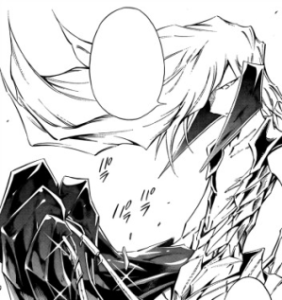 "Cut the stupid chit-chat, Fussa. It's irritating. He came for a fight, so let's rumble."

The embodiment of wrath. Known for his rather unrealistic hairstyle.

His Karakuri Henge theme seems to be the bull.

The doji and master of pride, and members of The Seven Deadly Sins. 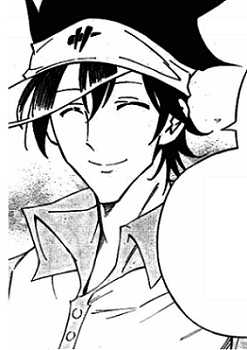 "I will throw Agari Yamato, the greatest good master, down into hell."

An 18-year-old famous pro golfer. Calm, but manipulative, and with a streak of arrogance. 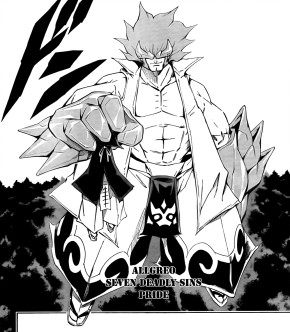 As the doji of pride, Orgullo is prone to boasting about his own skills and belittling the skills of his enemies. But, this isn't a constant trait. He shows a surprising amount of respect to his master, and a surprising calmness.

His theme animal seems to be lions.

The master and doji of gluttony, and members of The Seven Deadly Sins. 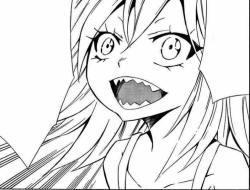 "Agari Yamato...are you laughing at me cuz I'm a child?"

A five-year-old orphan who's Edile/Eater's master of the Seven Deadly Sins. 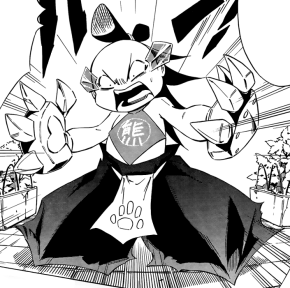 At first, he was thought to be a three story tall doji, of incredible bulk. His actually from is a short and more childish version of his bigger from. He has a bit of a reckless personality.

His theme animal is bears.

The master and doji of greed, and members of The Seven deadly Sins. 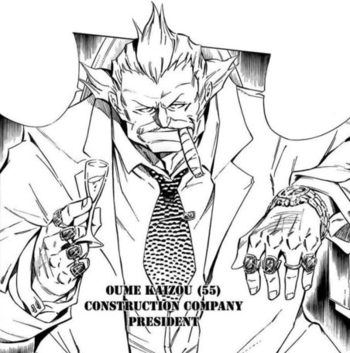 A 55-year-old construction company presidant. He shares the same last name as Hibari Oume, implying that the two are related. 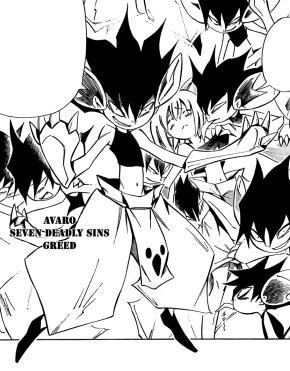 A doji with a greedy and perverted personality.

His theme animal seems to be mice.

Tropes associated with Avaro:
Replacement Masters/Allies
Characters that have replaced any of the Evil Doji Branch's original masters, or are simply evil.

A little kid that appears in Chapter 27, who wants to be Vice's master. Three pages in however, Vice stabs him with his gauntlet. Not that it does anything though...