This is a partial character sheet for Kamen Rider Wizard. Visit here for the main character index. Subjective trope and audience reactions should go on the YMMV page. 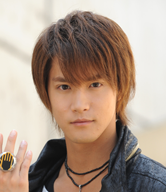 A survivor of the dark magical ritual, he was able to subdue his emerging Phantom by holding onto hope. This gave him the ability to use magic through the equipment granted to him by the wizard in white.

Tropes exclusive to him as Kamen Rider Wizard

Haruto's inner Phantom, and the source of his powers.

A mysterious young girl who was given to Haruto by the White Wizard. She has the supernatural ability to discern Phantoms through their human disguises. According to the White Wizard, she was a victim that died in the same Sabbath ritual that Haruto suffered through; though her body somehow stayed intact and can be kept reanimated by a wizard's mana.

He's lying, partially. She is a reanimated corpse, but she died of natural causes. Her father Fueki turned to magic and became the White Wizard to try and save her, keeping her "alive" with the Philosopher's Stone and performing the Sabbath in an attempt to resurrect her completely.

A keen archaeologist and gemcutter. He creates the rings that Kamen Rider Wizard uses in his magic, carving the gems and then setting them in the rings.

A rookie detective who is devoted to protecting the lives of innocents. She has become interested in Kamen Rider Wizard after being saved by him, and because he is the key to fighting the Phantoms that threaten the city.

A wizardry fanboy who wants to become Haruto's apprentice.

The manager of a local donut-focused food truck, the Donut Shop Hungry. He likes Haruto, who is a loyal customer, even though Haruto only ever buys the plain sugar donuts.

A mysterious wizard in white robes who gives Haruto the equipment needed to fight the Phantoms. Later in the series he's shown to be even more ambiguous than first thought, and is revealed to be Wiseman, leader of the Phantoms. 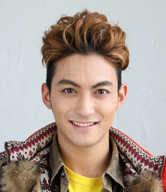 A student archeologist who discovered a mysterious belt known as the Beast Driver in one of his expeditions.

Tropes exclusive to him as Kamen Rider Beast

Nitoh's Phantom, though unlike other Phantoms, it was not manifested within Nitoh. Instead, it was sealed inside the Beast Driver a long time ago, when magic and science were used together. It merged with Nitoh when he discovered and first used the Beast Driver.

The twin sister of Misa Inamori a.k.a. Medusa. She, like Haruto, managed to suppress her phantom and after training with the White Wizard, returns as a witch.

Tropes exclusive to him as Kamen Rider Mage

A young gate targeted by the phantom Sylphi. Driven to despair but manages to hold back his phantom. He eventually becomes the blue Kamen Rider Mage.

A soon-to-be father targeted by the phantom Arachne. Driven to despair but manages to hold back his Phantom. He eventually becomes the green Kamen Rider Mage.

The head of Section Zero who reluctantly helps out in the battle against the Phantoms.