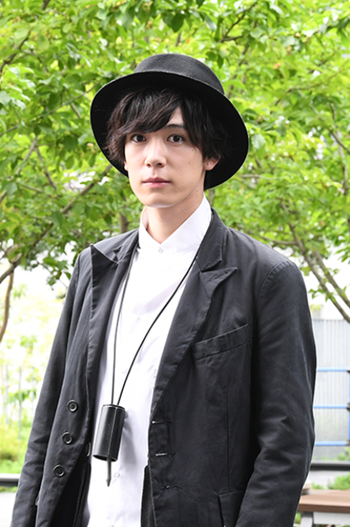 This story's ending is for me to decide!

The protagonist and titular rider of Saber. A fantasy novelist and owner of Fantastic Kamiyama Bookstore, Touma is chosen to become Kamen Rider Saber roped into stopping the reality-eating Megid from replacing his reality with their own. 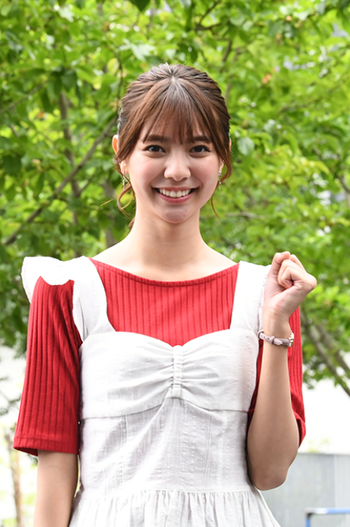 Touma's friend and current editor. While energetic and social-media obsessed, she has to keep Touma in check so that he can meet his deadlines. 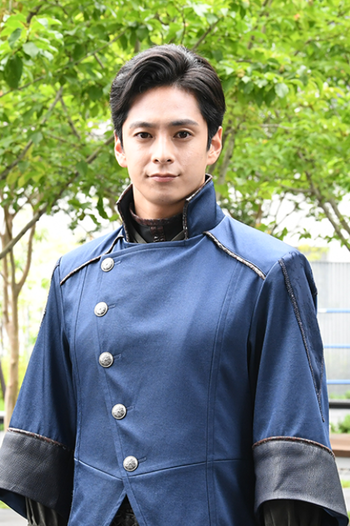 I swear on Suiseiken Nagare that I shall protect this world!

The water swordsman of "Sword of Logos", an organization that is sworn to protect and keep the power of "Wonder World". He wields the Sword of Water Nagare and transforms into Kamen Rider Blades. 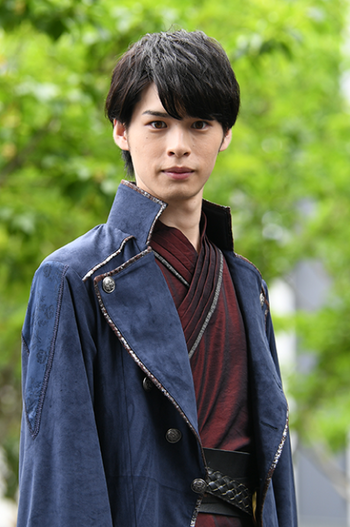 The lightning swordsman of Swords of Logos who wields the Sword of Lightning Ikazuchi, transforming into Kamen Rider Espada. He is a childhood friend of Touma's. 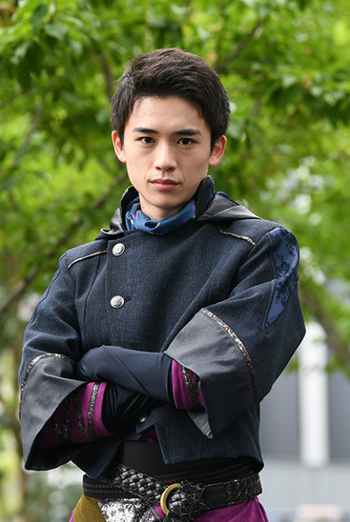 The wind swordsman of Sword of Logos who wields the Sword of Wind Hayate, transforming into Kamen Rider Kenzan. He has a strong sense of justice and a rivalry with the Sage's childhood friend, who just so happens to be Touma. 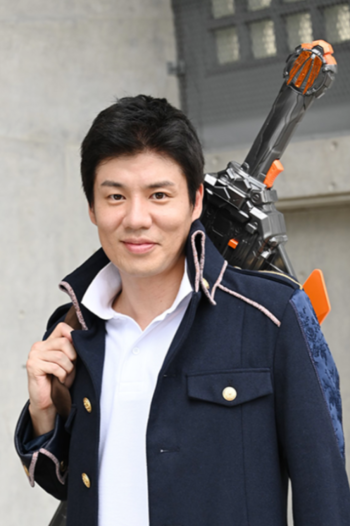 One: evil rascals... Two: shall feel the earth's rage... Three: It's already decided, so there's no point in arguing!

The earth swordsman of Sword of Logos who wields the Sword of Earth Gekido transforming into Kamen Rider Buster. He is the strongest swordsman in the Order, and as such is a powerful Rider. In addition, he raises his son Sora alone. He fought alongside Calibur in the Order and considered him a friend. As such he wants to find out why he ultimately betrayed them.

The previous user of the Sword of Flames, Rekka. Fifteen years ago, he saved Touma from Calibur and the Megiddo, passing off the Brave Dragon WonderRide Book. His whereabouts unknown, he appears in Touma's dream. 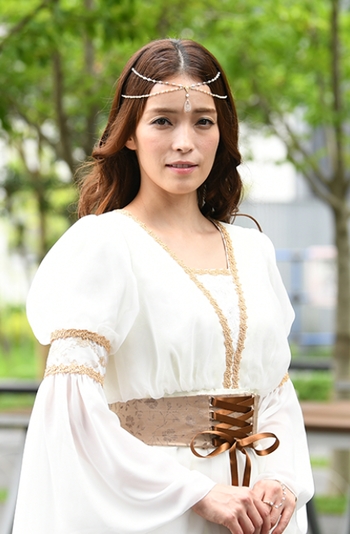 A mysterious woman that is the founder of Swords of Logos, helping to protect the books that made the world. 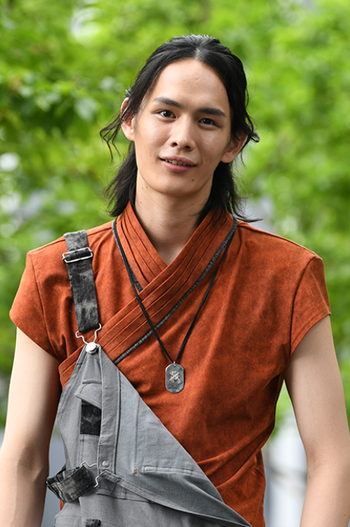 A mechanic that maintains the swords of Sword of Logos and the Wonderide Books.

A former member of Sword of Logos and Kento's father, who betrayed his comrades and sent the Megid to Earth. He wields the evil Sword of Darkness Kurayami.
Storious 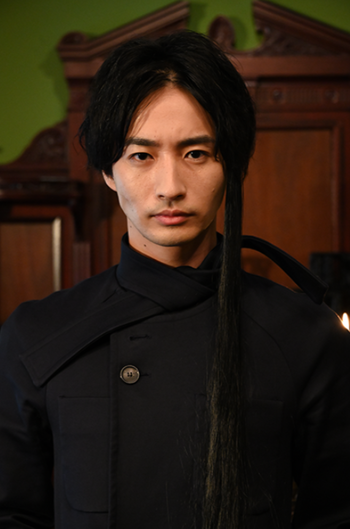 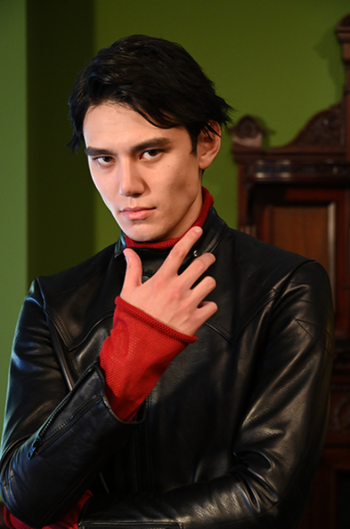 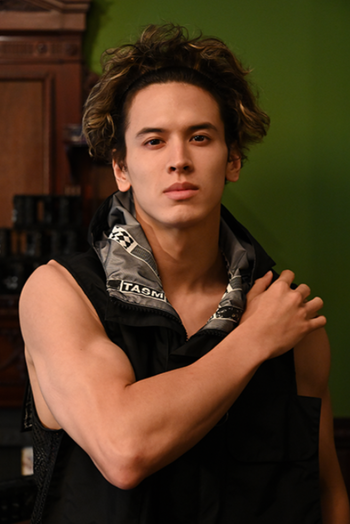 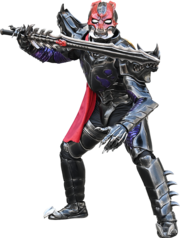 A fusion Mamono who is a hybrid between Fenrir, the Japanese tiger beetle, and ''The Singing Bone''

, released from the Desast Alter Ride Book by Calibur. 15 years ago, he killed several swordsmen of Swords of Logos and came to blows with Ryo Ogami.
Shimi
Footsoldiers of the Megid. Like the Mamono, they are summoned from Alter Ride Book pages, but they are not tied to any specific book.
Mamono
An evil race of monsters that live in Wonder World, born from Megid using Alter Ride Books. They come in three classes, "fairy tale stories", "legendary creatures," and "regular animals".

A legendary creature Mamono released from the Gansekiou Golemnote "Stone King Golem" Alter Ride Book, based on the Golem.

A pair of fairy tale Mamono released from the Ari ka Kirigirisunote "Ant and Grasshopper" Alter Ride Book, based on The Grasshopper and the Ants. 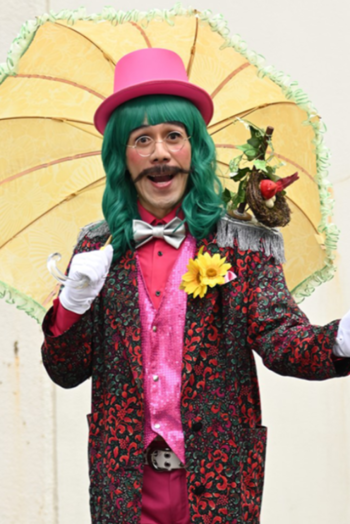 A mysterious performer and storyteller from Wonder World. Unknown to everyone, he reads off Touma's successes as if he were reading off a story.