This is a partial character sheet for Kamen Rider Ghost. Visit here for the main character index. Subjective trope and audience reactions should go on the YMMV page.

The Gamma are the main antagonistic force in Kamen Rider Ghost. A race of demonic spirits from another realm that can be summoned into our world through a magic portal known as a Gamma Hole. These are the work of the Mysterious Man, a black-clad sorcerer, though it is unknown if he's working with, serving, or actually using the Gamma for his own means.

The Gamma see humanity as nothing more than tools to be used, or as prey to be killed for pleasure. Their main goals it to bring more Gamma to the human world, as only few of them can come out of a normal Gamma Hole. 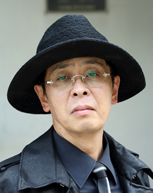 A man who knows the truth about the Eyecons and has the ability to summon Gamma. 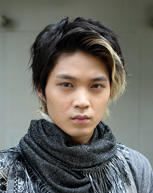 Youngest child of the Gamma World's ruler, he initially works alongside Saionji to obtain the 15 Ghost Eyecons and bring forth an army of Gamma with the intent of invading the human world.

With the Mega Ulorder, Alain can assume his own Rider form known as Kamen Rider Necrom.

Tropes exclusive to him as Kamen Rider Necrom 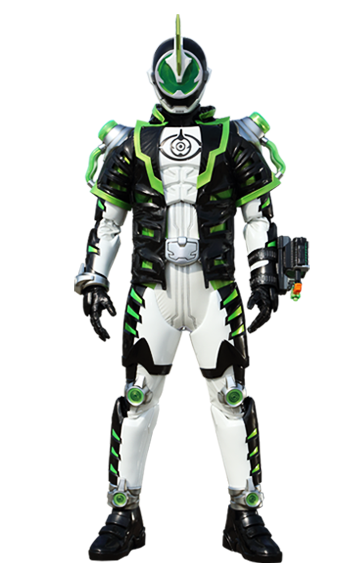 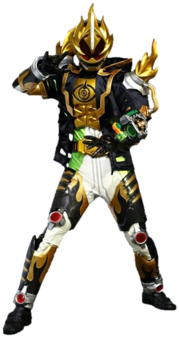 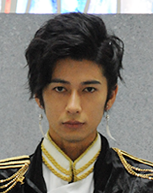 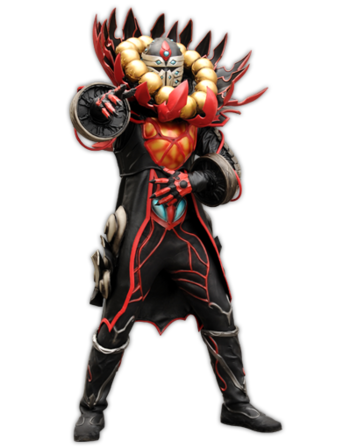 Alain's older brother. He desires the Ghost Eyecons as well to enact his own desires... 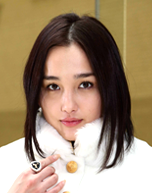 Alain and Adel's older sister. She seems to be the one who took the Fukami siblings under her care when they were stranded in the the Gamma world. She eventually becomes Kamen Rider Necrom Pink. 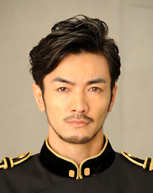 A human-looking Gamma who can use a special Eyecon to transform into the stronger Superior Gamma. He was sent by Alain's father, Emperor Adonis, to Earth to aid his son in their plans. 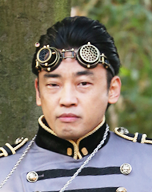 Another Superior Gamma like Javel, this one working as a scientist. He possesses a prototype version of the Mega Ulorder, what can use Gamma Eyecons to empower his Superior Gamma form further. He is Adel's subordinate and only obeys his order and not Alain's. 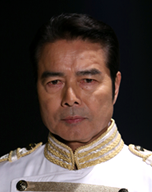 Emperor of the Gamma and father of Alain, Adel and Alia. Sent Javel to assist Alain.

The president of the Deep Connect company. While outwardly an ally to the Paranormal Investigation Labs, he is actually Gamma-possessed and under Igor's control so that his company can be used as a front for the Gamma's Demia Project.

Alain's former instructor. Considered by Igor to be Javel's replacement.

A clone of Makoto Fukami sent by Adel that transforms into Kamen Rider Specter. To distinguish himself from the real one, he wears the Gamma's military uniform as opposed to the real Makoto wearing leather. It was later revealed that doppelgängers were a side effect of Makoto's usage of the Deep Specter Eyecon. The Eyecon draws power from the Gammaizers to give it incredible strength, hence the Gammaizers created the doppelgängers as a counter to this. Specter's V-Cinema retcons this into the 15 Makoto Doppelgangers being incomplete prototypes of Makoto that were stolen from Danton.

Tropes exclusive to him as Kamen Rider Specter

The wife of Adonis and mother of Argos, Alia, Adel, and Alain. Her death from an illness drove Adonis to create the Gamma World.

The 15 "Protector Gods" of the Gamma world, their job is to protect the Gamma world from outside threats. They materialize from the 15 monoliths in the Gamma Emperor's prayer room.

Gamma of the Week

A Gamma that was summoned and empowered alongside the Gamma that would become Yari. With Yari, Katana wreaked havoc on the city in search of the Eyecons until he met our hero... and killed him. Thankfully, he soon came back to fight back. After Yari's death, Katana was next, and goaded Ghost to follow him. After some Bike-Fu, Katana summons some Gamma Commandos to tire out Ghost, only for Ghost to find the Musashi Ghost and Musashi Eyecon.

A Gamma that was summoned and empowered alongside the Gamma that would become Katana. With Katana, Yari wreaked havoc on the city in search of the Eyecons until they meet our hero... and Katana killed him. Thankfully, he soon came back to fight back, which ends up getting Yari killed. 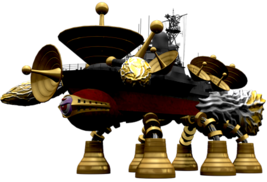 A Gamma who was summoned courtesy to Dr. Sonoda who uses the doctor to turn his idea of a teleportation device to a device what would create a giant Gamma Hole. While successful on creating the device and almost opening it after fusing with Edison Parka Ghost, his plan was stopped by Takeru and was killed off when he acquired Edison Damshii. 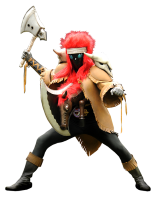 A Gamma who was summoned to help out Mari Shirase in her Robin Hood-like crime spree as Little John. His true objective, however, was to corrupt her so that her soul would turn into an Eyecon in order to gain the Robin Hood Eyecon. His plan was foiled when Takeru broke Mari out of his influence and then used Robin Hood Eyecon to take him down.

A Gamma who assisted a Primal Body Gamma who was possessing Sakuma Risa in an attempt to gain the Nobunaga Eyecon, with his role being to spread his clones across different places to eventually raise a part of a city into the skies to create "Azuchi Castle" to Hashiba Nobuyoshi to further his corruption. They were almost successful before Ghost arrived and was able to defeat Book Gamma.

A Gamma who alongside his "famiglia" was send into an elementary school for an unknown plan, with him making sure no one gets into the school. His plan manages to be successful, but only after Ghost defeats some of his companions, after which Specters drops in and finishes the job. 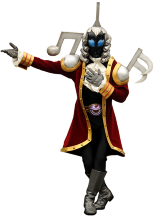 A Gamma what was summoned courtesy of Kousuke Kimijima, whom he helped on composing his next masterpiece. However, his true plan was to make him connect with Beethoven so that he can then make Kousuke kill himself and such create the Beethoven Eyecon. His plan was foiled when Takeru broke his influence over Kousuke and summoned the Beethoven Parka Ghost, eventually leading his defeat.

He comes back in Episode 27 by Igor's will in order to create a composition to the launch event for Demia Project. However, he soon finds out that Igor isn't particularly interested in classical music at all... 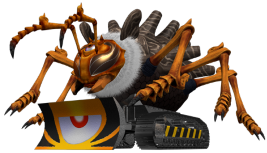 A Gamma who used her insects to take control of a neighbourhood of people for the purpose of helping the Gamma to create a new monolith for unknown usage. While she provided to be one of the most persistent Gamma what Ghost has faced, he was able to break the people out of her control and defeat her once and for all. 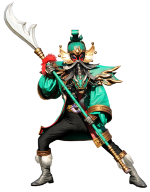 A Gamma summoned by Saionji for the purpose of creating the last remaining Eyecon needed for his plan, after which he is ordered to get the Eyecons what Takeru and Makoto had in their hands. He is successful on getting Takeru create the Benkei Eyecon, but only manages to get Makoto's Eyecons before he can get his hands on Takeru's collection, even if it puts Saionji in favourable situation. 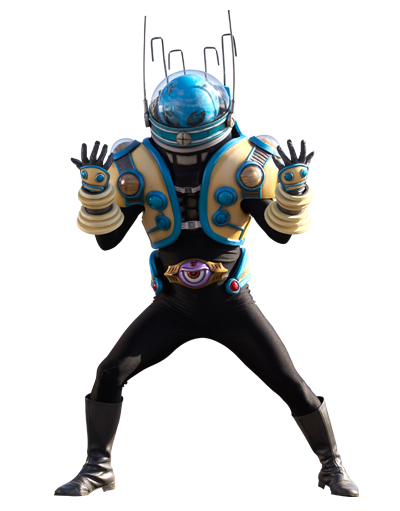 A Gamma that Alain empowered alongside a new Katana Gamma to take over a Satellite that they can use to rapidly advance their operations. He used his electronic powers to attack anyone talking on a Cellphone or Smartphone, and then helped Alain take over a Radio Telescope so they could take control of the Satellite. 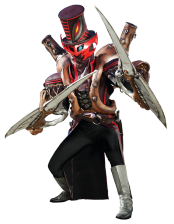 A Gamma who came to Earth alongside Igor to kill innocent people to gather up souls for him. After a long killing spree, he was eventually discovered with help of Miwako Hino, and Ghost managed to save the captured souls from Igor and destroy the Knife Gamma

A Gamma who came to Earth alongside Igor in order to help him infiltrate a company building, after which Igor send him to paint more of the city. Unlike other Gamma, however, he has no real malice, and only wishes to just paint stuff.

As his project is advancing, Igor summons a sword-wielding Gamma to take care of Ghost and Specter in order to gain their Eyecons. However, she is less effective than he hopes for, due of her code of chivalry conflicting on just finishing the job. 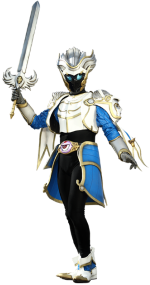 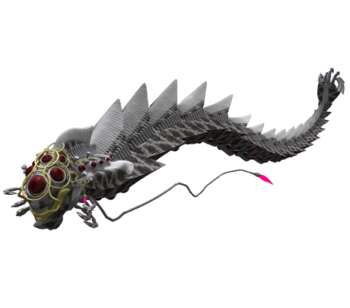 Gigantic serpent-like creatures from the same world as the Gamma that serve them.