This is a partial character sheet for Kamen Rider Double. Visit here for the main character index. Subjective trope and audience reactions should go on the YMMV page.

Now, count up your sins!

Shotaro Hidari was the protege of the late great Hardboiled Detective Sokichi Narumi. Philip is a mysterious boy possessing the True Gaia Memory and gifted with all the world's knowledge inside his head. Together, They Fight Crime! by Sharing a Body as Double. 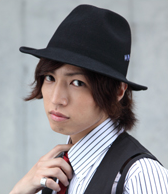 Shotaro was the protege of the private detective Sokichi Narumi. Upon the events of Begins Night he takes up on his mentor's mantle, solving Dopant cases. His Gaia Memories, featured on the left side of Double, grant Double a weapon or a fighting style. In the second movie, he takes on the mantle of Kamen Rider Joker after Philip is kidnapped, using a Lost Driver and the Joker Memory to transform. He resumes the mantle of Kamen Rider Joker in the series finale upon Philip's disappearance. 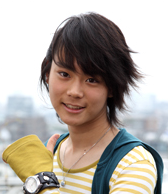 Philip is a mysterious boy, possessing the True Gaia Memory. He was rescued by Sokichi Narumi and Shotaro during the events of Begins Night. He aids Shotaro in solving Dopant cases by accessing the Gaia Library, allowing him to look up endless amounts of information. This ability also lends itself to his obsession with research. His Gaia Memories, on Double's right, grant him an elemental power, or in FangJoker's case, an upgrade. Is kidnapped in The Movie for NEVER's plans, yet Shotaro rescues him and the two defeat Kamen Rider Eternal. Later, Philip is revealed to have died twelve years prior to the series, being resurrected as an avatar of the Gaia Memory. Due to this and Ryubee initiating the Gaia Impact, which eventually failed, Philip slowly broke down into data, until a transformation into Double would make him disappear forever. However, Wakana eventually learns the truth, sacrificing her own body to provide a way for Philip to regenerate in the recreated Xtreme Memory.

Akiko is the Boss's daughter, coming in to replace her father. As Shotaro's landlady she proclaims herself as the Chief of the Narumi Detective Agency, specializing in Dopant cases.
Sokichi Narumi/Kamen Rider Skull

Sokichi Narumi was Shotaro's boss, who taught the young man the trade of a Private Detective. During a mission to liberate a young man he dubbed Philip, he was shot to death. The events of Movie Wars 2010 reveal that he was Kamen Rider Skull, while Movie Wars CORE is a Whole Episode Flashback showing him as Skull Crystal ten years before the Double TV series.

Tropes exclusive to him as Kamen Rider Skull 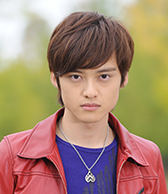 Ryu Terui is a police superintendent assigned to the Futo Police Department's Paranormal Crime Investigation Division, and is thus Jinno and Makura's superior. His family was murdered by a man with a W memory, giving him a motivation to exact revenge. When he meets up with the enigmatic Shroud, she gives him his gear, allowing him to transform into Kamen Rider Accel.

Tropes exclusive to him as Kamen Rider Accel

Detective Jinno is a friend of Shotaro's, frequently letting him deal with Dopant cases. He is never seen without his trademark back scratcher.
Detective Shun Makura

A man who dresses as Santa Claus and wanders around Futo handing out presents.
Queen & Elizabeth

A pair of "street" teenage girls seen together.